GLASGOW —- For as long as there have been international climate talks, Saleemul Huq, a botanist from Bangladesh, has quietly counseled diplomats and activists from the global south on the prickliest question: What is owed to countries least responsible for the problem of global warming but most harmed by its effects — and by whom?

This year, there’s a big shift.

Year after year, calls have steadily grown louder for industrialized nations responsible for the greenhouse gas emissions already heating up the planet to own up to the problem — and pay for the damage.

This year, demands for redress have sharpenedas climate justice has become a rallying cry, not just from countries in the global south, like Mr. Huq’s, but from a broad range of activists, especially young people, in the United States and Europe. They have peaked in Glasgow: As negotiations close this week, a major point of contention between rich and poor countries is whether the final summit document willacknowledge the need for a separate pool of money to address historic harms.

Known by sterile code words crafted to avoid blame, “loss and damage,” that fund would be separate from money to help poor countries adapt to a changing climate, its proponents have argued. Loss and damage is a matter of historic responsibility and would pay for irreparable losses, such as the disappearance of national territory, culture and ecosystems, they said.

“The term ‘loss and damage’ is a euphemism for terms we’re not allowed to use, which are ‘liability and compensation,’” Mr. Huq said. “‘Reparations’ is even worse.”

The United States, which is the largest emitter of greenhouse gases historically, has long been cool to the idea. But in Glasgow, it signed a statement agreeing to “increase resources” for loss and damage, without committing to anything more specific. The U.S. climate envoy, John Kerry, said Thursday that any agreement on loss and damage would have to shield countries from legal claims. “We’re going to work hard to deal with that issue over here,” he said.

In the real world, beyond the windowless chambers where negotiators are arguing over the words of the final document, three factors have made it harder to ignore the demands for loss and damage money.

Courts around the world are already hearing liability cases against governments and fossil fuel companies, and in some cases ruling against those governments and companies for the damages they have already caused.

Second, it has become impossible for leaders of wealthy countries to ignore big ticket losses and damages when extreme weather events exacerbated by rising temperatures are taking a toll in their own countries, including record wildfires this year in California and floods in Germany.

“We have entered what I call the era of loss and damage,” Mr. Huq said.

Saleemul Huq, a botanist and director of the International Centre for Climate Change and Development, at the COP26 summit in Glasgow on Monday.Credit…Alberto Pezzali/Associated Press

Perhaps most importantly, Nicola Sturgeon, the prime minister of Scotland, broke something of a taboo among rich countries. She said Scotland would devote 2 million pounds, about $2.8 million, to address what it called “structural inequalities.”

“Finance is key to this not as an act of charity but as an act of reparation,” she said Thursday at the summit. She called on rich countries to “start to pay their debt to the developing countries around the world. It is not longer any excuse for not doing so.”

Mr. Huq called Ms. Sturgeon’s announcement a vital diplomatic nudge. Scotland, after all, describes itself as the birthplace of the Industrial Revolution, a center of shipbuilding and heavy industry, which profited handsomely from British colonialism and the African slave trade before that.

Scotland’s pledge is “not for charity, not for helping poor people, but taking responsibility and paying a debt to the people who are going to be affected,” Mr. Huq said. “She’s looking for a coalition of the willing.”

The latest draft statement from the summit, released early Wednesday, says very little about loss and damage except to cite the “urgency of scaling up action and support, including finance” for loss and damage.It says nothing specific about setting up a separate funding stream, nor how much. This led a bloc of island nations to say that emerging economies would not put forth more ambitious emissions reductions targets, “if we don’t scale up the provision of finance, and this includes the long overdue recognition of a separate and additional component for loss and damage.”

A vigorous fight on the issue is expected in the closing hours of the summit. “I think there has been a change in the way all parties are approaching this,” Alok Sharma, the summit president said on Thursday afternoon.

In a video released for the COP26 United Nations climate summit, Simon Kofe, the Tuvaluan foreign minister, pushed for an acceleration of global efforts to address climate change while standing knee-deep in seawater.

In Tuvalu, we are living the realities of climate change, sea-level rise as you stand watching me today at COP26. We cannot wait for speeches when the sea is rising around us all the time. Climate mobility must come to the forefront. We must take bold alternative action today to secure tomorrow. 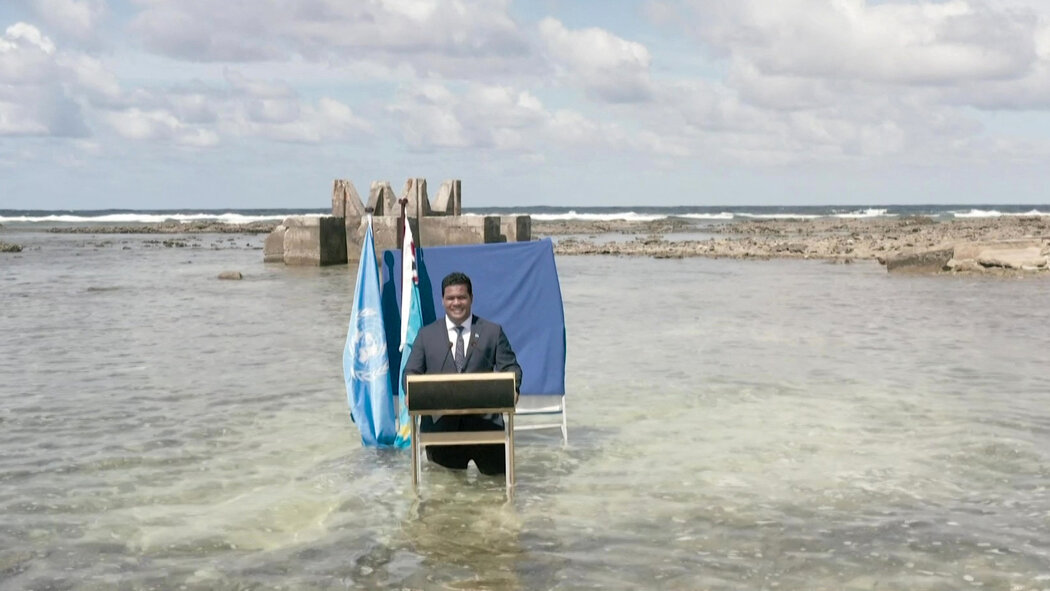 In a video released for the COP26 United Nations climate summit, Simon Kofe, the Tuvaluan foreign minister, pushed for an acceleration of global efforts to address climate change while standing knee-deep in seawater.CreditCredit…The Ministry of Justice, via Agence France-Presse — Getty Images

Mr. Huq, now 69, sat with a can of Irn-bru, the Scottish soda, in his hand under a giant inflated globe in a large auditorium known here as the Action Zone one day this week. A steady stream of people came to consult and talk. At one point, a 10-foot-tall puppet, named Little Amal, walked through the room, to which Mr. Huq appeared oblivious. This is what he likes to do at every summit — plant himself in one spot and have people pay him a visit, he said. He has come to each one since the first climate change convention was negotiated in Rio in 1992.

Loss and damage was first championed by countries in the Pacific Ocean, and then embraced by a widening group of developing world countries. All the while, the real losses and damages kept piling up. Storms washed away crops. Droughts turned farmland to desert. Scientists got better at pinpointing the role of the warming planet in extreme weather.

As negotiators met at the climate summit in 2013 in Warsaw, Super Typhoon Haiyan wiped away homes and farms and killed more than 6,000 people in Southeast Asia.

Loss and damage was acknowledged in the 2015 Paris accord, the agreement among nations to jointly work to limit global warming,but not before the United States included specific language ruling out the prospect of liability and compensation.

The United Nations commissioned reports. A glossary was written to define all the ways that countries were facing irreparable harms, like the loss of territory that requires people to pack up and move or the inundation of vast swaths of farmland that cannot be recovered.

A breakthrough came at the Madrid climate summit in 2019: an agreement to set up a technical assistance program. So far that consists of a website but no staff or funding. Yamide Dagnet, who follows climate negotiations at the World Resources Institute, called that “insufficient.”

A few months later, Mr. Huq’s country was pummeled by Cyclone Amphan. The country’s early warning system succeeded in getting millions of people out of harm’s way. But a year later, Mr. Huq said, researchers from the International Center for Climate Change & Development, where he is the director, found that thousands of people had migrated to Dhaka after the storm leveled their homes. “This is loss and damage to the livelihoods of the people,” he said.

The cyclone was intensified by warmer ocean temperatures, a telltale sign of the effects of climate change.

Children played in the remains of a school building destroyed by Cyclone Pam in Vanuatu in 2019, four years after the cyclone struck.Credit…Mario Tama/Getty Images

Estimates of the amount of money required to address loss and damage varies widely, from roughly $300 to $600 billion a year by 2030. At the moment, rich countries have failed to shore up the $100 billion they promised to deliver annually by 2020. That aid is designed to help countries adapt to climate change; it doesn’t include funds to address permanent damage.

This week, negotiators from developing countries working on language around loss and damage said their counterparts from wealthy nations had not yet agreed to include any specific mention of money.

China, for its part, has long endorsed the developing country demands for loss and damage. Except it could soon find itself having to pay for the damages of its own historic emissions, which are fast catching up to that of the biggest industrialized countries of the global north.

And so the battle now is over whether the final text will endorse the principle of a separate fund to address loss and damage.

There’s additional scrutiny on the United States, in part because of its outsized role as history’s biggest polluter, but also because of the stated commitments of the Biden administration to climate justice.

That led Rev. Lennox Yearwood, an American climate justice activist who was sitting at a table near Mr. Huq, to credit the Biden administration for putting “environmental justice at the center” of its climate policies, in the wake of the broader movement for racial justice in 2020 after the death of George Floyd and others. But that was hardly sufficient, Rev. Yearwood said.

Mr. Huq, for his part, is optimistic that the rich world will get dragged to the altar this year and commit to setting up a loss and damage fund, even without committing to any specific amount of money.

That, he said, would give developing countries a chance to put it at the center of the agenda at the 2022 summit, to be held in the Egyptian resort city of Sharm El Sheikh. “I’m hopeful,” he said. “What we need in Glasgow is to plant a seed that we can then water for the next 12 months and make it bloom in COP 27 in Egypt.”

Stocks Soar in India, Luring Investors at Home and Abroad

Project Veritas and the Line Between Journalism and Political Spying