Long before President Vladimir V. Putin unleashed his war on Ukraine, Mosharraf Khalid was already contending with an expensive, bewildering and unrelenting assortment of problems afflicting the global supply chain.

This past week, Mr. Khalid’s business was hit with another confounding variable when President Biden announced a ban on imports of Russian oil.

Mr. Biden’s oil ban is not expected to leave the United States short much crude. But less oil landing on world markets — the result of the American ban on Russian sales — spells higher energy prices everywhere. It also means higher prices for petroleum products like plastic, whose prices track oil. Even the recycled plastic chips that Mr. Khalid’s company depends on as the primary ingredient for its packaging containers will cost him more.

The travails of his factory in Riverside, a sprawling city tucked in the desert east of Los Angeles, signify the stakes for the global economy, as the United States, Europe, Britain and other major powers seek to weaken Russia in a bid to reverse its lethal assault on its sovereign neighbor. A collection of sanctions engineered to damage Russia’s economy will spread the pain around the world, most directly in the form of higher energy prices. That will intensify the strains on economic growth while heaping fresh trouble atop the Great Supply Chain Disruption set off by the pandemic’s impact on commerce, factory production and worldwide transport. 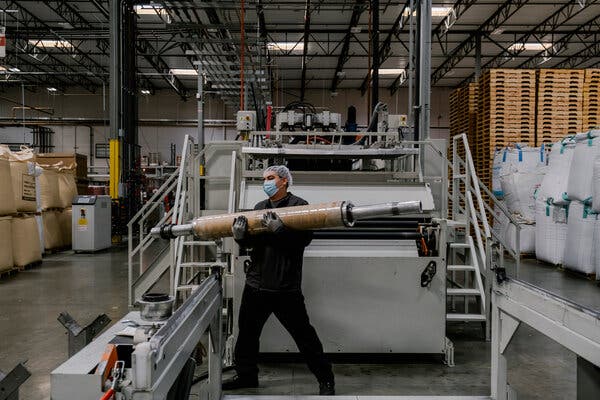 A worker unloading an empty roll of plastic. The price of plastic is likely to rise with higher oil costs.Credit…Mark Abramson for The New York Times

The soaring costs spurred by Russia’s war on Ukraine have added to the pain of supply chain issues for Royal Interpack.Credit…Mark Abramson for The New York Times

“Energy goes into so many other materials,” said Willy C. Shih, an international trade expert at Harvard Business School. “Everywhere you look, there’s going to be inflationary pressure.”

Natural gas — another big Russian export spiking in price — is a central element used to make a vast range of plastics. It is also a key ingredient for fertilizers, so the costs of producing grains like soybeans, corn and wheat will climb, Mr. Shih added. Meat raised on these grains will climb, too, along with bread.

The global economy is expected to expand by 3.4 percent this year, according to an estimate released by S & P Global Economics on Wednesday. That represented a slight downgrade from previous forecasts, reflecting the impact of higher energy prices on the most exposed regions of the world, like Europe, which relies heavily on Russian supplies

Before the pandemic, Mr. Khalid’s job as operations manager at Royal Interpack was a largely straightforward enterprise. Container ships delivered a steady stream of recycled plastic chips from Thailand to the Port of Long Beach. Trucks ferried them to his loading dock in Riverside.

Inside, 120 workers ran machines that melted the chips and rolled them into sheets of plastic, spooling them onto coils, like huge rolls of plastic wrap. Other devices pressed the sheets into plastic containers that hold strawberries, raspberries and other fresh fruit for giant retailers like Dole and Driscoll’s.

Production was predictable and even.

But early last year, the first significant crisis unfolded. Royal Interpack struggled to secure enough silicone, a synthetic element that it uses to prevent plastic sheets from sticking together.

To deal with a shortage of silicone, Mosharaff Khalid, Royal Interpack’s operations manager, bartered with another plant. In return, he shared extra cardboard tubes.Credit…Mark Abramson for The New York Times

Typically, ordering more silicone entailed waiting perhaps a week for the goods to arrive by truck from the company’s supplier in Atlanta. Suddenly, Mr. Khalid was waiting for three months. His supplier advised that it could not produce more because it was itself waiting for shipments of a key chemical.

Seeking help, Mr. Khalid reached out to another factory in Riverside that also makes plastic fruit packaging. The other plant had extra silicone and was willing to share. In return, Mr. Khalid relieved his neighboring plant of its own shortage: He shared extra cardboard tubes he uses as the core for rolls of plastic sheets. Barter staved off disaster for both operations.

Meanwhile, the price of wooden pallets was tripling. Royal Interpack stacks its materials and finished products on pallets, allowing forklifts to move them through its warehouse. Even at astronomical prices, pallets were hard to find.

By the middle of last year, the company was running low on plastic chips as its imports languished on incoming container vessels turned into floating warehouses off the port of Long Beach.

The journey from Thailand had typically taken a month to complete. Now it was taking two and three times as long.

Royal Interpack’s containers hold strawberries, raspberries and other fresh fruit for giant retailers like Dole and Driscoll’s.Credit…Mark Abramson for The New York Times

The factory needs six tractor-trailers of plastic chips a day to satisfy demand for its wares, but only four or five were coming in.

By October, more than 50 container vessels were marooned off the twin ports of Long Beach and Los Angeles, awaiting their turn to dock. Mr. Khalid’s plant was dangerously close to exhausting its supply of plastic. Alarmed, he cut production by one-fifth. He scrambled to identify domestic suppliers. He found one, but the upheaval in the market sent the price soaring by some 70 percent over the past year.

Determined to avoid further shortages, Mr. Khalid resolved to stockpile his most critically needed materials. That filled his warehouse to capacity — a new challenge to navigate.

Rising concerns. Russia’s invasion on Ukraine has had a ripple effect across the globe, adding to the stock market’s woes and spooking investors. The conflict has already caused​​ dizzying spikes in energy prices, and could severely affect various countries and industries.

The cost of energy. Oil prices already were the highest since 2014, and they have continued to rise since the invasion.  Russia is the third-largest producer of oil, so more price increases are inevitable.

Gas supplies. Europe gets nearly 40 percent of its natural gas from Russia, and it is likely to be walloped with higher heating bills. Natural gas reserves are running low, and European leaders worry that Moscow could cut flows in response to the region’s support of Ukraine.

Food prices. Russia is the world’s largest supplier of wheat; together, it and Ukraine account for nearly a quarter of total global exports. Countries like Egypt, which relies heavily on Russian wheat imports, are already looking for alternative suppliers.

Shortages of essential metals. The price of palladium, used in automotive exhaust systems and mobile phones, has been soaring amid fears that Russia, the world’s largest exporter of the metal, could be cut off from global markets. The price of nickel, another key Russian export, has also been rising.

Financial turmoil. Global banks are bracing for the effects of sanctions intended to restrict Russia’s access to foreign capital and limit its ability to process payments in dollars, euros and other currencies crucial for trade. Banks are also on alert for retaliatory cyberattacks by Russia.

Before the pandemic, his warehouse held a week’s supply of plastic chips, or about one million pounds. In recent months, he has kept two and three times that volume, piling giant sacks of plastic chips as high as the local fire code allows — 20 feet.

With prices for cardboard boxes rising, the plant has stockpiled those, too.

Managing more inventory in the confines of an already cramped warehouse is a constant logistical challenge that involves moving one thing out of the way to make room for another — a Rubik’s cube that is never fully solved.

The factory sometimes stashes materials outside in the parking lot, a measure afforded by the arid local climate. Mr. Khalid is considering parking storage trailers out on the pavement.

All of this extra activity has required more people. The plant has boosted its work force by one-third to 160, all the while fending off incursions from surrounding warehouses like Amazon’s, which has proffered signing bonuses to attract workers.

Mr. Khalid has responded by boosting hourly pay from $16 to $18 for those who meet targets like showing up on time and avoiding mishaps.

Late last year, one of the plant’s primary machines failed, requiring the purchase of a new part. It arrived by airfreight from Germany, landing in San Francisco only two days after Mr. Khalid placed the order. But another 20 days passed before the part completed its 430-mile journey to Riverside in the back of a truck.

These ceaseless brushes with volatility have injected uncertainty into every part of his operation.

Mr. Khalid used to approach ordering supplies the way households manage their stocks of milk or bread — no drama involved. Now, he obsessively calls his suppliers every few days while insisting on speaking to their top managers. He knows the names of their children, their vacation plans, their favorite sports teams.

This was the backdrop as Mr. Putin unleashed his military assault on Ukraine, generating a humanitarian catastrophe, reshaping geopolitical alignments and adding strain to an already crisis-wracked global supply chain.

Mr. Khalid has had to change the way he deals with his suppliers, developing more personal relationships to make sure his warehouse can run smoothly.Credit…Mark Abramson for The New York Times

When Mr. Khalid heard of Mr. Biden’s decision to ban Russian oil shipments, he grasped the imperative, but he also fretted over the consequences for his business.

His factory is protected for now by his abundant supply of plastic chips — enough to last through June. But after that, he will again be exposed to the turmoil in the supply chain.

“I don’t see it getting any better,” he said.

Are Big Businesses In or Out of Russia?

Officer Who Killed Ma’Khia Bryant Will Not Face Charges