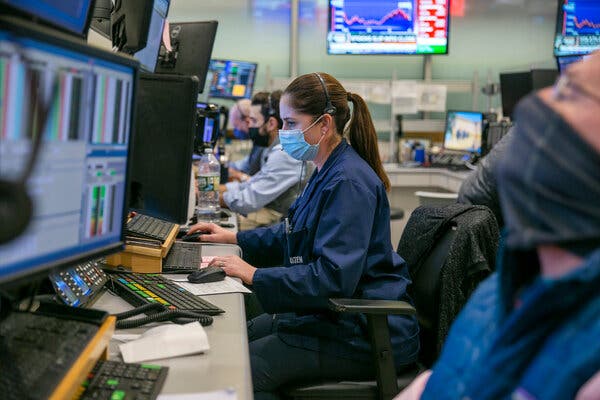 Stock markets took investors on another wild ride yesterday, plunging, recovering and then dropping again. Futures are looking up today, but what does that mean after a week of such swings in stocks?

The Fed’s latest policy announcement should provide some clarity, with uncertainty over what the central bank will say a key source of the recent volatility, according to market watchers. Economists do not expect Jay Powell, the Fed chairman, to raise interest rates at the end of the Fed’s two-day meeting this afternoon. But details about rate increases, which many expect to begin in March, will be closely watched, as will other hints about the bank’s efforts to unwind other pandemic stimulus programs.

The big question: How aggressively will the Fed act to fight inflation? Moving more forcefully risks denting economic growth, something stock investors appeared to be fretting about this week. Powell’s comments “will provide some much-needed clarity on where the Fed officials’ heads are,” said Anu Gaggar, a strategist for Commonwealth Financial Network.

The jitters in stocks haven’t been reflected in other major markets, and some strategists think that those markets might give a better signal of what’s next for the economy, given the remarkable run-up in stock prices during the pandemic. Here’s what’s been happening away from the ups and downs of stocks:

Microsoft beats profit expectations. The software maker reported record fourth-quarter earnings, though its shares briefly tumbled in postmarket trading before recovering, because the details disappointed some shareholders. Nevertheless, investors hope the report will presage rosy results from other tech giants.

The I.M.F. cuts growth estimates for China and the U.S. The institution warned that the world’s two biggest economies would suffer from higher inflation, pandemic shutdowns and supply chain problems. One such problem: The Commerce Department said that the U.S. faced an “alarming” shortage of computer chips.

Berkshire Hathaway’s annual meeting returns to Omaha. After two years of virtual events, Warren Buffett’s conglomerate plans to hold this year’s shareholder gathering, known as “Woodstock for Capitalists,” in person on April 30. The decision reflects evolving, and diverging, approaches to live events during the pandemic.

G.M. will invest $7 billion in electric-vehicle plants. The automaker will build a new battery factory in Michigan and overhaul a facility near Detroit to produce electric pickups. Toyota and Ford had already decided to spend billions on electric-vehicle factories in the U.S.

The I.M.F. urged El Salvador yesterday to end its recognition of Bitcoin as legal tender. Adopting a cryptocurrency in this way “entails large risks for financial and market integrity, financial stability and consumer protection,” the fund’s executive board wrote.

The price of Bitcoin has fallen by more than 50 percent from its peak in November, and the crypto market as a whole has lost more than $1 trillion in value over that time. For some prominent institutions that have bought into crypto, from El Salvador’s government to some multinational corporations, the downturn could prove costly — and may create regulatory headaches.

Will Bitcoin bounce again? A year ago, when the meme-stock frenzy was about to morph into a crypto boom, Bitcoin was worth just over $30,000. Since then, it has twice more than doubled in price and then given up the gains. Crypto evangelists like President Nayib Bukele of El Salvador, Elon Musk of Tesla and Michael Saylor of MicroStrategy seem undeterred.

El Salvador has spent about $85.5 million on Bitcoin since adopting the cryptocurrency as legal tender in September, including a $15 million purchase a few days ago, during the latest dip. The country has paid an average of about $47,500 per Bitcoin, and the current price is about $37,000, meaning that the Salvadoran investment has lost about 23 percent of its value. “Most people go in when the price is up, but the safest and most profitable moment to buy is when the price is down,” Bukele said on Twitter, where he announces Bitcoin purchases and rebukes critics of this investment strategy. “It’s not rocket science.”

MicroStrategy is also unmoved by the downturn. The business intelligence software company has spent about $3.75 billion on Bitcoin, an investment now worth about $4.5 billion. The company’s finance chief told The Wall Street Journal yesterday that it would keep on buying.

But holding crypto is an accounting hassle. In December, the S.E.C. told MicroStrategy to revise how it reports the value of its hefty Bitcoin holdings. MicroStrategy argued that the crypto should be treated like other assets, with gains and losses recognized immediately. The S.E.C. treats Bitcoin like intangibles, with losses reflected by impairments but gains recognized only upon a sale. (Tesla, which bought $1.5 billion in Bitcoin last year, reports quarterly results today and may face questions on the value of its holdings.) From an accounting perspective, then, holding on to crypto can only ever be a neutral or losing proposition.

In other crypto news, the market drop hit the price of an NFT sold by Melania Trump in an auction that ended today.

A Guide to Cryptocurrency

A glossary. Cryptocurrencies have gone from a curiosity to a viable investment, making them almost impossible to ignore. If you are struggling with the terminology, let us help:

Bitcoin. A Bitcoin is a digital token that can be sent electronically from one user to another, anywhere in the world. Bitcoin is also the name of the payment network on which this form of digital currency is stored and moved.

Blockchain. A blockchain is a database maintained communally, that reliably stores digital information. The original blockchain was the database on which all Bitcoin transactions were stored, but non-currency-based companies and governments are also trying to use blockchain technology to store their data.

Cryptocurrencies. Since Bitcoin was first conceived in 2008, thousands of other virtual currencies, known as cryptocurrencies, have been developed. Among them are Ether, Dogecoin and Tether.

Coinbase. The first major cryptocurrency company to list its shares on a U.S. stock exchange, Coinbase is a platform that allows people and companies to buy and sell various digital currencies, including Bitcoin, for a transaction fee.

Crypto finance. The development of cryptocurrencies spawned a parallel universe of alternative financial services, known as Decentralized Finance, or DeFi, allowing crypto businesses to move into traditional banking territory, including lending and borrowing.

NFTs. A “nonfungible token,” or NFT, is an asset verified using blockchain technology, in which a network of computers records transactions and gives buyers proof of authenticity and ownership. NFTs make digital artworks unique, and therefore sellable.

“That level of distribution is incredibly high. The fact they are pushing out that kind of award across the work force is rare.”

— Brian Kropp, the head of Gartner’s human resources practice, on the news that Bank of America plans to distribute $1 billion in stock among nearly all of its employees, first reported by CNN. The award is higher than the cash bonuses the bank usually pays out, especially for lower earners, reflecting the widening war for talent in the finance industry.

How businesses are preparing for a war in Ukraine

Tensions between Russia and Ukraine continue to escalate. Russia has mobilized about 100,000 troops near its border with Ukraine, and U.S. intelligence suggests that Ukraine’s military would not be able to stop a potential invasion.

A military flare-up would threaten to destabilize the already volatile region, with serious consequences for the security structure that has governed Europe since the collapse of the Soviet Union three decades ago. That would have major implications for businesses around the world.

Sanctions: In the event of an invasion, the U.S. and its allies have threatened to impose sanctions against Russia far beyond those implemented in 2014 after the annexation of Crimea. They would be directed at cutting off the largest Russian financial institutions that depend on global financial transfers, limiting technology exports in the aerospace and arms industries, and potentially banning the export of any consumer goods to Russia. A trade group representing Chevron, G.E. and other big American companies that do business in Russia recently asked the White House to consider giving U.S. companies “safe harbors or wind-down periods” as it considers imposing sanctions.

Energy supplies: Russia provides about a third of the gas and crude oil imported by the E.U. The Biden administration said yesterday it was working with energy suppliers from the Middle East, North Africa and Asia to bolster supplies to Europe in the coming weeks. The theory is that, once they are reassured about energy supplies, European allies will be more willing to go along with sanctions, if it comes to that.

Operations in Ukraine: A number of American and European companies have moved their software development to Ukraine, which exports more than $5 billion worth of I.T. services every year. If Russia invades, these companies may face major disruptions. Many global tech deals have a Ukrainian element, such as Hitachi of Japan buying GlobalLogic of the U.S. for $9.6 billion last year: GlobalLogic employs more than 5,700 people at offices across Ukraine.

Follow all of The Times’s coverage of Russia-Ukraine tensions here.

Tags
Bi̇tcoi̇n Market Stock That Will

E.P.A. Chief Vows to ‘Do Better’ to Protect Poor Communities From Environmental Harm

Labor Board Seeks Unionization at Starbucks Where Union Lost Election

What We Learned About TV During Its Biggest Week

A Weak Euro Heads to an Uncomfortable Milestone: Parity With the Dollar