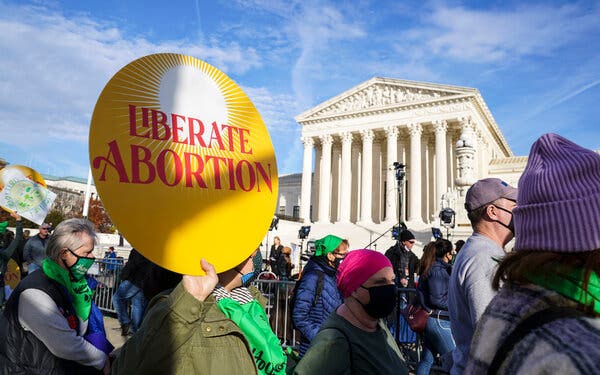 The Supreme Court held oral arguments yesterday in a case about a Mississippi law that bans abortions after 15 weeks of pregnancy. During the proceedings, the court’s six conservative justices signaled they are comfortable with the Mississippi law, although upholding it would be at odds with Roe v. Wade, the 1973 decision that established a constitutional right to abortion up to 23 weeks.

Mississippi has made the case that women have progressed enough economically since the 1970s to make abortion unnecessary. Before Roe v. Wade, “there was little support for women who wanted a full family life and a successful career,” Mississippi’s attorney general, Lynn Fitch, said in a statement summarizing a brief filed to the court. Now, parental leave, flexible work setups and other policies mean that “women have carved their own way to achieving a better balance for success in their professional and personal lives,” she wrote.

While some progress has been made, the idea that the benefits Mississippi describes are available to most women is still a stretch.

Should the court overturn Roe v. Wade — a decision is not expected until next summer — at least 20 states have laws or constitutional amendments already in place to ban abortion, according to the Guttmacher Institute, a research group that supports abortion rights. That could affect abortion access for 41 percent of women of childbearing age, with implications for the workplace as well.

Markets look up, for now, after another Covid-linked drop. U.S. futures were in the green this morning, after indexes fell for a second day amid fears that the economic recovery was going off track. Then again, U.S. stocks began yesterday up as well, before news that the Omicron coronavirus variant had been detected in California.

The Women’s Tennis Association calls off tournaments in China. The organization followed through on warnings that it would suspend play after its chief expressed concern about the safety of Peng Shuai, who had accused a top government official of sexual assault. But no other sports association, including the International Olympics Commission, which said it held a call with Peng yesterday, is following suit.

Capital One ends overdraft fees. The lender said it would stop charging customers for overdrawing their accounts, the latest to do so, shortly before the Consumer Financial Protection Bureau said it would closely examine banks that relied heavily on such charges for revenue.

Apple reportedly warns of slowing demand for iPhones. The tech giant told its suppliers that demand for its iPhone 13 had weakened, after it had already publicly cut sales forecasts for the device, Bloomberg reports. It cited supply chain issues that made the phones hard to find, discouraging consumers.

Major League Baseball stages a lockout. The league suffered its first work stoppage in three decades after players and owners failed to reach a new collective bargaining agreement. The two sides remain far apart, so it isn’t clear whether the lockout will run into the regular season.

The president of the European Commission, Ursula Von der Leyen, said yesterday that the political bloc should have a “discussion” about whether to require people across the E.U. to be inoculated against the coronavirus, as the Omicron variant spreads. Her remarks came after Germany’s incoming chancellor, Olaf Scholz, backed making vaccines mandatory in the country as soon as February.

OPEC and its oil-producing allies meet today at a potentially perilous time for the global economy, and also for the group. In August, the so-called OPEC Plus group agreed, given the economic recovery, that it would slowly increase the oil supply each month, until the end of 2022. But in the past few weeks, as oil prices have slid, Saudi Arabia and Russia have been pushing for a pause in supply increases.

Why would OPEC Plus want to sell less oil? Restricting supply can drive up prices, which after rising steadily for most of the year plunged 20 percent in the past month. That’s because of the Omicron variant, but also because the U.S. and other world powers, including China, coordinated a release of oil from national strategic reserves to drive down gasoline prices. OPEC Plus could cut production, or at least stall increases, to put a floor under prices and reassert its control over the market.

Why would OPEC stick with planned supply increases? This would ease tensions with the Biden administration and avoid further reserve releases. Ultimately, the biggest threats to oil-producing countries are new climate change goals that have many nations rushing to invest in alternatives to fossil fuels. High oil prices could accelerate those investments. “OPEC and the Saudis used to be able to manipulate the market with confidence in oil’s monopoly grip on transport,” Jim Krane of Rice University told The Times. “Now we’re seeing substitutes emerging at the margins. Confidence in oil’s longevity is slipping.”

Credit…A section of a handwritten note submitted as a trial exhibit in United States v. Elizabeth A. Holmes.

Elizabeth Holmes’s note to self

In an undated note she wrote on hotel stationery, Elizabeth Holmes comes across as an entrepreneur controlling all aspects of her schedule and interactions. (Detail from the note above — full document here.) The note serves as a fascinating exhibit in the fraud trial of the former leader of the failed blood-testing start-up Theranos.

But Holmes, who is testifying in her defense, said the rules — from “I am never a minute late” to “My hands are always in my pockets or gesturing” — came from her former boyfriend and business partner Sunny Balwani, who she said was abusive and controlling. Another exhibit, which Holmes said was written by Balwani, included three pages of management advice. “There are definite, repeatable, scientific patterns to success in business,” it said.

Regulators on the left and right rarely agree on policy. But when it comes to cryptocurrency, the current and former chiefs of the S.E.C. are remarkably aligned: The technology may be new, but old rules still apply.

Jay Clayton, who led the agency during the Trump administration, interviewed Gary Gensler, the current S.E.C. chair, yesterday at the Digital Asset Compliance and Market Integrity Summit in New York. Clayton now advises crypto companies, and Gensler taught crypto classes as a professor at M.I.T. before joining the agency.

Where is crypto regulation headed? Gensler and Clayton are on the same page. Gensler expressed a view that Clayton has long articulated — “I would quote you back to you,” the current S.E.C. chief told his predecessor — and which blockchain businesses strongly resist: That crypto tokens are “largely” used to raise money for entrepreneurs and, as such, meet “the time-tested definitions of an investment contract and are thus under the securities laws,” Gensler said.

This suggests that many, if not most, crypto issuers must register with the S.E.C. And there is a critical case pending that may resolve this question. At the end of Clayton’s tenure last year, the S.E.C. sued Ripple Labs and its founders, accusing them of raising over $1.3 billion through an unregistered securities offering when selling their tokens, known as XRP. Because Ripple sold XRP to raise money for its operations, investors were owed disclosures about the company’s business so they could make informed decisions about whether to buy the token, the agency said. (Not every cryptocurrency is a security: Bitcoin, for example, is considered a commodity in the U.S. because there is no centralized entity controlling it.)

For crypto enthusiasts, the regulators’ agreement was a source of frustration. In online comments during the event, many called for their incarceration — or worse. If it came as any consolation that both Gensler and Clayton also noted that crypto and its associated innovations had promise, the comments did not reflect it.

Tags
Crypto Had Oil Over Who

Britain Turns to Bankers to Blaze a Green Trail

A Pollster’s Warning to Democrats: ‘We Have a Problem’

Biden Administration, Settling a Long Fight, Plans to Block a Mine in Alaska

The commodities giant Glencore will pay $1.1 billion to settle bribery and price-fixing charges.