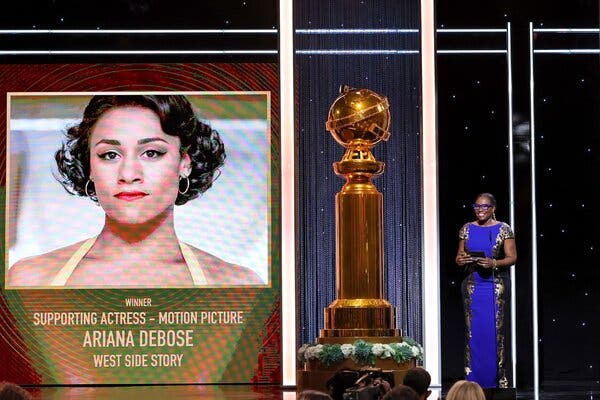 This year’s Golden Globes weren’t televised, depriving winners like “West Side Story” of publicity that could help ticket sales.Credit…Emma Mcintyre/Agence France-Presse, via Hfpa/Afp Via Getty Images

On television, the pandemic is already over. In reality, it continues to wreak havoc on the entertainment industry.

Last night’s Golden Globes, which traditionally kick off the award show season, were not televised because of ethical issues surrounding the group that gives out the awards. The spike in coronavirus cases is also threatening the rest of awards season, which is about more than just self-congratulation: It has the entire industry reconsidering its fate in a year that was supposed to mark a return of Hollywood’s glitz and glamour.

“Suddenly, 2022 is looking eerily similar to 2021,” The Times’s Nicole Sperling writes. “It is also seeing the movie business’s best form of advertisement undercut in a year when films desperately need it.” The Critics’ Choice Awards — scheduled to be aired last night in hopes of filling the void left by the Globes — were pushed back, as were the AFI awards. Film festivals have been canceled or will be held virtually with less fanfare. The Academy Awards remain scheduled for March 27, with nominations on Feb. 8, but there has been no indication what the event will be like.

A lack of award shows affects which movies are made. If the Hollywood hype machine loses steam, it could prove devastating to the box office, which has struggled with each spike in coronavirus cases. The latest Spider-Man movie was a big success, but other big-budget films, like “West Side Story,” flopped. Pixar said last week that its latest film, “Turning Red,” would skip theaters and will debut exclusively on Disney+ in March, free for subscribers.

Movies with medium-sized budgets are particularly vulnerable, given their reliance on word of mouth and awards to spread awareness. In response, studios are experimenting with slowing theatrical rollouts, accelerating home streaming and holding more virtual screenings to court award voters.

“The movie business is this gigantic rock, and we’re close to seeing that rock crumble,” said Stephen Galloway, the dean of Chapman University’s Dodge College of Film and Media Arts. According to a recent study, 49 percent of prepandemic moviegoers are no longer buying tickets. Eight percent say they will never return. And the industry’s troubles extend well beyond movies: The Grammy Awards have been postponed for the second year in a row, Broadway shows are being delayed or canceled and sports events are suffering disruptions and dropouts.

In other pandemic news:

New York City suffers its deadliest apartment building fire in decades. At least 19 people, including nine children, were killed in a Bronx high-rise on Sunday, reportedly after a space heater sparked the blaze. The building is owned by three investment firms, including one co-founded by a housing adviser to Mayor Eric Adams.

Novak Djokovic can stay in Australia, for now. A judge ordered the release of the Serbian tennis star, who had been detained after the Australian government canceled his visa over questions about his coronavirus vaccination exemption. But he isn’t necessarily guaranteed to appear at the Australian Open next week: The government said it could still cancel his visa.

Airlines continue to cancel thousands of flights. About 5,000 trips were called off over the weekend, prolonging a string of disrupted journeys that began before Christmas. At fault, again, was a combination of bad weather and Covid-related staff shortages.

New York allows online sports betting. Four websites began taking wagers from New Yorkers over the weekend, making the state the 18th in the U.S. to legalize internet gambling. Anticipation of the move lifted shares in DraftKings, which had fallen last year as skeptics like the short-seller Jim Chanos questioned whether it could ever be profitable.

Jamie Dimon’s son-in-law is entangled in a $21 million business dispute. Joey Romeo is one of several Apollo Global Management executives accused of stripping an oil executive of his stake in an energy company, The New York Post reports. Apollo disputes the claims.

Why Tesla is winning

Automakers recently announced their 2021 sales tallies, and the big winner was Tesla. The electric vehicle maker sold nearly 950,000 cars last year, up 87 percent from the year before. Detroit’s Big Three — Ford, G.M. and Stellantis, the parent of Chrysler — all saw sales fall last year, though they still sell far more cars than Tesla.

Tesla better anticipated last year’s rebound in demand and showed a superior command of its supply chain, The Times’s Jack Ewing reports. This shows that the industry’s biggest players may be even more vulnerable to Tesla, Rivian and other upstarts than industry experts seem to realize. Here are three reasons Tesla won 2021:

Will the good times last? Tesla aims to increase sales about 50 percent a year for the next several years, which could get trickier as it ramps up production and needs more chips and parts. Traditional carmakers are also upping their game in electric vehicles. “Tesla will continue to grow,” said Stephen Beck of cg42, a management consulting firm. “But they are facing more competition than they ever have, and the competition is getting stronger.”

“The tolerance for dealing with jerky bosses has decreased.”

— Angelina Darrisaw, C.E.O. of an executive coaching firm, on one of the many ways that the pandemic has changed work culture. Darrisaw said demand for her services rose last year: “You can’t just wake up and lead people.”

► Fed confirmation hearings: The Senate holds hearings for key posts at the central bank, with Jay Powell, who was nominated for a second term as chairman, answering questions on Tuesday and Lael Brainard, who was nominated as vice chairwoman, appearing on Thursday. Some progressive Democrats, like Senator Elizabeth Warren of Massachusetts, said they will oppose Powell’s renomination, but he and Brainard are expected to pass muster.

How the Supply Chain Crisis Unfolded

The pandemic sparked the problem. The highly intricate and interconnected global supply chain is in upheaval. Much of the crisis can be traced to the outbreak of Covid-19, which triggered an economic slowdown, mass layoffs and a halt to production. Here’s what happened next:

A reduction in shipping. With fewer goods being made and fewer people with paychecks to spend at the start of the pandemic, manufacturers and shipping companies assumed that demand would drop sharply. But that proved to be a mistake, as demand for some items would surge.

Demand for protective gear spiked. In early 2020, the entire planet suddenly needed surgical masks and gowns. Most of these goods were made in China. As Chinese factories ramped up production, cargo vessels began delivering gear around the globe.

Then, a shipping container shortage. Shipping containers piled up in many parts of the world after they were emptied. The result was a shortage of containers in the one country that needed them the most: China, where factories would begin pumping out goods in record volumes

Labor shortages. Businesses across the economy, meanwhile, struggled to hire workers, including the truck drivers needed to haul cargo to warehouses. Even as employers resorted to lifting wages, labor shortages persisted, worsening the scarcity of goods.

Component shortages. Shortages of one thing turned into shortages of others. A dearth of computer chips, for example, forced major automakers to slash production, while even delaying the manufacture of medical devices.

A lasting problem. Businesses and consumers reacted to shortages by ordering earlier and extra, especially ahead of the holidays, but that has placed more strain on the system. These issues are a key factor in rising inflation and are likely to last for months — if not longer.

► Prices and shopping: On Wednesday, the latest inflation data will reveal how much prices rose in December, after the previous month’s reading set a 40-year high. On Friday, retail sales numbers for December are set for release, and they will be scanned for any signs that inflation, supply issues and other pandemic disruptions have made shoppers more wary of opening their wallets.

On the steps of his office in New York, beside a sculpture by Pedro Reyes.Credit…Mark Sommerfeld for The New York Times

Ron Perelman is a rare American billionaire who didn’t get richer during the pandemic. The chairman and C.E.O. of the holding company MacAndrews & Forbes, who became an emblem of the “greed is good” era with his 1985 hostile takeover of Revlon, is divesting a wide range of personal assets to pay down huge business debts.

Perelman’s recent actions have raised speculation that he is sick or broke, both of which he denies, writes Jacob Bernstein in a must-read profile in The Times. Perelman, 79, has said he is simply shifting priorities and leading a less leveraged lifestyle.

Buying Revlon “was never a vanity play,” he says. But it was personal to the extent that many of the loans financing it and Perelman’s other businesses were backed by his assets. When the pandemic hit and Revlon’s share price collapsed, he began divesting to repay creditors: He has recently sold properties, tens of millions of dollars worth of art, and he placed his superyacht on the market for $106 million.

“We’re all complicated, we’re all crazy,” he notes. Perelman, an Orthodox Jew with a penchant for celebrity and high culture, who has been married five times and whose divorces have been known to go poorly, cultivated a myth of being self-made despite being born into privilege and marrying into fortunes that helped him grow his own. He controls Revlon and has held onto its cosmetics arm while selling off more profitable ventures. Hints at a sale have never gone anywhere, which some believe is a way for Perelman to buy time with bondholders.

“I want to be active until I’m 120,” he says. Revlon is a big part of his identity, associates point out. Retirement, Perelman told The Times, is “the beginning of the end.”

Tags
Tesla That Which Will Year

Biden Comes Out Swinging Against Republicans as His Agenda Stalls

Raiders Use 17th Game (and Then Some) to Slide Into Postseason

In Some Markets, Cooler Heads Are Prevailing

E.P.A. Chief Vows to ‘Do Better’ to Protect Poor Communities From Environmental Harm