WASHINGTON — Working in concert with five other countries, President Biden on Tuesday ordered the release of oil from the nation’s emergency stockpile as Americans face rising gas prices amid a jump in inflation ahead of the holiday season, according to senior administration officials.

The administration will tap into 50 million barrels of crude in the Strategic Petroleum Reserve. Britain, China, India, Japan and Korea will also open up their oil reserves in an effort to combat soaring global prices on oil.

The Department of Energy’s release of the reserves, which is set to be detailed in remarks by Mr. Biden on Tuesday afternoon, is meant to address fluctuations in supply and demand for oil, administration officials said.

The move by Mr. Biden is a shot across the bow of OPEC Plus, the name for the Organization of the Petroleum Exporting Countries along with Russia and other countries. Mr. Biden has pushed OPEC Plus to increase production, but has been rebuffed.

The decision to tap the U.S. stockpile of crude, the largest in the world with 620 million barrels, was a way for the president to show the administration’s focus on rising gas prices, which have stoked anxiety among Americans amid declining approval numbers for the administration.

But it remains unclear if it will have much impact on the price of oil. Traders had been expecting a larger release of as much as 100 million barrels, said Richard Bronze, head of geopolitics at Energy Aspects, a market research firm in London.

The price of oil has fallen since late October partly in anticipation that countries would take action to try to tame energy costs. The U.S. benchmark, West Texas Intermediate, immediately jumped after the administration’s announcement, and was trading 1.3 percent higher for the day. So far this month, the price had dropped 4.75 percent.

Demand for oil fell precipitously in the early months of the pandemic, so oil-producing nations cut output. In the United States, reduced demand led to a substantial decline in drilling; the country’s oil rig count was down nearly 70 percent in summer 2020.

The U.S. stockpile, stored in underground caverns in Texas and Louisiana, was established after the 1973-74 oil embargo by Arab members of the Organization of the Petroleum Exporting Countries, and has only been tapped in this manner in emergencies like the buildup to the Persian Gulf war in 1991 and the aftermath of Hurricane Katrina in 2005, when much of the Gulf of Mexico oil infrastructure was damaged. The reserve is also used to exchange or lend oil to refineries when accidents or storms block shipping channels.

Biden administration officials said the move announced on Tuesday would not be an emergency release. It will rather come in two parts: a loan of 32 million barrels over several months to refineries and the accelerated sale of 18 million barrels, which has already been congressionally authorized.

Britain will be voluntarily allowing companies to release their oil reserves. If every company takes advantage of the option, it would amount to the release of 1.5 million barrels of oil, a British government representative said.

A coordinated release would probably be considered a challenge by members of OPEC Plus, and could prompt a response next week when the group holds its next monthly meeting.

In recent monthly meetings, the group has stuck with plans to increase production by a relatively modest 400,000 barrels a day each month. Asked about a potential response from OPEC Plus, U.S. officials said on Tuesday that the administration had worked for weeks to rally other oil-producing countries to agree to tap into their stockpiles to ensure a parallel release, which was a preference of Mr. Biden’s.

At its last meeting, on Nov. 4, the group said it was committed to ensuring “a stable and balanced oil market,” and that bigger increases could exceed demand as economies struggled to emerge from the pandemic, as supply-chain disruptions cause slowdowns and surges in coronavirus cases fill hospitals in some regions.

On Monday, an official of the International Energy Forum, an organization based in Riyadh, said he expected that OPEC Plus would continue with its current plans to raise production each month by 400,000 barrels a day.

“However, certain unforeseen external factors such as a release of strategic reserves or new lockdowns in Europe may prompt a reassessment of market conditions,” Joseph McMonigle, secretary-general of the organization, said in a statement. 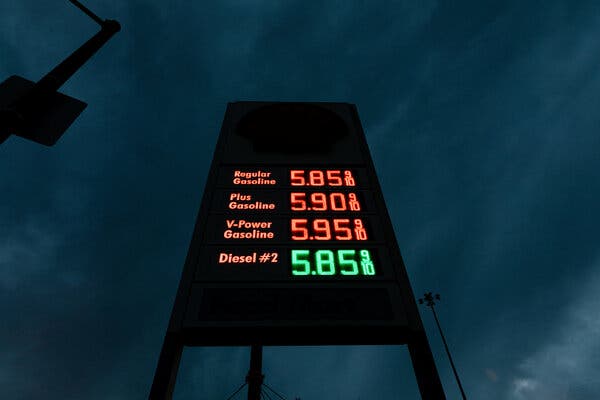 Rising gas prices have stoked anxiety among Americans amid declining approval numbers for the Biden administration.Credit…Jason Henry for The New York Times

Helima Croft, head of global commodities at RBC Capital Markets, an investment bank, agreed that OPEC Plus could choose to respond at its next meeting, on Dec. 2.

A steady rise. American consumers have seen the cost of gasoline, along with many other goods and services, surge sharply in recent weeks. Last month, gas prices hit their highest level since 2014, and the national average for a gallon of gas is now $3.41, according to AAA.

The role of crude oil production. Gas prices have gone up in part because of fluctuations in supply and demand. Demand for oil fell early in the pandemic, so oil-producing nations cut production. But over the past year, demand for oil recovered far faster than production was restored, driving prices up.

Additional factors at play. The price of crude oil is only one element driving up gas prices. Compliance with renewable-fuel standards can contribute to the cost, the price of ethanol has increased, and labor shortages in the trucking industry have made it more expensive to deliver gas.

A global energy crunch. Other types of fuels, including natural gas and coal, are also growing more expensive. Natural gas prices have shot up more than 150 percent in recent months, threatening to raise prices of food, chemicals, plastic goods and heat this winter.

The U.S. response. To combat soaring prices and their effects on inflation, President Biden ordered the release of oil from the nation’s emergency stockpile. He also asked the Federal Trade Commission to investigate possible “illegal conduct” by oil and gas companies.

“If OPEC wants to be obstructionist, they can blunt the impact” of the oil release, she said, by not approving the next monthly 400,000 barrels-a-day production increase at the meeting.

On the other hand, she added, doing that would “expose them to a lot of problems in Washington,” including, potentially, an antitrust bill in Congress aimed at OPEC, known as NOPEC, that could call for going after the financial reserves of countries like Saudi Arabia and the United Arab Emirates. “I think it would be a nuclear option and OPEC won’t want to go down that path,” she said.

Biden administration officials on Tuesday sought to frame the move as an indication of the president’s focus on the rising gas prices challenging Americans. The officials also pointed to Mr. Biden’s request to the Federal Trade Commission to investigate whether oil and gas companies were engaging in “illegal conduct” that was driving up prices at the pump.

The surge in inflation, as well as concerns about the persistent pandemic, haphazard withdrawal from Afghanistan and soaring crossings at the border have contributed to declining approval numbers during the politically troubling time for the administration.

Democrats in Congress have recently called for Mr. Biden to take action to provide immediate relief for Americans, including the Senate majority leader, Chuck Schumer, who said earlier his month that the administration should tap into the stockpile.

Robert McNally, president of Rapidan Energy Group, a market research firm and a former energy adviser in the George W. Bush White House, said the announcement “may be politically smart, but I don’t think it is smart in terms of policy and will likely backfire.”

“There are good odds that OPEC Plus will offset this and they have a bigger fire hose than we do,” he said. “Using strategic stocks to defend an oil price level set in a global market is pure folly.”

Most experts believe a release would lower prices modestly, but only for a short time because oil prices are set globally and world consumption averages roughly 100 million barrels a day. The average price for a gallon of regular gasoline in the United States had risen to $3.40 on Tuesday from $2.11 a year ago, according to AAA, the travel services organization. But gas prices have started to level off in the past week.

The most recent coordinated release of oil reserves came in June 2011, when the United States and 27 other nations released 60 million barrels of reserves to replace lost production from Libya that was halted by political turmoil in the North African country. Of the total amount of oil released, about half came from reserves in the United States, with the rest from the other 27 industrialized nations that belonged to the International Energy Agency. Negotiations for the coordinated response were held in secret for weeks, American officials said.