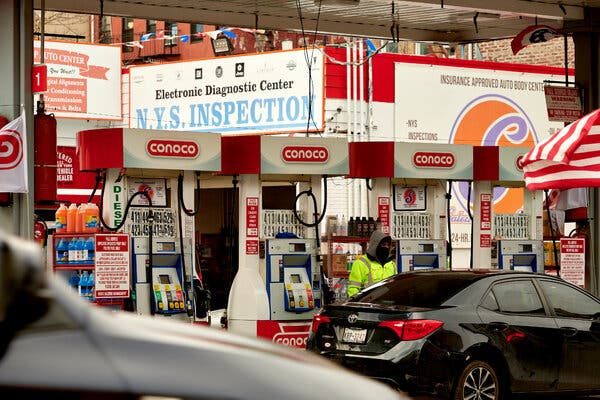 Consumers are bracing for higher prices for gas and other goods.Credit…Gabby Jones for The New York Times

A rate increase… and then what?

The Federal Reserve is meeting this week. The economy is running hot, and the Fed is trying to slow it down before widespread price pressures become even more of a problem. It lifted interest rates in March for the first time since 2018, by a quarter of a percentage point, and has set the stage for an even larger increase of half a percentage point this week. The announcement is expected to come at the conclusion of the Fed’s two-day policy meeting on Wednesday afternoon.

But while the rate decision is unlikely to be a surprise, economists and investors will want to know how the Fed plans to move forward at a time when inflation is rising faster than it has in decades. The recent performance of the stock market, which in April took its biggest monthly dive in two years, is hinting at economic trouble ahead, and is the latest complication in the Fed’s fight against inflation.

The outlook for inflation is wildly uncertain, report The Times’s Jeanna Smialek and Ben Casselman. On one hand, the Fed’s small rate increase has already pushed mortgage rates sharply higher, which may start to weigh on the housing market and cool off related types of demand. Nonetheless, costs for raw materials and other key inputs continue to climb, and may keep doing so amid the war in Ukraine and lockdowns in China. Already, some companies, like the washing-machine maker Whirlpool, are seeing consumer demand wane compared with last year, though it is still higher than before the pandemic. “Historic levels of inflation, notably in raw materials, energy and logistics, will impact us throughout the year,” James W. Peters, Whirlpool’s chief financial officer, said last week in a conference call.

Americans have been feeling the pain of higher prices, even if they are spending through it. A record share of people in a Gallup poll named inflation as the top U.S. economic problem, survey data released last week showed. Officials spent much of 2021 hoping that pandemic-era cost increases would fade as supply chains returned to normal. Instead, inflation has remained too high for the Fed’s comfort for a year, and it has become broader with time. A higher-than-expected jump in wage data released Friday made a second big increase in June more likely “at the margin,” wrote Ian Shepherdson, chief economist at Pantheon Macroeconomics.

At the same time, the stock market has had a bad year. The Fed has long said it doesn’t make decisions based on the market, but clearly the recent stock rout makes raising interest rates harder. The S&P 500 fell 8.8 percent in April, and is down more than 13 percent in 2022. The drop shows many investors are coming to the same conclusion: The economy is about to take a hit, and everywhere they look, they see trouble ahead, reports The Times’s Coral Murphy Marcos. “There are definitely a lot of open-ended and unquantified risks looming,” said Victoria Greene, chief investment officer at G Squared Private Wealth, an advisory firm.

House Speaker Nancy Pelosi visits Poland. Pelosi met with President Andrzej Duda today. Her visit to Kyiv over the weekend made her the most senior American official to go to Ukraine since Russia invaded. Separately, a British intelligence agency said that more than a quarter of the ground forces that Russia committed to the war were now most likely “combat ineffective.”

Understand Inflation in the U.S.

The E.U. will propose phasing out Russian oil by the end of the year. Restrictions on imports would be introduced gradually under the proposed plan. A decision about new sanctions could come as soon as this week.

Nearly a third of the S&P 500 will report earnings this week. Investors will look to Pfizer, CVS and Starbucks for signs of supply chain disruption and how consumers are responding to price increases.

Beijing escalates Covid restrictions. The sweeping new rules stopped short of a full lockdown, reflecting the government’s concerns about the economy and unrest over lockdowns in other cities. In the U.S., a Covid spike has led to fewer hospital admissions than in earlier waves.

Amazon gets a hearing that could overturn a union vote in New York. Amazon says the conduct of the National Labor Relations Board’s Brooklyn office violated rules and alleges that union organizers intimidated workers. Meanwhile, the N.L.R.B. will start counting ballots today from workers at a second Staten Island warehouse.

Berkshire’s big weekend is back

Berkshire Hathaway, the investing conglomerate run by the billionaire and investment legend Warren Buffett, held its annual meeting in person over the weekend after a two-year pandemic hiatus. Andrew was on hand at the event, which drew thousands of people to Berkshire’s hometown, Omaha, and has this dispatch.

Warren Buffett, 91, and his longtime business partner Charlie Munger, 98, lobbed quips and retorts over the course of more than six hours onstage at what some call “Woodstock for Capitalists,” speaking and fielding questions. In the audience were Tim Cook, Jamie Dimon, Bill Gates, Bill Ackman, Mario Gabelli, Bill Murray and Glenn Close. Ken Chenault was there as a first-time board member.

The big difference this year was the presence of Ajit Jain and Greg Abel, Buffett’s successors, who sat on the dais with him and Munger for the first time. Jain was particularly Buffett-like in the straightforward and analytical way he answered questions, at one point admitting that Geico, the car insurer owned by Berkshire, had underperformed its rival Progressive, and explaining why.

The biggest news was likely that Buffett was arbitraging the Activision deal with Microsoft, betting it will happen, and had significantly increased his bet on the oil industry by buying more shares of the energy giant Chevron in the first quarter.

Here are some of the meeting’s best lines:

What is inflation? Inflation is a loss of purchasing power over time, meaning your dollar will not go as far tomorrow as it did today. It is typically expressed as the annual change in prices for everyday goods and services such as food, furniture, apparel, transportation and toys.

What causes inflation? It can be the result of rising consumer demand. But inflation can also rise and fall based on developments that have little to do with economic conditions, such as limited oil production and supply chain problems.

Where is inflation headed? Officials say they do not yet see evidence that rapid inflation is turning into a permanent feature of the economic landscape, even as prices rise very quickly. There are plenty of reasons to believe that the inflationary burst will fade, but some concerning signs suggest it may last.

Is inflation bad? It depends on the circumstances. Fast price increases spell trouble, but moderate price gains can lead to higher wages and job growth.

How does inflation affect the poor? Inflation can be especially hard to shoulder for poor households because they spend a bigger chunk of their budgets on necessities like food, housing and gas.

“In December, Wood described ARKK portfolio as in ‘deep value’ territory and sent value investors worldwide into spasms of indignation. ARKK’s down another 50% since then, so deeper value-er, I guess.”

Musk tears up the financing playbook

Elon Musk’s financing plan for his buyout of Twitter has broken all the rules. He is putting up far more of his own money than is usual in such a deal; private equity buyers typically use very little of their own cash to pay for an acquisition. Borrowing money is more standard, but Musk is borrowing a lot — $13 billion in loans would end up on Twitter’s books.

The deal may burden Twitter with more debt than it can handle, given its patchy profitability, The Times’s Anupreeta Das and DealBook’s Lauren Hirsch report in a close look at the numbers. And Musk’s push for more “free speech” on Twitter could hurt advertising income, making it harder for the company to pay off its new debt.

It is not too late for Musk to partner with other investors to reduce the amount of his own money in the deal, and this is something he is considering, according to two people with knowledge of the discussions. Thoma Bravo, a technology-focused buyout firm, is open to providing some financing. Apollo, an alternative asset manager, also looked at a possible deal where it would extend a loan on preferred terms.

The stakes are high for both Twitter and Tesla. Because Musk is selling Tesla shares as well as putting them up as collateral for personal loans to raise cash, Tesla’s value would be linked to Twitter’s. This is risky because any difficulties at Twitter could force Musk to sell Tesla stock and put the money into Twitter. If Tesla’s stock falls far enough, it would trigger clauses in Musk’s personal loans requiring him to add more collateral.

Will Musk’s unusual approach secure the social media network’s future, or will it end up squandering a big chunk of his fortune? That’s the question on many people’s minds, as details of the deal, which is expected to take three to six months to close, are hammered out.

Tags
Off That Ti̇me Will Year