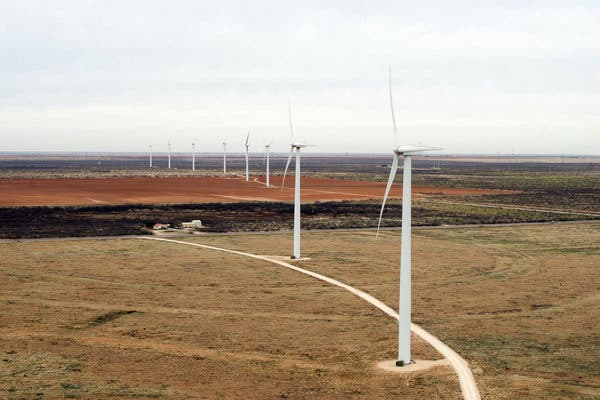 Wind turbines in Texas.Credit…Brandon Thibodeaux for The New York Times

E.S.G. has its enemies

While speaking about energy policy in Texas yesterday, former Vice President Mike Pence, a potential 2024 Republican presidential contender, said he wanted to “rein in” E.S.G., or investing based on environmental, social and governance principles. He is not alone.

Some notable names are pushing back as businesses get increasingly tangled up in cultural and political fights, and as the federal government builds E.S.G. principles into regulations. A new financial firm, Strive, started by Vivek Ramaswamy, the author of “Woke, Inc.,” and backed by the billionaire investors Peter Thiel and Bill Ackman, has a similar mission: It will urge companies not to get involved in social, political or environmental issues.

Notably, even BlackRock, an outspoken leader in sustainable investing, is stepping back, saying in a memo yesterday that it is supporting fewer shareholder proposals on climate disclosures this proxy season than last because many are too “constraining” and “prescriptive.”

The S.E.C. is feeling the pressure. This week, the agency extended the public comment period on proposed new climate disclosure rules without explanation. The move came days after Republicans on the House Financial Services Committee demanded a hearing with the commissioners, accusing the S.E.C. of overreach and of relying on “short and overlapping comment periods” to push “a scorched earth rule-making agenda.” Supporters of the climate proposal want action. The agency’s chairman argues that many companies have long measured their exposure to climate risks, only with no overarching regime to make the metrics meaningful.

Societally there is little alignment on values. Jeffrey Younger of the N.Y.U. Stern School of Business said the fights are the same in business schools across the country, with some professors backing the Milton Friedman-esque model focused on profits, and others pushing a broader stakeholder capitalism approach. But there is a profit motive to E.S.G., Younger told DealBook. If shoppers and investors are looking for environmentally positive offerings, then it makes sense for businesses to respond.

The pushback will probably gain steam as midterm elections approach. At the S.E.C., in Congress and beyond, many Republicans resist climate policies while many Democrats support them. This aligns with voter views. According to a Pew Research poll last year, only about 10 percent of people on the right called climate change a top concern, compared with about 49 percent on the left.

A report is likely to show that the pace of inflation slowed a bit in April. The government is set to report its latest inflation figures this morning. Lower gas prices and a technical quirk are expected to result in a rate of increase that is slightly slower, but still among the highest levels of inflation in the past four decades.

A big pullback is hitting tech start-ups. In the first three months of the year, U.S. venture funding fell 8 percent from a year earlier. People are dumping start-up stock, and at least 55 tech companies have announced layoffs or shut down this year, compared with 25 at this time last year, according to Layoffs.fyi.

The Senate confirms Lisa Cook as a Fed governor. Cook is the first Black woman to hold that post. The vote resulted in a 50-to-50 split that the vice president broke.

Understand Inflation and How It Impacts You

Netflix may introduce a lower-priced, ad-supported tier by the end of the year. In a note to employees, Netflix executives also said the company would be cracking down on password sharing around the same time.

J.P. Morgan says its description of Chinese tech companies as “uninvestable” was an error. The reference in research reports, which the firm reportedly meant to remove, prompted one Chinese company to downgrade J.P. Morgan’s underwriting role on an upcoming I.P.O.

The return of @realDonaldTrump?

Elon Musk said yesterday that if he owned Twitter, he would “reverse the permanent ban” of former President Donald Trump. As with most things related to Musk-plus-Twitter, DealBook has questions:

What would a Trump return mean? He would have access to a huge megaphone ahead of the midterm and presidential elections. Several groups reacted with alarm. “Do not allow 45 to return to the platform,” said Derrick Johnson, the president of the N.A.A.C.P. “Do not allow Twitter to become a petri dish for hate speech or falsehoods that subvert our democracy.”

Would Trump come back? Musk argued that the ban “did not ultimately result in Donald Trump not having a voice.” Trump has said he won’t return — and plans to stay on his own social media platform, Truth Social. But that company is flailing so far — and online conversation around Trump has plunged.

Do investors care? Musk’s announcement underlines the political risk of a deal that scared plenty of traditional private equity firms away. Morgan Stanley, which is advising Musk and is one of several banks lending him a total of $13 billion, declined to comment, as did Ron Baron, whose BAMCO fund is putting in $100 million in equity. Brookfield, Sequoia, Andreessen Horowitz and Fidelity, all of which are offering up equity for the deal, did not respond to requests for comment.

Is this deal going to happen? Twitter’s shares closed yesterday at $47.26, well below the $54.20 that Musk agreed to pay for them. Musk is still securing financing for his takeover — and tech stocks are facing a blood bath. When discussing Trump’s account yesterday, Musk said: “This is not a thing that will definitely happen because what if I don’t own Twitter.” Is Musk backing away? Or heeding cautious advice from his lawyers at Skadden?

“Some industries are very good at ramping up and ramping down. You flip a switch and they can produce 10 times as much. Baby formula is not that type of a product.”

— Rudi Leuschner, an associate professor of supply-chain management at Rutgers, on a baby formula shortage that has left parents desperate.

The Bank of England in London.Credit…Tom Jamieson for The New York Times

Bank of England tries to make amends for slavery ties

In the heart of the City of London, the names of 599 enslaved men, women and children are on display in the Bank of England rotunda as part of the “Slavery and the Bank” exhibition.

What is inflation? Inflation is a loss of purchasing power over time, meaning your dollar will not go as far tomorrow as it did today. It is typically expressed as the annual change in prices for everyday goods and services such as food, furniture, apparel, transportation and toys.

What causes inflation? It can be the result of rising consumer demand. But inflation can also rise and fall based on developments that have little to do with economic conditions, such as limited oil production and supply chain problems.

Is inflation bad? It depends on the circumstances. Fast price increases spell trouble, but moderate price gains can lead to higher wages and job growth.

How does inflation affect the poor? Inflation can be especially hard to shoulder for poor households because they spend a bigger chunk of their budgets on necessities like food, housing and gas.

The bank apologized for its “inexcusable connections” to the trans-Atlantic slave trade in 2020after the killing of George Floyd and the subsequent protests that summer. Last year, the bank commissioned historians “to explore its historic links to trans-Atlantic slavery,” a bank spokeswoman told DealBook. They discovered that through a defaulted loan in the 1770s, the bank had acquired two plantations in the Caribbean nation of Grenada, where nearly 600 enslaved African people — those named in the exhibition — were forced to live and work. The exhibit also explores the unsavory history of some of the bank’s former governors, the city’s involvement in the slave trade and the financial effect of abolition.

The Bank of England and Lloyd’s of London are among the prominent city institutions that are trying to make amends, said Nick Draper, the former director of the Center for the Study of the Legacies of British Slavery at University College London and a former J.P. Morgan executive. “If you go back 10 or 15 years, city institutions, the city and maybe Britain as a whole were effectively in denial of or willing to deny any substantive engagement in slavery,” he said.

“The U.S. is further down the track” than Britain on discussions of reparations, Draper said, noting that while slavery was “embedded right in the heart of American society,” Britons were insulated from the ugly realities of the slave trade by distance. Still, the country “would not have industrialized in the same way and at the same pace without slavery,” he added, and though the conversation is in its nascence, “in the end, the reparations movement will become politically significant in Britain.”

The health care industry is known for being secretive about pricing, with huge ranges in what insurers pay. Although the federal government last year ordered hospitals to publicly disclose the cost of their services, many haven’t.

“It’s been a pretty open secret in the country that you just don’t know the price of health care in advance,” Chris Severn, the chief executive of the health care pricing platform Turquoise Health, told DealBook. “And there is a sneaking suspicion that the prices are just way too high.”

Severn’s company has raised $20 million in a Series A funding led by Andreessen Horowitz, it will announce today, with participation from Bessemer, BoxGroup and Tiger Global. Turquoise says it aims to make “transparent pricing ubiquitous for all health care stakeholders,” including payers, providers and patients.

There is no standardized format for hospitals reporting price data. Turquoise, which was founded in 2020, can be used as a starting point to compare relative costs of health care.

Tags
Back Ban Sai̇d That Will

In an Uphill Year, Democrats of All Stripes Worry About Electability