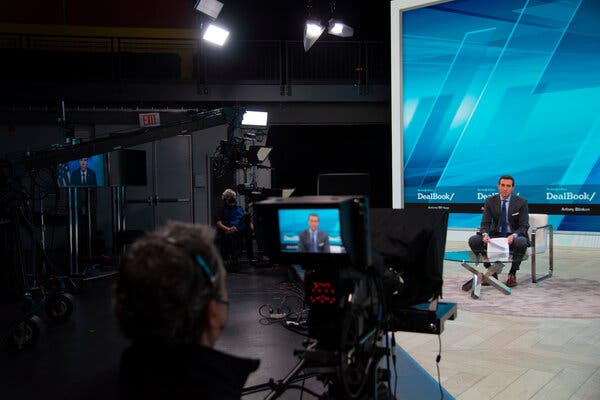 Andrew’s reflections as host of this week’s DealBook summit, the 10th edition of the event as we celebrate DealBook’s 20th anniversary:

After two days of interviews with some of the world’s top newsmakers, these are the moments that stood out to me.

Tim Cook’s comments about his personal investment in cryptocurrency went viral, but what he said about how Apple engages with China was more instructive. We often write about the role of business in speaking out on policy issues. When do they take a public stand, versus when do they engage privately? It’s hard to do both, and Cook made the case for engagement. Critics will say he has no choice, given Apple’s extensive operations in the country. But I don’t doubt the sincerity of his belief in “world peace through world trade,” he said, quoting IBM’s Tom Watson.

A day later, I asked Antony Blinken, the secretary of state, about how he thought companies should engage (or not) with China. “There are, I think, good-faith arguments in various directions,” America’s top diplomat said. I also pressed him on what the U.S. would do if China invaded Taiwan. The U.S. and other countries would “take action” to help Taiwan defend itself, he said. The big question is: What kind of action?

Hearing Adam Neumann speak publicly for the first time in two years was quite something. Was he humbled? Sitting next to him, it seemed like he was, perhaps more than what came across onscreen. Of course, some will think that the former WeWork chief can never be contrite enough — and I think he understands that. To me, the most telling moment was when I asked him whether he planned to watch the TV series being produced about the company’s rise and fall. He said that Jared Leto, the actor playing him, “told me not to.” I sensed some sadness in the answer. Neumann may have more than $1 billion, but the cliché is true: Money doesn’t buy happiness.

Meghan Markle and Mellody Hobson dropped some truths that often go unsaid. “The No. 1 beneficiary of diversity initiatives in this country has been white women,” Hobson said. On paid family leave, Markle said that “it takes strong men, modern men, to really understand they benefit from it as well.” And there was a “They’re Just Like Us” moment with the Duchess of Sussex: “I clipped coupons growing up,” she said. “I will never buy anything online without finding a promo code first.”

Matthew McConaughey may or may not run for governor of Texas. And his comments about waiting to vaccinate his youngest kids made headlines. But I was struck by his Zen-like confidence, which he explained with an impassioned riff on the difference between joy and happiness. Joy, in his telling, should be the goal. Watch this to see what he means.

I hope that next year many of you will be able to join us in person again, so we can experience this all together. But a hybrid approach that allows readers from across the globe to also join us virtually seems like the way forward.

Inflation is surging. Consumer prices in October rose 6.2 percent year-over-year, the fastest pace in three decades. That has spooked business leaders and lawmakers, and may put more pressure on the Fed to react.

China and the U.S. strike an unexpected climate pact. The world’s two biggest polluters said they would work together to reduce carbon emissions this decade, despite continuing trade tensions, although the announcement lacked many details.

Evergrande averts default, again. The embattled Chinese property developer made $150 million in interest payments yesterday, just before crucial deadlines. Missing those would have prompted a default that could ripple through the Chinese economy, though other developers, like Kaisa, remain on the edge of insolvency.

Rivian enjoys the biggest U.S. stock debut in years. The electric vehicle maker’s shares jumped 29 percent in their first day of trading, which valued Rivian at $86 billion — on par with G.M. It’s a sign that investors are betting Rivian can become the next Tesla.

Elon Musk sells $5 billion worth of Tesla stock. In regulatory filings, the Tesla chief said he sold about 4.5 million shares, “solely” to cover taxes tied to stock options he has received. He still owns about 17 percent of Tesla, a stake worth about $180 billion.

More from the summit

You can catch up on everything from the second and final day of the summit in our briefing from the day. Here are some of the highlights:

If China wants something from companies, “the state will get it …”

Secretary of State Antony Blinken warned business leaders against sharing information and technology with their Chinese-owned partners. If Beijing wants intellectual property or information — anything, really, he said — “the state will get it.”

He also called on governments, drug companies and others to “step up” vaccine distribution efforts around the world.

Ken Griffin of the financial giant Citadel said rapidly growing inflation was one of his biggest worries. He said that the Fed had been “far too generous” with stimulus, and he dismissed predictions that rising inflation would be temporary. “The theory that this is transitory is starting to get long in the tooth,” he said.

Griffin also expressed skepticism about the promises made by supporters of cryptocurrency. “I worry that some of this passion has been misplaced when it comes to cryptocurrencies,” he said.

“General Motors is so undervalued …”

Mary Barra, G.M.’s chief, said that she wasn’t bothered by Tesla being worth 10 times more than her company, despite selling far fewer cars. Why? Because G.M.’s investments in electric vehicles would eventually bear fruit, she said: “General Motors is so undervalued as we start this wonderful period we’re in.”

Barra said she currently drives a Chevy Volt, but that she was on the waiting list for an electrified version of something bigger. “I’m waiting for my Hummer,” she said.

“What’s needed today and what we want for tomorrow …”

Darren Woods, Exxon Mobil’s chief, argued that his oil giant — long criticized for its role in climate change — can help the global economy transition to clean energy. Exxon can “bridge that gap between what’s needed today and what we want for tomorrow,” he said.

A debate has emerged over whether rising energy prices are driven by moving too quickly away from fossil fuels or a cyclical phenomenon. Woods said both factors were at play.

Dax Shepard, a host of the popular interview-based podcast “Armchair Expert,” said that he was against deplatforming, welcoming conversations with all, including those he disagreed with. “I think people’s bad ideas are best heard because that’s when you find out how bad their ideas are,” the actor and comedian said. But Monica Padman, his co-host, still has her guard up during tricky interviews. “We’re having very human conversations, and everyone can come off sympathetic,” she said.

“Our dystopia is coming for you …”

The journalist Maria Ressa, who won a Nobel Peace Prize this year for her work in the Philippines, has put her life and liberty at risk exposing government corruption. Her experience is a sign of what may lie ahead for the U.S. and other countries. “Our dystopia is coming for you,” she said.

Ressa, who runs the digital media company Rappler, says the dangers she faces have been exacerbated by Facebook, which she says amplifies division and misinformation. The solution isn’t breaking up that company — others use similar algorithms — but stricter regulation.

The legal challenges to the Biden administration’s corporate vaccine mandate are piling up, giving businesses that oppose the rule an opportunity to delay — if not overturn — the rules.

Several trade groups have sued to stop the mandate, including the American Trucking Associations, the National Retail Federation and National Federation of Independent Business. Although a federal appeals court has issued a temporary stay on the mandate, bringing a lawsuit gives these groups a way to formally elaborate their case.

Just as noteworthy are the industry groups that aren’t joining these challenges, like the National Association of Manufacturers, the U.S. Chamber of Commerce and the Retail Industry Leaders Association. Let’s examine the different paths that two big retail groups are taking:

What might explain the split? While both groups count large companies as members, the Retail Industry Leaders Association does not represent any smaller companies, which are among the most concerned about the burden of carrying out the mandate. There’s also the risk of angering the White House, which may factor differently into groups’ stances.

China and U.S., at Odds on Many Issues, Agree on a Surprise Climate Deal

With Omicron’s Arrival, Stocks Will Again Hang on Headlines