In 1960, the American-born oil tycoon J. Paul Getty purchased his dream vacation home in Italy. He could have opted for a palazzo in a bustling resort destination like Portofino or Capri but, perhaps unsurprisingly, given his obsession with ancient Rome — his collection of artifacts from the era included rare bronze statues and priceless friezes — Getty, who died in 1976, ended up in Ladispoli, a quiet seaside town just 30 miles outside of the Italian capital. That’s not to say his home there — a vast villa constructed in 1640 for guests of the noble Orsini clan, who lived in the 13th-century castle next door — lacked for grandeur. Indeed, at various points stretching back to the Roman Empire and up until World War II, when it was bombed heavily, this stretch of Tyrrhenian coastline, known for its tranquil beaches and temperate weather, was a premier destination for Rome’s elite. During the extensive renovations that Getty oversaw, builders unearthed the ruins of a second-century Roman villa, pieces of which are now displayed in the home’s basement-turned-antiquities gallery, though really the entire property is filled with museum-quality works.

“He would have trains arriving from all over Europe with antiques,” said Marie-Louise Sciò, the C.E.O. and creative director of the Pellicano Hotels Group, whose family purchased the property in 1980. “It is still one of the largest private collections of Renaissance pieces and we’ve kept it almost exactly as he had left it.” In the entrance hall, there’s an 18th-century marble bust of the Roman consul MeneniusAgrippa, while in the Getty Studio, a sitting room, an intricate Aubusson tapestry depicting a woodland scene hangs on the wall, opposite a 17th-century wooden sacristy cabinet. Sciò and her three siblings lived with their parents in the house for almost a decade before 1990, when her father transformed it into a 19-room hotel called La Posta Vecchia. By the time of the sale, the elder Sciò had been in possession of another Italian jewel, Hotel Il Pellicano — about 75 miles up the coast in Porto Ercole — for just over a decade. Once an essential summer stop-off for la dolce vita-era celebrities like Sophia Loren, as well as Jackie Kennedy and Charlie Chaplin, the hotel was further immortalized by the photographer Slim Aarons’s 1980s series showing socialites lazing by its pool and shallows. 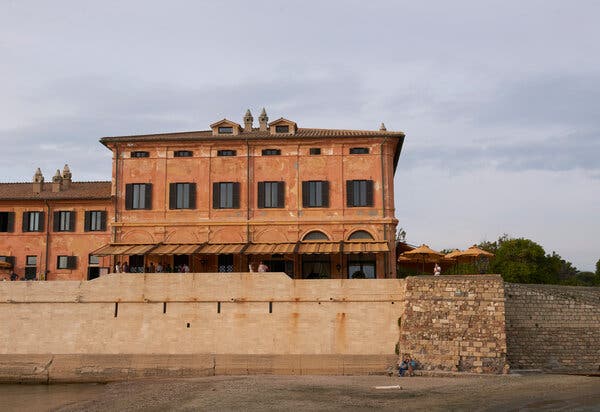 The villa that houses the hotel was first built in the 1600s, and underwent extensive renovations in the 1960s after it was purchased by the oil tycoon J. Paul Getty.Credit…Danilo Scarpati

Unsurprisingly, Il Pellicano was also a place for parties. “There was always a good excuse,” said Sciò. “If there was an eclipse that you could only see in Mexico, my mother would throw a party.” La Posta Vecchia, too, has seen its fair share of memorable nights, but Sciò mostly recalls playing hide-and-seek during them with the other children on the grounds, an expanse of manicured green lawns, towering palm trees and perfectly trimmed hedgerows that felt, she said, “so big one could get lost and disappear for a year.” These days, Sciò plays host at both properties (and at Mezzatorre, the family’s third hotel, on the north end of Ischia) and is equally capable of finding reasons to gather. Recently, a last-minute cancellation meant that, for an entire weekend in early October, La Posta Vecchia was free. And so Sciò, bolstered by newly loosened travel restrictions, decided to host an impromptu soiree for her far-flung circle. “We planned the entire thing in three weeks,” she said.

Having decided to keep the theme straightforward, she invited her 90-odd guests — among them the fashion designer Haider Ackermann, the decorator Luke Edward Hall, the knitwear designer Nimi Ponnudurai, the editor Robert Rabensteiner and the stylist Jerry Stafford — via a card illustrated with a rendering of an old oil painting of La Posta Vecchia and, atop it in neon yellow, the words “Let’s Dance.” The idea was to throw a festive Saturday lunch in the hotel’s garden, complete with custom pillows for sprawling out in the sunshine that Sciò had made for the occasion, followed by music and dancing. The forecast led her to abandon that plan and move the party to the restaurant’s wraparound terrace, which would allow for a quick escape indoors if the weather turned. But the threat of rain hardly put a damper on the proceedings. The night before, to kick things off, there was an intimate dinner in the dining room, with its high vaulted ceilings, ornamental door frames and arched windows that look out onto the water.

Sciò, swathed in a body-hugging floral Balenciaga dress, greeted the first arrivals to the dinner with champagne on the terrace. “It was like a high school reunion,” she said of seeing friends in person for the first time since the start of the pandemic. “The vibe was really light and excited.” Inside, she’d set a long orange marble table with bouquets of pale pink dahlias in cut-glass vases, chandelierlike candelabras and miniature olive trees, which created a canopy of sorts above the tablescape. Each placewas set with Villeroy & Boch tableware — inky blue with a sprinkling of minuscule gold-colored stars — that Sciò, taking inspiration from the Giotto-painted Scrovegni Chapel in Padua, designed herself for her online shop, Issimo. The night’s menu consisted of what Sciò described as “simple and unfussy” Roman dishes prepared by the hotel’s chef, Antonio Magliulo: light and crispy fried zucchini flowers to start, tagliolini with shaved white truffles or spaghetti with fresh clams, sea bass with summer vegetables and, finally, a decadent homemade tiramisu. Initial plans to keep the evening relaxed, so as to conserve energy for the next event, were thwarted when, after dinner, Sciò dragged a speaker system out onto the terrace and started blasting the Supremes, Diana Ross and Aretha Franklin.

“Marie-Louise surrounds herself with creative, loving people who always come together for her,” saidSciò’s longtime friend Manizeh Rimer (the pair met when Sciò was studying architecture at the Rhode Island School of Design and Rimer was attending nearby Brown University). “Because they know they’re going to have a blast and leave feeling inspired and uplifted.” Saturday morning, Rimer, the founder of Jivamukti Yoga London, helped guests recharge with a restorative class. “We did it in the Getty living room, on the 17th-century carpets, and it was absolutely fabulous,” Sciò recounted. Other guests spent the morning swimming in the hotel’s indoor pool, roaming the grounds or touring the basement museum.

By one o’clock, though, the terrace, which was awash not in rain but a golden late-summer light, beckoned. Ready to reassume her position on the dance floor, Sciò appeared in sequined bell bottoms, an oversize white blazer and gold metallic striped Yves Saint Laurent platform heels. First, guests grazed on a buffet of knots of fresh mozzarella sourced from the nearby Campania region, spaghetti with caviar and smoked burrata, meatballs with tomato sauce and Parmesan, beef tartare with yolky Béarnaise sauce and caviar, crispy cannoli filled to order with sweet ricotta from Bracciano and a fluffy baba drenched in rum and topped with fresh berries and swirls of vanilla cream. Meanwhile, Il Pellicano’s legendary barman, Federico Morosi, who’d driven down from Tuscany for the day, mixed some of his signature cocktails, among them a take on a martini made with lime juice and mandarin liqueur, though he tweaked things here or there depending on the guest. “He already knows everyone,” said Sciò, “and he remembers what you like and don’t like.”

Also there for the event was the English D.J. Paul Harris, who began to play perky remixes of classic songs like Fleetwood Mac’s “Dreams” and various David Bowie hits. “Everyone was so full of energy,” said Sciò, who, when pressed, awarded the title of best dancer to both Kim Scion, a creative consultant, and the fashion designer Andrea Provvidenza, who moved and grooved until well after the sun set over the water. It’s a nightly ritual that has no doubt been witnessed and enjoyed by those residing or working at the property since the Renaissance, a constant that, after the last year or so, feltespecially soothing. So did a weekend dedicated to something as simple as fun and togetherness. After so many months apart, said Sciò, “it was a night we all really needed.” No wonder the crowd was thrilled when, around 6 p.m., a chef appeared in the doorway, his arms laden with steaming plates of cacio e pepe pasta. It meant they could fuel up and carry on. Here, Sciò shares her tips for throwing a partyof your own.

Guests danced to classic songs remixed by the D.J. Paul Harris, whom Sciò flew in for the occasion.Credit…Danilo Scarpati

Be Flexible When It Comes to Seating

Sciò was conscious that many of her guests were keen to reconnect. “I didn’t do assigned seating because a lot of people didn’t know each other, and a lot of people did,” she said. “So I just said, ‘Takea seat and leave a space next to you — and keep it boy, girl, boy, girl.’ I didn’t want it to feel too forced, especially after two years of lockdown. I felt that it was nice to give some freedom. This way, if you were dying to catch up with someone, you could.”

Sciò likes to mix a real range of people at her parties, which means different tastes, ages and points of reference. “I always want to play the kind of music that works for everyone,” she said. She chose D.J. Paul Harris for his crowd-pleasing selection of remixed classics, which successfully got everyone, from her father to her 20-year-old niece, onto the dance floor. “It’s the music they know,” she added. “Not oonze-oonze techno, which I love but realize is not for everyone.”

Give Your Guests a Tour

Sciò always makes a point of taking new guests on a tour of a property and is especially fond of showing them the mosaic flooring and ceramic vessels on view on La Posta Vecchia’s lower level. “My friends always make fun of me for just calling it the basement,” said Sciò, “but I think it’s quite extraordinary.” And, while most homes do not have their own antiquities gallery, showing people around is a good tactic for putting first-time visitors at ease and creating a kind of intimacy.

Consider Every Kind of Drinker

“I think during lockdown so many people either drank way too much or did not drink at all. So I thought a good in-between would be to have organic wines available,” said Sciò. In addition to Morosi’s signature cocktails, Sciò stocked the bar with Ampeleia, a biodynamic, sulfate-free wine cultivated in the Maremma region of Tuscany. “It makes such a difference to drink the kind of wine that doesn’t make you wake up with a splitting headache,” said Sciò.

Don’t Forget About the Morning After

But be prepared for headaches, too. “When people stay over, I try to take care of every single detail,” said Sciò. This includes “having Alka-Seltzer put on the bed at night during turndown. So, if someone has a headache, they wake up feeling much better. It’s an Italian thing.”

“I always try to make sure that all the guests who’ve been here before have different rooms. Every room is unique, and I want to make sure they have a new experience,” Sciò said. Even if you’re working with a single spare bedroom, rather than a 19-room Renaissance villa, find a way to make each visit different. Try placing a few seasonal flowers in a vase by the bed or playing around with the color scheme by using a different set of sheets and throw pillows.

The Consulting Firm Billionaires Turn to When They Give Away Money

Is It OK to Claim a Religious Exemption to the Covid Vaccine?

How to Make a Personal Logo

Tony Kushner, Oracle of the Upper West Side

In a World of Pure Imagination