AS YOU PASS through the cast-iron gates that lead to the artist Agnès Debizet’s country studio on an old farm in the French village of Saint-Maurice-aux-Riches-Hommes, it can feel that you’re entering another world altogether. Ninety minutes northwest is Paris, where Debizet, 63, owns an apartment in the Marais, but here, across a group of 19th-century farm buildings that surround a grassy courtyard, are more than 150 sculptures from her 40-year-long career. Inside the courtyard sits “Évolution” (2007-15), a monumental installation of approximately 40 stoneware sculptures that gradually increase in size, from one that resembles an ostrich egg to eight-foot towers that recall morel mushrooms, all a sun-bleached white with a porous, coral-like texture. Currently, the work is arranged in a circle surrounding a linden tree, but Debizet is constantly changing its configuration (a snaking line, a chaotic pile), something she does with the majority of her creations. 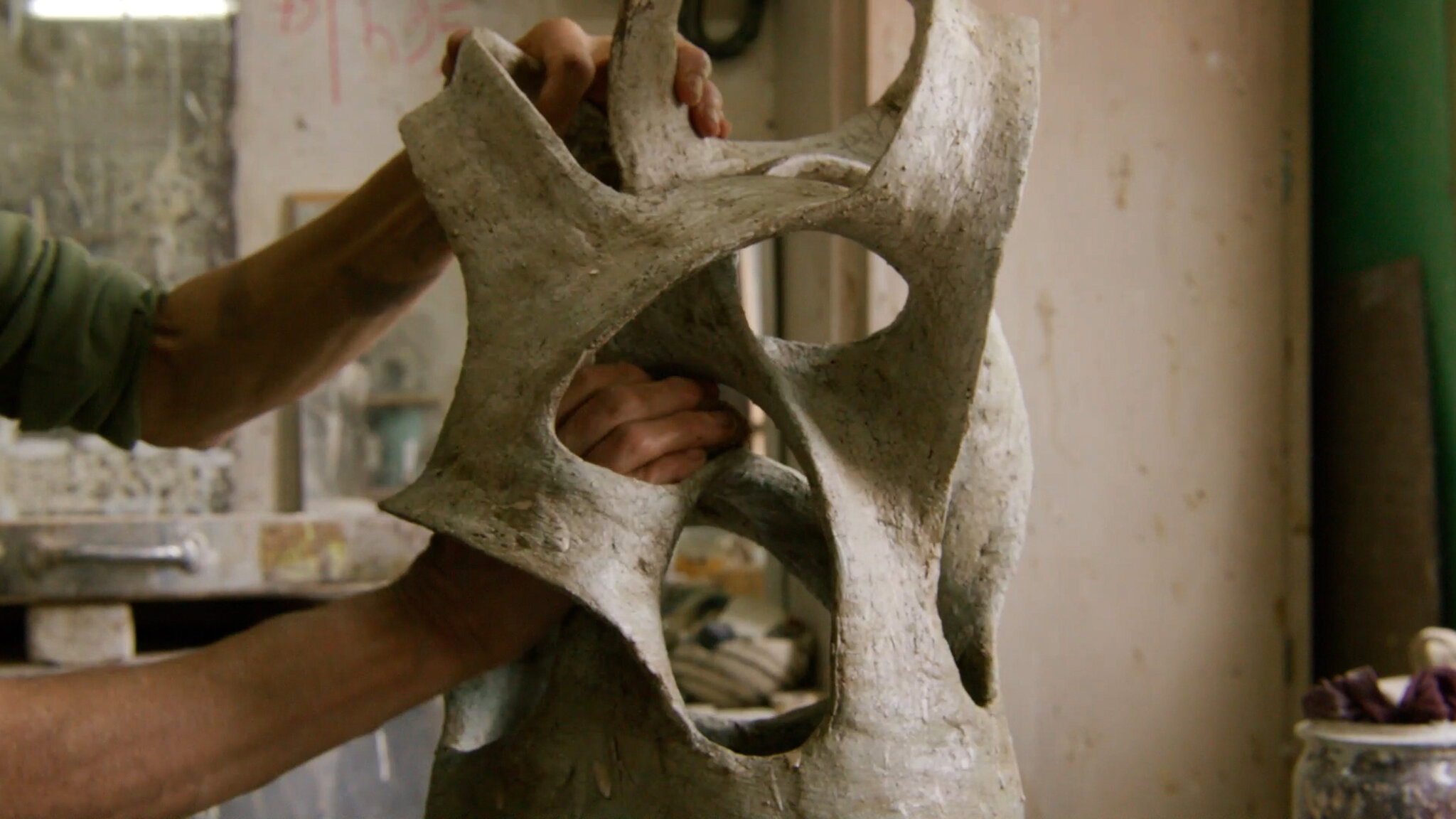 The artist shows off her signature glazing technique as she creates a whimsical ceramic lamp at her studio.CreditCredit…Gautier Billotte

Aside from the ceramics classes she took in Paris in the 1980s, Debizet is almost completely self-taught. “I didn’t fit in the traditional ceramics scene, and without a degree from the École des Beaux-Arts, I wasn’t really accepted in France as an artist,” she says. In the early stages of her career, Debizet sculpted while raising four children, who often claimed her figures as toys — a particular favorite was an earthenware sculpture in the shape of an old-fashioned TV covered with tiny faces. “I knew from the first moment I had clay in my hands that, with it, I could create all that I wanted,” she says. Over time, she developed a distinctive technique that has come to define her work: She paints black earthenware slip into cracks and imperfections in the porcelain glaze of her stoneware sculptures, producing a raku-like effect. These fractures are a result of the exceptionally high temperature at which Debizet fires her work, which can cause splinters and even explosions in the kiln. These spontaneous mishaps have become Debizet’s signature. “I’m always tweaking, making mistakes and trying again,” she says. “In a way, these layers of uncertainty and error are my artistic identity.” When her gallerist Victor Gastou, of the venerable Paris-based Yves Gastou Gallery, first saw her body of work, he was struck by its singularity. “I immediately understood that I was in the completely unique universe of an artist who was making her own world,” he says.

Debizet’s language of sculptural forms ranges from shapes resembling Möbius strips to ones evoking morel mushrooms.Credit…Ilyes Griyeb
A ring of stalactite-like ceramic sculptures rises out of the ground in the artist’s garden.Credit…Ilyes Griyeb 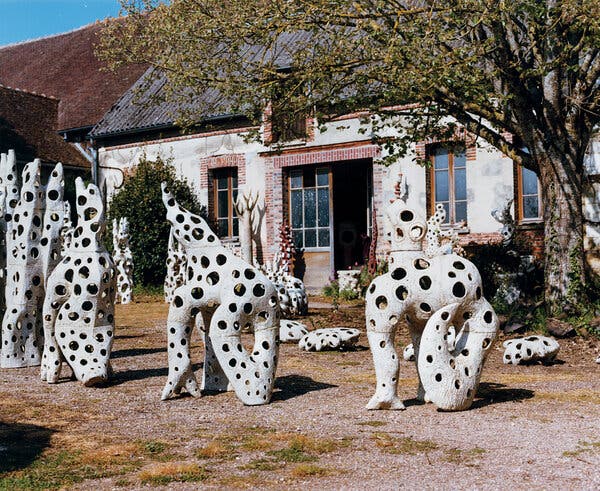 DEBIZET’S TEXTURED FORMS occupy every corner of the estate, from the gardens to the interiors of the property’s six houses — her atelier, living quarters and four outbuildings. Her first work, from 1981, of a dragon craning its neck, is enclosed within a rusted rabbit cage; nearby are human-size towers covered in hundreds of little white faces, and a monumental figure that looks like Nike of Samothrace sitting on tree roots. In Debizet’s studio, a former cow stable with lofty exposed wood-beam ceilings, everything from amoebic shapes to larger faunalike silhouettes are in various stages of development.

Between Debizet’s ceramics atelier and her cozy four-bedroom clapboard cottage, which is painted in shades of olive, clementine and parchment, the backyard garden displays a cluster of large-scale pieces: A ring of green-glazed stalactite-shaped forms rise from the ground. Another work, at the edge of the lawn, depicts an upside-down tree trunk, its roots growing toward the sky, while under a large maple tree, a rust-colored head of a man rests atop a pedestal. While many of the property’s sculptures are constantly in motion, being replanted and reinvigorated, the man’s head, gazing upward at the maple, has remained untouched for years. “They have been having an interesting conversation for so long,” says Debizet of the head and the nearby tree. “I couldn’t possibly separate them.”

The Visionary Community of the Harlem Y.M.C.A.

The Birkin Bag Gets an Update

A New Wellness Brand That Harnesses the Power of the Garden

He Was Suddenly Sick and Shaking Violently. What Was Going On?