IN A WORLD filtered through screens, a condition made even more acute during pandemic lockdown, the theater’s most anachronistic thrill would seem to be watching lives unfold before us. The actors may not literally be within our grasp, but the lack of a barrier between them and us, the illusion that we are, for once, actually in the room — the sound of the human voice in anguish or joy, a carafe of water crashing to the floor — has never seemed more stirring and essential.

Or perhaps not. Even before Covid-19, many ambitious productions had been taking place not in the three-sided black boxes that defined the experimental zest and emerging punk of the late 1970s, or the crowd-pleasing theater-in-the-round pioneered in ancient Greece and Rome and revitalized in the mid-20th century, but in elaborately engineered glass cubes that evoke the International Style’s high Modernism and the minimalist penthouses of the contemporary metropolis. There would not seem to be a more flagrant violation of dramatic immediacy. 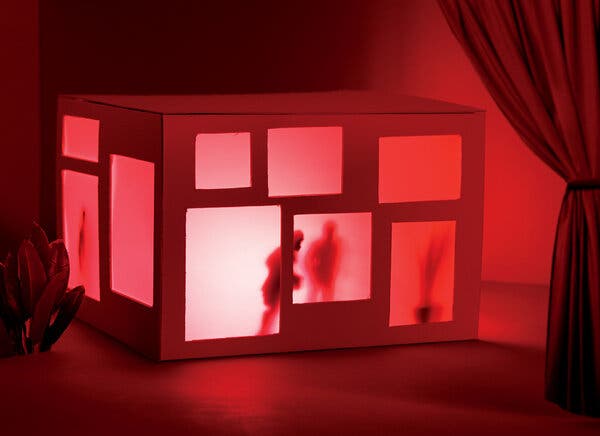 And yet the design is, as of late, ubiquitous. After a long Broadway hiatus, “The Lehman Trilogy,” directed by Sam Mendes, opens next month at the Nederlander Theater; during its nearly three-and-a-half-hour duration, three actors play a cavalcade of characters from the more than 160-year history of Lehman Brothers, the infamous investment house, encased in a revolving transparent box conceived by the British designer Es Devlin. The 2016 Young Vic production of Federico García Lorca’s “Yerma” (1934), directed by the then-31-year-old Australian Simon Stone, was restaged in 2018 at New York’s cavernous Park Avenue Armory in what was essentially a giant terrarium. That same year, the German designer Miriam Buether built a glassed-in room with a huge tilting mirror as the back wall for a revival of Edward Albee’s “Three Tall Women” (1991), directed by Joe Mantello on Broadway. And for his 2017 National Theater adaptation of the film “Network” (1976), which came to Broadway the following year, the Belgian auteur Ivo van Hove put his stage manager in a large glass box, casting him as a character who ran both the actual play and the mythical television broadcast at the center of the plot.

A thoroughly contemporary material, glass creates what Buether calls “an ultimate filmic quality, like looking through a lens.” Even before fear of infection drove us behind protective plexiglass shields and reduced most human interaction to Zoom, theater audiences had come to appreciate the trippy perceptual effects of multimedia innovations — video projections have become commonplace onstage, particularly as pioneered by van Hove and others. Such effects are now part of the theatrical experience, a way to warp audience expectations. Once, updating a classic with, say, modern dress or gender-blind casting was provocative and transformational, allowing us to see the text anew; now, the stage itself has become the terra nova that jolts us, a glass cage making literal these works’ themes of isolation and vulnerability.

FOR THE VIEWER looking at something through it, glass offers both a subtle shift and a seismic one; it alters everything while visually changing very little. “You know that what you’re watching is different, but you can’t quite tell why,” says Buether, 52, who, for the second act of “Three Tall Women,” created two rooms — mirror images of each other — separated by a wall of plexiglass, and then placed a mirrored wall behind them, creating multiple images of the characters and echoing the play’s notions of identity and time. “It’s like making the fourth wall tangible, as though peering into a display case. You adjust to it quickly — I mean, it’s transparent — but it never really disappears.”

For Stone, who has set shows behind glass a half dozen times, beginning with his 2011 production of Henrik Ibsen’s “The Wild Duck” (1885) at Sydney’s Belvoir St Theater, the conceit works best with a particular part of the canon: intimate plays “that plumb the dark night of the soul,” he says. A specialist in reviving the works of domestic naturalism that distinguished European theater in the late 19th and early 20th centuries, he believes that using glass, often in near-bare environments, has enabled him to reinvent these plays for a new generation. Back when Ibsen was writing, Stone notes, it was radical to set works in bourgeois living rooms instead of castles and fields, but such environments now seem banal. “I thought to myself: ‘What would happen if you actually put the glass between the action and audience?’” he says. “‘What if you make it an obstacle that has to be overcome, that the audience has to lean into?’”

A production of “The Wild Duck” from Sydney’s Belvoir St Theater, at the Barbican Theater’s International Ibsen Festival, 2014.Credit…Theatrepix/Alamy

For “Yerma,” he wanted the title character’s descent into madness after she’s unable to bear a child to seem inescapable; for “The Wild Duck,” he was seeking to add a clinical aspect to a plot that culminates in a young girl unexpectedly shooting herself in the chest: “I was very conscious of not turning it into suicide porn,” he says. He used a series of revolving stacked glass boxes — roughly evocative of a Modernist chalet — for his 2017 Theater Basel production of Anton Chekhov’s “Three Sisters,” published in 1901, “because it made the realities of their lives even more brutal and confined.” Paradoxically, actors thrive in the glass box, he adds: “Sometimes being fully exposed can inhibit them. You have too close a connection to the audience; you are too aware. The illusion that they are in a private room makes them feel safe.”

Still, working behind glass is not without its unique technical challenges. If you put your cast in a box, especially one with a lid, you cut off all possibility of acoustical naturalism. Many plays these days are miked, but the amplification is designed to be undetectable, creating the illusion of proximity; once there is a closed cube, verisimilitude becomes more complex. “Yes, you lose the sound of the natural voice,” says Stone, “but you gain extreme aural intimacy.”

Devlin, 50, who has designed tour sets for Billie Eilish and Beyoncé, as well as for operas, is also accustomed to the trade-offs of a glass box. For her and Mendes, who began as a theater director before moving to film, this kind of spare set provides a juxtaposition to an epic historical work like “Lehman.” The boardroom, as well as the other office spaces in which the play unspools, “conveys both claustrophobia and expanse, intruding on the audience’s domain,” she says, and winks at the glassed-in conference spaces that have become corporate America’s heavy-handed attempt at conveying “transparency.” Inside, the box is divided into three chambers with internal glass partitions on which the actors scrawl the names of the Civil War dead and the price of commodities. The rectangle’s perimeter is formed by glass panels between which are open gaps, which improve the acoustics and act like apertures, allowing the action to move from wide screen to close up. That the box also revolves creates the equivalent of a Hollywood tracking shot: “Sam loves that, of course,” Devlin says. 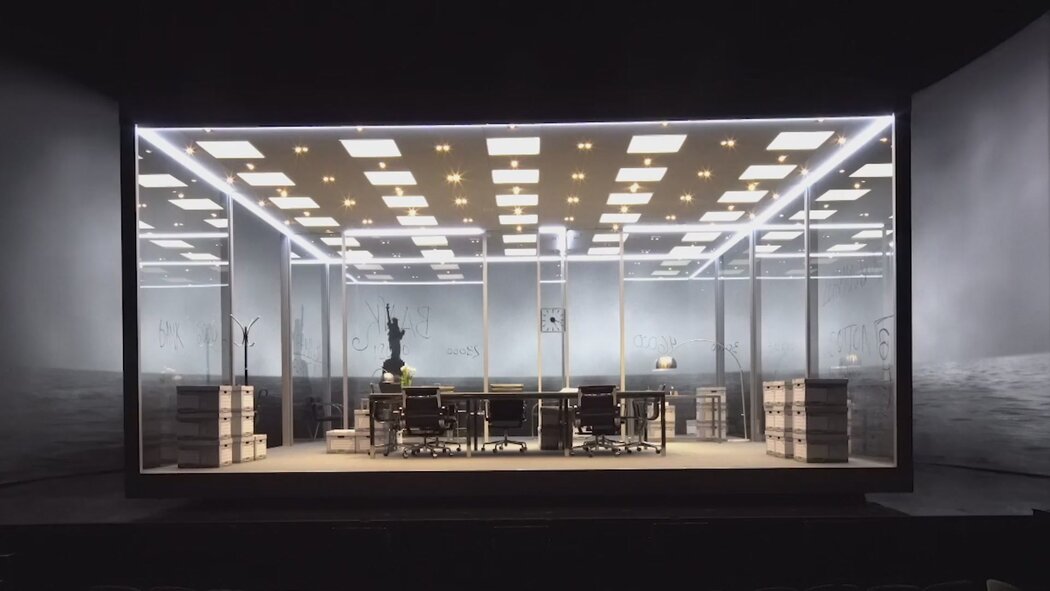 A revolving glass box returns to Broadway in “The Lehman Trilogy.”CreditCredit…By Nicholas Calcott

But cramming the action into a single room also has a deeper significance. When Devlin worked with the director Trevor Nunn on the 1998 London revival of Harold Pinter’s “Betrayal” (1978), which took place in a deconstructed facsimile of a domicile in which the windows were mere outlines on the walls, she referenced the British sculptor Rachel Whiteread’s 1993 “House,” a ghostly, solid cast-concrete replica of a rowhouse, which stood on an East London street for three months. Together, the sculpture and the production reminded viewers how the confines of home can be both solid and ephemeral. For “Lehman,” Devlin was also inspired by “Tango,” a semi-animated eight-minute 1981 short by the Polish director Zbigniew Rybczynski, in which dozens of people seem to simultaneously inhabit a small front parlor, their elaborate dance compacting time and space. “There’s a message embedded in a single room,” says Devlin, “that architecture itself is the vessel through which history — whether intimate or monumental — is enacted. Glass helps you make that message explicit: A room is more than just a passive container. It remembers life.”

What Does It Mean to Eat What You Fear?

TikTok Wants More Ad Dollars, and It Has a New Plan to Get Them

Covetable Timepieces That Give New Meaning to the Term ‘Winter Whites’