In 1912, every resident of a mixed-race fishing community living on a small island called Malaga was evicted from their home by the state of Maine. The area is said to have been settled about a century earlier when, in 1794, a formerly enslaved Black man, Benjamin Darling, bought nearby Horse Island and made a home there with his wife. In the 1860s, their descendants branched to Malaga, which, over the years, grew into a population of dozens of people.

The eviction by the state was a catastrophe: Eight islanders were committed to the Maine School for the Feeble-Minded, according to the Maine Coast Heritage Trust. Structures on the island were nearly all destroyed, and descendants were discouraged from coming back. One hundred years later, in 2010, the governor of Maine apologized for the eviction, but the haven that once was has never been re-established. Today, Malaga is a public preserve run by the Maine Coast Heritage Trust, and all that’s left of its past are graves and a schoolhouse, which have been removed from the island, and some abandoned wells.

That history is at the core of Paul Harding’s new novel, “This Other Eden,” out Jan. 24 from Norton. Instead of Malaga and the Darlings, Harding’s book tells the tale of the fictional Honey family, who, like the Darlings, are descended from a formerly enslaved man and are eventually expelled from their home, Apple Island. The novel — which closely follows a handful of Apple Islanders as well as the missionary who inadvertently brings about their downfall — is a harrowing tale of paradise lost and a lyrical examination of people in isolation just trying to get by.

That is a summary of the plot; Harding himself is reluctant to define the book. Twice during a recent interview, he artfully, playfully, steadfastly dodged requests at providing a quick pitch for the novel. “I think of my writing as interrogative,” Harding, 55, said. “You just go in there, and you just listen and look and describe. The mode can never be explanatory. There’s no thesis. There’s no argument. It’s purely descriptive, just always asking, ‘What is it like, what is it like, what is it like?’”

Instead, Harding shared what the book is not: It’s not the record of Malaga. “I’m not the person to write the history of Malaga Island; I have no organic connection to it; I didn’t grow up there,” he said. “Those people’s personal lives are not mine to take up.”

Rather, the history of Malaga provided a framework for Harding’s own novelistic imaging. “I was just thinking, it’s the week before they get evicted off the island,” Harding said, “and over the course of telling that story, it would open onto all other aspects of history and literature and etc., etc., etc.” 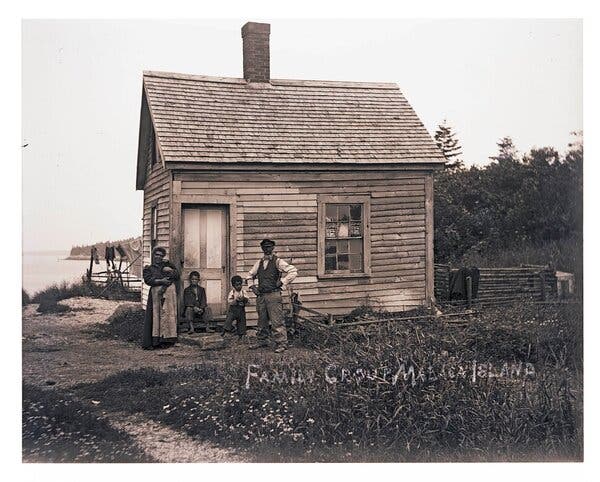 Malaga Island was once the home of a mixed-race fishing community, but an eviction by the state of Maine in 1912 displaced the island’s residents.Credit…Herman Bryant/The Maine State Museum

That phrase, “all other aspects,” is important. “This Other Eden” is full of references to the Bible — “the Old Testament is the original displacement,” he said —; to other literary works, like “Moby Dick”; and to history. For instance, he learned that around the same time as the Malaga eviction, the first international Eugenics Congress was happening in London, so he put that in the book too.

The result is a novel that is both devastating and meditative, a combination that is characteristic of Harding’s work. His Pulitzer Prize-winning debut, “Tinkers,” introduces a terminally ill man eight days before he dies, but instead of focusing on the man’s death, the novel reflects back on his relationship with his father, and then his father’s relationship with his father. His sophomore novel, “Enon,” followed a man’s isolation and grief after his teenage daughter is hit and killed by a car.

That is all to say, Harding’s novels frequently feature characters taking quiet steps through calamity. “I teach Shakespeare, I teach the Bible,” Harding, who is currently a writing professor at Stony Brook University. “I know my tragedy.”

But if the stories that Harding writes feel like stuff of folklore, so too does the tale of his rise as an author. 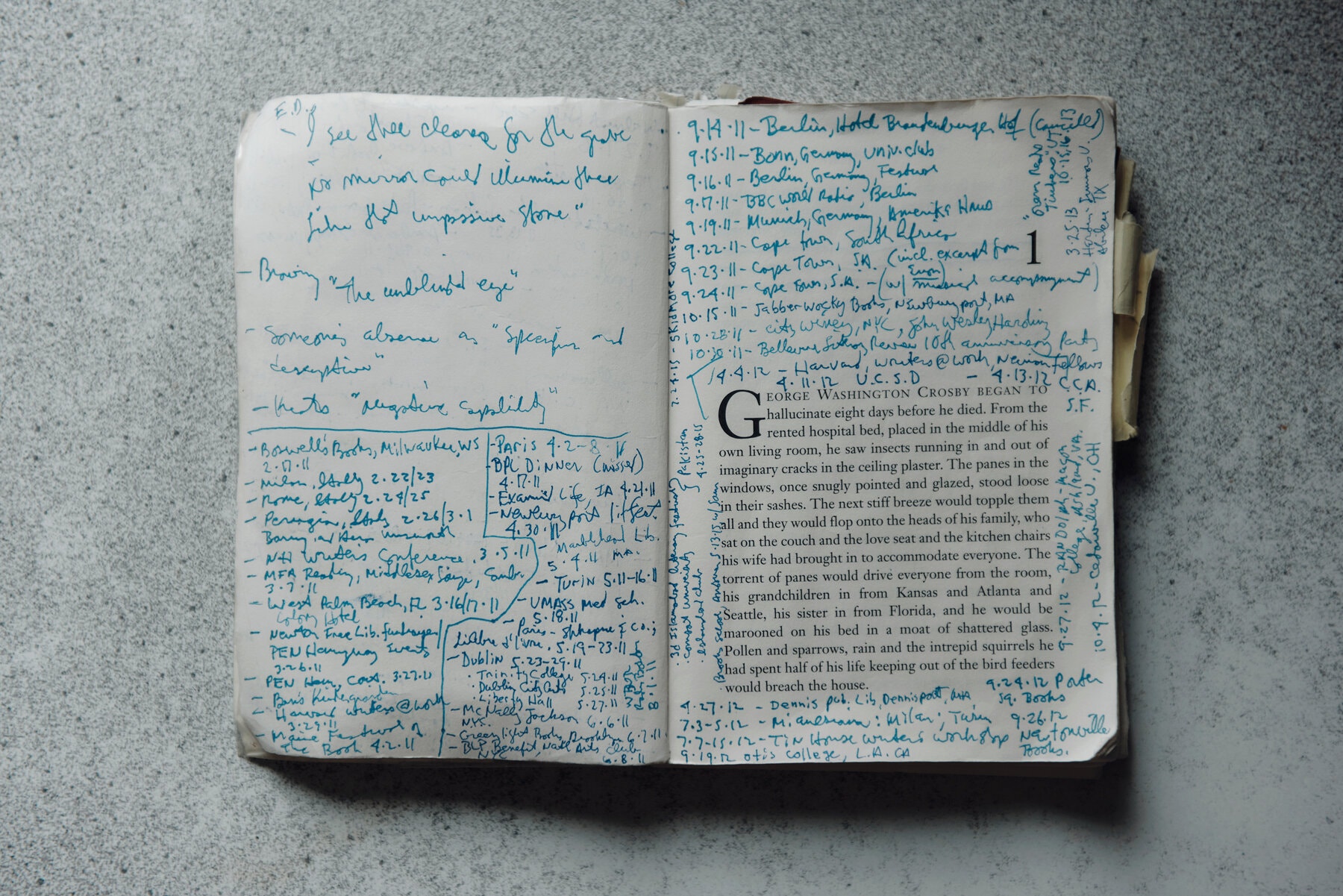 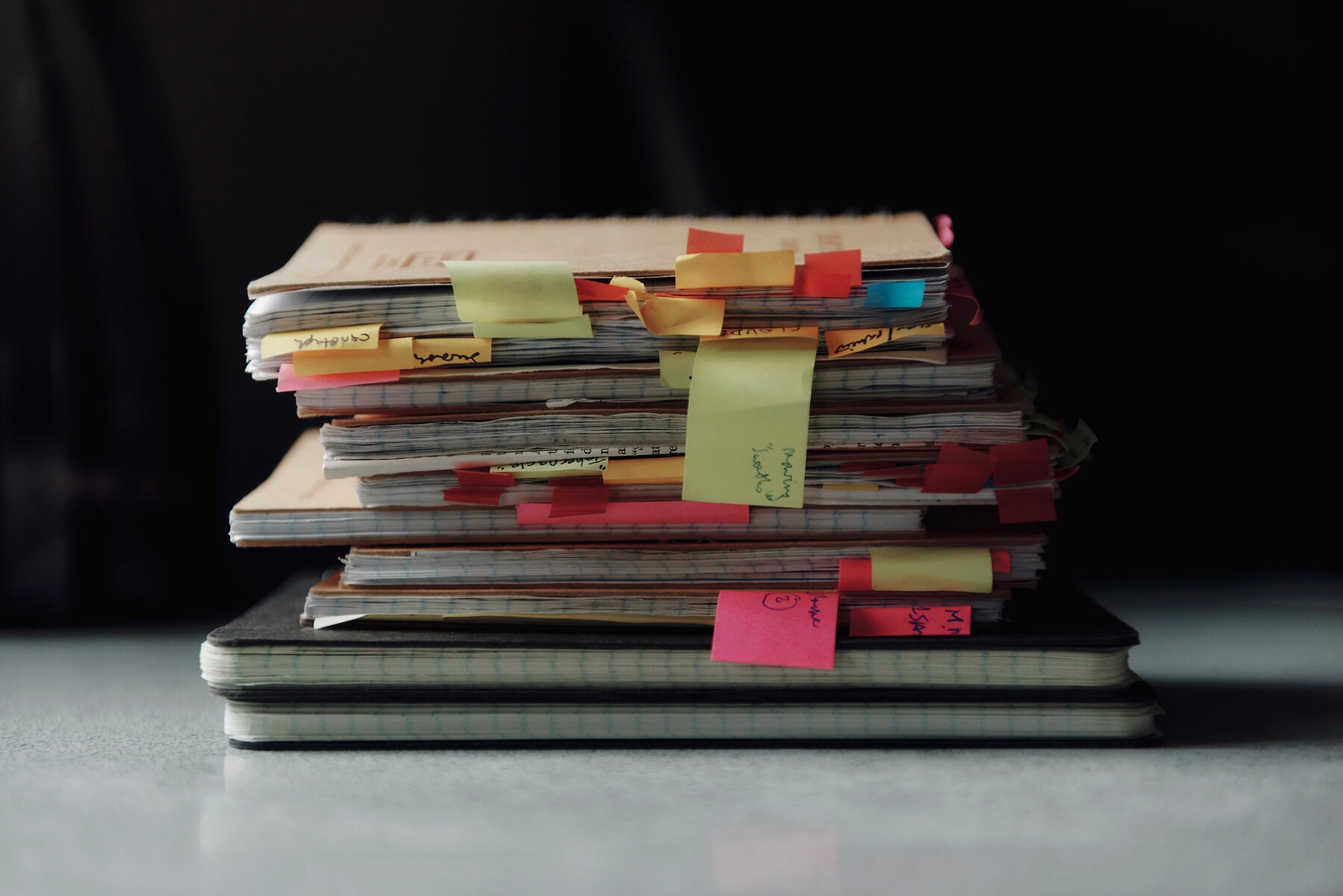 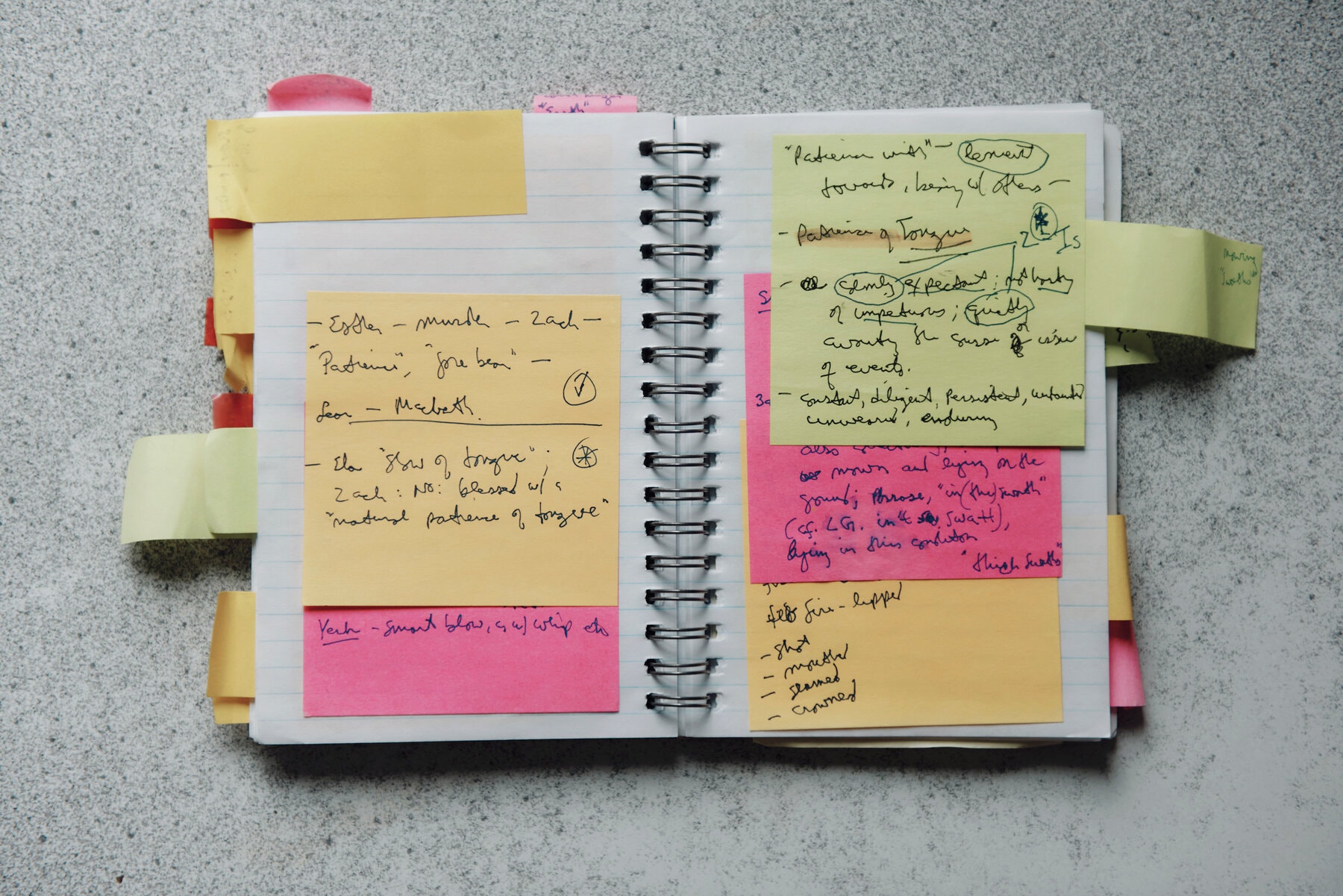 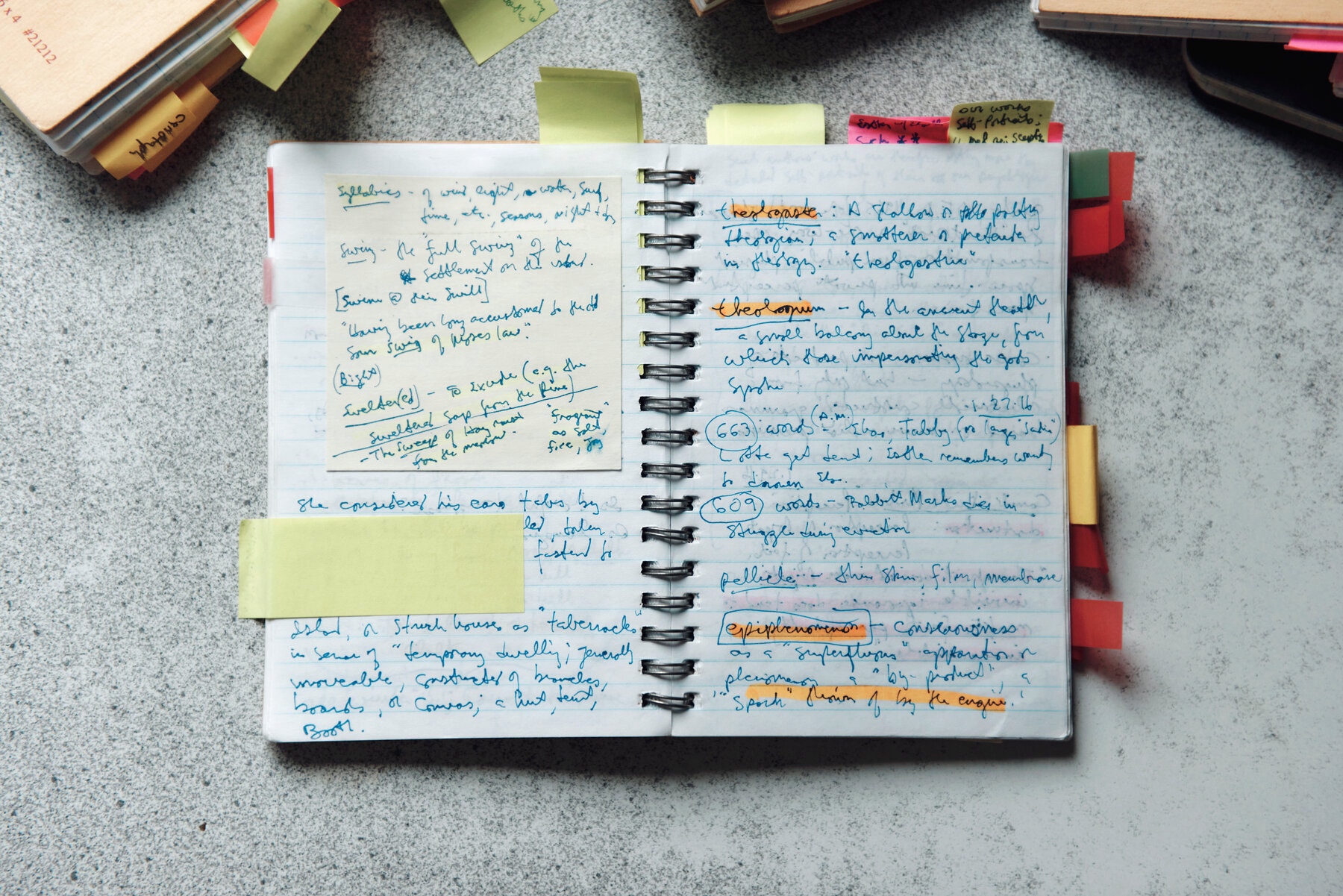 A collection of notebooks that Harding has filled while writing his novels. “One thing I’ve learned as a novelist is just to not be in a hurry,” he said. “You have to let it build up and take time to let things overlap and implicate themselves.”

Harding was raised in Wenham, Massachusetts (originally called Enon). Growing up, he felt overwhelmed and uninspired by day-to-day life. “It was just so unbeautiful,” he said, “and it always felt kind of violent.” Instead, he found peace in nature. “I would go out into the woods, and I’d be like, ‘there’s the stream,’” he recalls. He would feed birds with his grandfather. “I would go to those places, and I would be like, why isn’t life always like this?”

Harding always loved reading, so he attended the University of Massachusetts Amherst, as an English major. While he was there, he formed a band called Cold Water Flat — he was the drummer — and after graduating, they toured North America and Europe. Then the band broke up, leaving him without a job or a career. Graduate school, and “something with writing,” seemed to be the solution, he said.

He signed up for a class at the New York State Summer Writers Institute at Skidmore College, and it changed his life. “Marilynne Robinson walked into the room,” Harding said. “Within 10 minutes, I was just like, that’s the life I want for my mind.”

He was inspired by her approach to literature. “The level at which she was looking at language, the level at which she was thinking about art and history and theology and all that sort of stuff. It was just like recognizing something,” Harding said. “It’s truth and beauty. It was literally like, my brain is a filament, and I want to be lit like that.”

“I want to write books that stand up to real life,” Paul Harding said.Credit…Tony Luong for The New York Times

That class was also the start of an enduring friendship and literary kinship. “His aspirations for writing are to create something that in some sense or other participates in truth,” Robinson said. “His kind of humanism is based on how minds work and how senses work and how memory implants itself in the landscape and so on.”

After that class, Harding learned that Robinson taught at the Iowa Writers’ Workshop, so he decided to apply. “I was like, oh, a state school, I can get into a state school. That’s how naïve I was.”

Harding was accepted in 1998. As part of his application, he had to write two short stories, one of which was a version of “Tinkers.” Throughout the program, he worked on different novel, but, in 2000, after he had graduated, Harding had a realization: The novel was terrible. So he scrapped it, and returned to that application story, experimenting with expanding it into novel. He also began teaching writing classes at Harvard, which offered him steady work, but he was still having trouble getting “Tinkers” published.

Then he had two lucky breaks.

First, a friend of Harding’s said he was going to a dinner with a novelist friend, and that novelist friend was bringing an editor working at a new boutique press called Bellevue, and would it be OK if he mentioned Harding’s book? A week later, he got a call from Bellevue’s editorial director, Erika Goldman: the company was interested in his book.

“Tinkers” finally published in 2009, a decade after he initially started working on it. The release was small, but praise spread by word of mouth. Then lucky break No. 2 happened: Among those recommending the book was a New Hampshire bookseller, Michele Filgate. One of the people she recommended it to was Rebecca Pepper Sinkler, who, it turns out, was the chair of the Pulitzer fiction jury that year. (Sinkler is a former editor of The New York Times Book Review.) “Tinkers” won the 2010 Pulitzer Prize for fiction, which kick-started Harding’s career. “It was just getting shot out of a cannon,” he said.

Still, the road to “This Other Eden” was a bumpy one.

After the Pulitzer, Harding secured a two-book contract with Random House. He finished “Enon,” then began casting about for an idea for another novel, consuming everything he could find. “I’m a junkie for ephemera,” Harding said. “One thing I’ve learned as a novelist is just to not be in a hurry.”

“I teach Shakespeare, I teach the Bible, I know my tragedy,” Harding said.Credit…Tony Luong for The New York Times

He began reading about the 19th century Black landscape painter Charles Ethan Porter, about organized labor movements after the Civil War and about racially integrated communities. Those interests led him to a Down East Magazine article about the history of Malaga Island. The idea checked off many personal interest boxes for Harding. He had a story.

He completed a draft of the book in 2018, but before he could work on it with his editor at Random House, Susan Kamil, she died. “I was sort of orphaned,” Harding said.

His agent re-auctioned the book, he said, and Norton bought it. “I was struck by the breathtaking beauty of the prose and imagery,” Alane Mason, Harding’s editor at Norton, said.

She especially taken, she said, by the nearly nine-page scene of a devastating flood that opens “This Other Eden”:

“What was always so eerie about it afterward, Patience always said, what was so terrifying about it that made her bowels feel as if they’d turned to sand, was how quiet it all seemed, like a breath drawn and held, right before it hit, how breathtakingly fast but nearly silent and so just plain beautiful it was, all those people and trees and ships and horses cartwheeling past within the billows. It wasn’t silent, really, but more, so loud it was too big to hear.”

“It’s impossible to read that and not say, ‘wow,’” Mason said of the scene. “Beauty, and power, something ancient and contemporary all at once.”

But, at the end of the day, it’s not Harding goal to impress. Instead, he said, “I want to write books that stand up to real life.”

MJ Franklin is an editor at the Book Review.

A Modern Take on the Hudson River School Tradition