Sign stealing has long been a part of baseball strategy. When a batter is hitting, his teammates carefully watch a catcher’s fingers or body language to figure out what pitch is about to be thrown. That is all fair play as long as teams do not use any electronic devices, such as cameras or computers, to facilitate the process.

During past seasons — according to a newly released, partially redacted letter from Major League Baseball Commissioner Rob Manfred to Yankees General Manager Brian Cashman sent in 2017 — the Yankees used electronic devices to decipher and share opposing teams’ signs. The letter came after the Yankees had accused the Boston Red Sox of using a similar process.

“The Yankees’ use of the dugout phone to relay information about an opposing Club’s signs during the 2015 season, and part of the 2016 season, constitutes a material violation of the Replay Review Regulations,” Manfred wrote to Cashman.

“By using the phone in the video review room to instantaneously transmit information regarding signs to the dugout in violation of the Regulations, the Yankees were able to provide real-time information to their players regarding an opposing Club’s sign sequence — the same objective of the Red Sox’s scheme that was the subject of the Yankees’ complaint.” 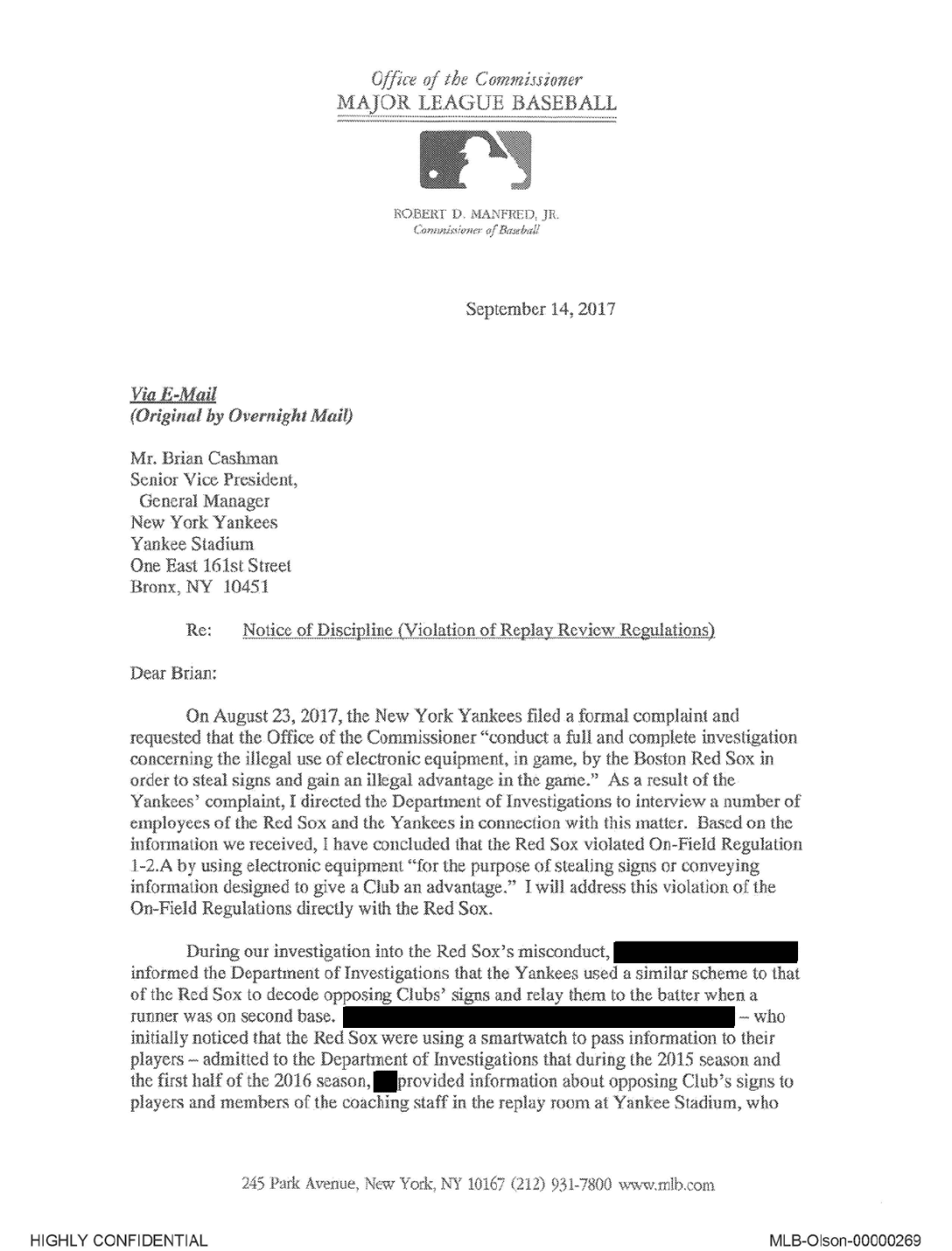 The reason the Yankees were punished in a less severe way (a $100,000 fine earmarked for a charitable cause) than the Houston Astros and the Boston Red Sox, World Series-winning teams that were dealt suspensions, fines, a loss of draft picks and public scorn? Those teams continued their sign-stealing ways after M.L.B. began cracking down on it and instituted clear terms of punishment.

The contents of that M.L.B. letter to the Yankees — which became public on Tuesday ahead of an expected unsealing in court — weren’t exactly new or surprising. Paranoia about opponents stealing signs between pitchers and catchers has existed throughout baseball history, but the influx of technology in the game had introduced new fears.

New ways to skirt the rules emerged in 2014, when M.L.B. expanded its use of instant replay review, which established rooms near each team’s dugout with live video feeds to help coaches decide whether or not to challenge a play. Players were also allowed to visit these rooms during games to consult video of their pitching or hitting. But any use of technology to decode or relay opponents’ signs during a game was still prohibited.

In 2018, the Boston Red Sox were found to have used Apple Watches in a sign stealing scheme that led to the suspension of Manager Alex Cora.Credit…Michael Dwyer/Associated Press

Although concern had been building among many teams that their opponents were going too far, the first big public sign that technology was being abused came in 2017, when The New York Times reported that the Yankees had filed a complaint with M.L.B. accusing the Red Sox of relaying signs from video replay personnel to the dugout via an Apple Watch. After an investigation of the Red Sox, which led to a fine, M.L.B. admitted that it had become increasingly difficult to monitor the inappropriate use of electronics.

“At that point in time, sign stealing was utilized as a competitive tool by numerous teams throughout Major League Baseball and only became illegal after the Commissioner’s specific delineation of the rules on September 15, 2017,” the Yankees said in a statement on Tuesday, later adding that they have had “no infractions or violations” since.

A season that was in doubt is suddenly in full gear.

That day, Manfred sent a memorandum to all 30 teams warning them about illegal sign-stealing and stating that club management, not players, would be held accountable for any such cheating. In March 2018, M.L.B. sent another memorandum to teams that made clear that replay rooms and video feeds were not allowed to be used for stealing signs during games.

(M.L.B. has since taken further steps to try to curb such behavior.)

This where the Yankees’ story, though, veers from those of the Astros and the Red Sox.

The Astros were found, according to a M.L.B. investigation released in January 2020, to have employed a scheme through the 2017 playoffs and for at least part of the 2018 season that involved using cameras and monitors to decode opposing teams’ signs and tip off Houston’s batters, often by banging on a trash can just outside the dugout.

The letter from M.L.B. was addressed to General Manager Brian Cashman. It said the Yankees had committed similar infractions to what they had accused the Red Sox of doing.Credit…Mike Stobe/Getty Images

Manfred punished the Astros by issuing one-year suspensions to General Manager Jeff Luhnow and Manager A.J. Hinch, both of whom were subsequently fired by the team owner Jim Crane, and by fining the team $5 million and docking a first- and second-round draft pick in 2020 and 2021.

The Red Sox were found, according to a separate M.L.B. investigation released in April 2020, to have used a scheme in 2018 that was more limited in scope than the Astros’ but still involved decoding opponents’ signs while watching live video during games and passing that information along to players.

Manfred punished the Red Sox by issuing one-year suspensions to Manager Alex Cora, who was also part of the 2017 Astros’ scheme, and J.T. Watkins, Boston’s video replay operator. The team also lost its second-round pick in 2020.

Manfred’s once-private letter to the Yankees came out now because of a court case, dismissed by U.S. District Judge Jed S. Rakoff in April 2020, between fantasy sports contestants who claimed they were damaged by sign stealing in M.L.B. The fans, who sued M.L.B., the Astros and Red Sox, claimed that Manfred’s 2017 letter to Cashman, which emerged during discovery, contradicted the league’s public statements at the time.

The Houston Astros, who used a sign-stealing scheme on their way to a World Series title in 2017, have dealt with years of abuse from opposing teams’ fans.Credit…David J. Phillip/Associated Press

The three-page letter from Manfred to Cashman explained how M.L.B. had found that the Red Sox had violated league rules. Manfred wrote that during the investigation into the Red Sox, the league was told (by a person or group whose identity was redacted) that the Yankees “used a similar scheme to that of the Red Sox” to decode opposing teams’ signs and relay them to the batter when a runner was on second base.

Manfred also wrote that a redacted person or group, who noticed the Red Sox using the Apple Watch, told the league that during the 2015 season and part of the 2016 season that they provided information on opponents’ signs to players and coaches in the Yankee Stadium replay room, and they relayed that to the dugout.

Finally, Manfred wrote that his office didn’t find any merit to a formal complaint by the Red Sox that accused the Yankees of pointing their YES Network cameras at Boston’s dugout when coaches and players gave signs.

In their statements on Tuesday, M.L.B. and the Yankees pointed out that much of the contents of the letter had been known for some time.

“The Yankees did not violate M.L.B.’s rules at the time governing sign stealing,” M.L.B. said. “At that time, use of the replay room to decode signs was not expressly prohibited by M.L.B. rules as long as the information was not communicated electronically to the dugout. Because rules regarding use of replay had evolved, many clubs moved their video equipment to close proximity to the field, giving personnel the potential ability to quickly relay signs to the field.”

M.L.B. said that it clarified its rules regarding electronic equipment in that Manfred memorandum on Sept. 15, 2017 and drew “a clear line” on March 27, 2018 that no clubhouse or video room equipment could be used to decode signs.

“The Yankees vigorously fought the production of this letter, not only for the legal principle involved, but to prevent the incorrect equating of events that occurred before the establishment of the Commissioner’s sign-stealing rules with those that took place after,” the Yankees said. “What should be made vibrantly clear is this: the fine noted in Major League Baseball’s letter was imposed before M.L.B.’s new regulations and standards were issued.”

Tags
2017 Had Manfred Teams That

One Final Look at a Nets Season That Fell Short

This Time, D. Wayne Lukas Is Riding Into the Preakness on a Filly

How Do You Solve a Problem Like a Tied Set?

Carlos Alcaraz, Just 19, Has His Eye on a Grand Slam Title