TEMECULA, Calif. — Legal sports betting in the United States accelerated in 2021 as a flurry of states either overcame legislative logjams, as Ohio did just before Christmas, or signed off on online wagering, as New York did just after Election Day.

But those efforts are likely to pale in comparison to the all-out lobbying, campaigning and legal jousting in 2022 involving what a DraftKings executive recently called “one of the holy grails” in sports betting: California.

By November, Californians may be asked to vote on as many as four sports betting initiatives. That’s why deep-pocketed interests, including national sports books and Native American casinos, have been gearing up to spend $200 million to persuade voters in California to support their particular proposal — or to reject the others.

One measure that has already qualified for the state ballot, sponsored by powerful tribes in California, would add sports wagering, but only in person, at tribal casinos or horse racing tracks. Online betting initiatives, now gathering signatures, dangle the prospect of making bets anywhere through the internet. Others offer a middle ground.

If one of the measures passes, nearly two-thirds of Americans will live in states that allow or regulate sports betting. And with California and New York on board, sports wagering would essentially be national in scope, fueling a market that Goldman Sachs recently estimated could grow to $40 billion in revenues in a decade from $900 million now. 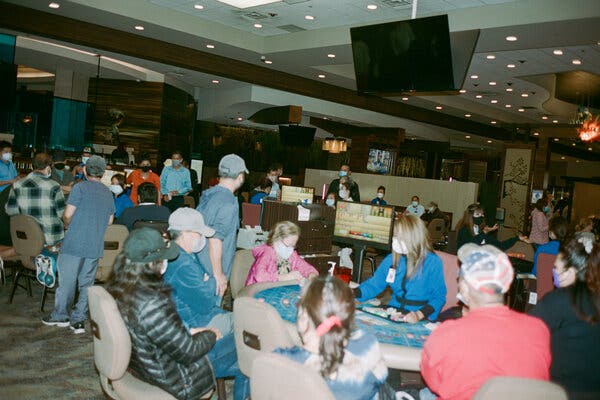 Patrons at the Gardens Casino in Hawaiian Gardens, Calif.

Yet gambling expansion in California has often fallen short or been torpedoed by competing interests. Indeed, California’s card rooms, which primarily operate around larger cities and offer a more limited range of games, just filed a lawsuit to invalidate the qualified tribal measure.

“We’re never going to get sports betting figured out at any level unless California comes on board,” Jason Giles, executive director of the National Indian Gaming Association, said at a recent sports betting conference at the Pechanga Resort and Casino in Temecula. “That will be the game changer for the United States.”

Since the Supreme Court’s decision in 2018 to strike down a federal law banning commercial sports betting in states other than Nevada, more than 30 states have authorized sports wagering, including about a dozen in the last year. More than 20 states have gone live.

“Look at this massive expansion across the country and where we are — it’s becoming very mainstream,” said Brandt Iden, a former state representative in Michigan who pushed to legalize sports betting in his home state. Iden is now head of government affairs for Sportradar, which collects and analyzes data for sports books. “I talk to legislators who say, you know what, I don’t support gambling, but everybody is doing it.”

A cashier window at the Hollywood Park Casino.

Of the holdouts, Texas considered several bills in 2021, and some lawmakers expect momentum when the legislature reconvenes in 2023. Florida, meanwhile, is a mess: A federal judge recently blocked the Seminole Tribe’s new sports betting app, and DraftKings and FanDuel are racing to gather enough signatures to get a referendum on the 2022 ballot.

In California, gambling — mostly on slot machines and blackjack — has been legal for two decades on tribal lands under compacts negotiated with the state. The state also permits gambling at horse racing tracks, which was legalized in 1933, and card rooms, which trace their lineage to poker-playing miners during the Gold Rush.

Any changes would require constitutional amendments through a voter referendum, or legislation backed by the voters.

Previous attempts have bogged down; online poker, for instance, failed in part because the tribes themselves were split. But now there appears to be less resistance on moral and philosophical grounds.

Mary Cheeks, president and general manager of Jamul Casino, asked a question during a panel at the National Indian Gaming Association’s conference at Pechanga Resort Casino.

“If we think about progressive legislation, or legislation to protect consumer welfare, California lies at the forefront, whether we want to talk about minimum wage or privacy protection,” said Marc Edelman, a law professor at Baruch College who has written extensively on sports gambling. “If California legalizes sports gambling it becomes very unlikely that another state would arise as the consumer-oriented opposer of sports gambling.”

This time, the push to expand gambling began before the pandemic, from a coalition of 18 tribes that have dominated casino gambling in the state.

Across the United States, tribal gambling generated $27.8 billion in revenue in its fiscal year from Oct. 1, 2019, to Sept. 30, 2020, despite the pandemic. California is the biggest state, with 66 tribal casinos on federally recognized lands, mostly far from the coast, yielding about $8 billion, with much of that coming from slot machines.

Under the tribes’ initiative, which is backed by a political action committee that has raised more than $13 million, sports wagering would be permitted at tribal casinos and horse tracks. Roulette and games played with dice, such as craps, would also be allowed under the proposal, which qualified for the ballot in May 2021 after collecting more than one million valid signatures.

One thing that is not included is online betting, because the initiative is intended to be “a very measured, incremental step,” said Mark Macarro, tribal chairman of the Pechanga Band of Luiseño Indians in Riverside County.

Mark Macarro, chairman of the Pechanga Band of Luiseño Indians and first vice president of the National Congress of American Indians, at the National Indian Gaming Association’s conference.

“We think this is the right thing to do for tribes and tribal sovereignty,” he said at the conference here. “There’s enough skittishness out there about what could happen to brick-and-mortar facilities.”

The initiative would also create a new civil enforcement tool allowing anyone suspicious of any illegal gambling operations to file lawsuits. It is this provision that has fueled two separate but related efforts by California’s card rooms to defeat the tribes, and to get their own sports betting measure passed.

California has more than 80 card rooms ranging from pub-like places with a few poker tables to sleek behemoths with 270 tables accompanied by restaurants and plentiful A.T.M.s. Collectively, they employ 23,000 people in urban areas, many of them Asian, Black and Hispanic, and pump in $300 million in federal, state and local tax revenues each year, according to the California Gaming Association, a trade group.

Many municipal budgets rely heavily on the card rooms to finance vital services and bolster juvenile justice and other programs, said Mayor Tasha Cerda of Gardena, which has two card rooms. She has backed an initiative that would permit sports betting at the card rooms, tribal casinos and racetracks, as well as allow for internet sports betting. That initiative has raised $450,000 to date. Meanwhile, some of the bigger card rooms have poured more than $24 million into a “No” campaign against the tribes’ initiative.

The gaming floor of the Hollywood Park Casino.

During a recent tour of Hollywood Park Casino in Inglewood, adjacent to SoFi Stadium, the host of the Super Bowl next month and the College Football Playoff national championship in 2023, Deven Kumar, the casino’s general manager, estimated sports betting could increase revenues — already hurt by the coronavirus pandemic — by 20 percent to 25 percent. He and James T. Butts Jr., Inglewood’s mayor, warned that the tribes’ civil enforcement provision could drain their existing business by up to 75 percent, compounded by the inevitable legal costs.

“They are attempting to make gambling a monopoly at the expense of others,” Butts said. “They are not the disenfranchised group they once were. The minority majority cities deserve the opportunity for equity as well.”

In the city of Hawaiian Gardens, where the Gardens Casino supplied 68 percent of the tax revenues in the 2019-20 municipal budget, Keith A. Sharp, the casino’s general counsel, said sports betting could transform Sundays at the casino — now mostly empty — into bustling periods where customers could wager on N.F.L. games while also playing baccarat or other games.

If the card rooms were hobbled, however, Nary Chin, a longtime card dealer and single mother of four, said she feared for her future.

“I learned English in the card room, not school,” said an emotional Chin, who immigrated from Cambodia in 1984. “I am very grateful. This is my home. If I didn’t have this job, I don’t know what I’d do.”

Nary Chin, center, dealing baccarat at the Gardens Casino.

The third initiative comes from online sports books, including DraftKings and FanDuel, that want to enter California for the first time and offer online betting.

The measure requires those companies to partner with tribes, and its supporters say voters can pass both their initiative and the tribes’ in-person one. Most of the state’s profits would be dedicated to homelessness measures, and to the tribes themselves. It would also allow betting on nonathletic events, like award shows and video game contests, but not youth sports or elections, according to the nonpartisan Legislative Analyst’s Office.

“California is one of the holy grails in sports,” added Jeremy Elbaum, senior vice president for business development at DraftKings.

The supporters, buffeted by an initial $100 million from seven sports books, have lined up mayors in Long Beach, Oakland, Fresno and Sacramento, plus advocates working to combat a homeless crisis. They are confident they will collect enough signatures to be certified by the June ballot deadline.

“We are focused on ongoing stable revenue to fund the key programs that we know we need,” said Tommy Newman, vice president for engagement and activation at the United Way of Greater Los Angeles. “If we’re honest, this is regulating and capturing value from something that is happening, for people in communities that absolutely need the investment.”

In November, a fourth initiative arrived supporting both online and in-person betting, backed by a different group of tribes, including the Rincon Band of Luiseño Indians and the San Manuel Band of Mission Indians.

“Out-of-state and international gaming operators want to rewrite the balanced system California has created so that the future belongs to them, paying a pittance to serious local and statewide social problems, and trying to divide the Tribes by offering temporary riches to a few while taking future growth opportunities away from the rest,” the tribes wrote in their application to the California attorney general.

A lawyer for the tribes, Scott Crowell, did not respond to messages seeking comment.

Some gambling analysts believe that a plethora of initiatives may confuse voters, who may just say no to everything. Another wild card is a lawsuit filed in December by two card rooms claiming that the qualified tribal initiative violates the state constitution, which says initiatives can focus only on one subject, because the tribes are trying to add retail sports betting as well as add more table games.

Still, no matter the outcome of the lawsuit or the ballot measures, many sports and technology companies are building audiences through free-to-play games, contests, fantasy sports and national marketing campaigns, even in states where sports betting has not yet been cleared, said Rob Phythian, founder and chief executive of SharpLink Gaming, a technology company.

Teams like the Minnesota Vikings have hired companies like SharpLink to build fantasy games. That could be consequential in California, where there are 19 teams in the N.F.L., M.L.B., N.B.A., N.H.L. and W.N.B.A. — by far the most of any state.

“We’re just a bridge to betting,” Phythian said. “It’s sort of like training the muscle.”

Luxury cars sat in the valet of the Gardens Casino.
Tags
Cali̇forni̇a Sai̇d Sports State That

Golden State Was Down Big. Then Kevon Looney Happened.

Justin Thomas Has Something to Prove, and a Chance to Prove It

In Milan, an Iconic Stadium Isn’t Going Down Without a Fight

Riding the World’s Biggest Waves, Without a Surfboard