YANQING, China — Alexandra Burghardt adjusted her new Winter Olympics outfit in a hotel a few miles away from the bobsledding track. It was two weeks before her debut at the Beijing Games.

“Sometimes I feel like a double agent,” she said. “Two lives to handle.”

In August, Burghardt was running the 100 meters in the blazing heat of Tokyo’s Summer Olympics. Now, six months later, she found herself in subzero temperatures in China, suiting up for the bobsled in the Winter Games.

And on Saturday night in Yanqing, she found herself with a silver medal around her neck, standing on a podium with her teammate and bobsled pilot, Mariama Jamanka.

She joins a long line of sprinters turned bobsledders, runners whose explosive speed and strength on the track can translate to the ice. But this summer-to-winter Olympic whiplash was extreme. The Tokyo Olympics were postponed a year because of the coronavirus pandemic and held in July and August 2021, six months before the start of the Beijing Games. Burghardt is one of the few athletes who competed in both — two Olympics in less than a year.

For Burghardt, the turnaround was even more disorienting, given that she hadn’t even thought about competing in a Winter Games until September.

The German bobsled federation had long courted Burghardt, 27, one of Germany’s fastest sprinters, hoping she could be the latest track star to push a bobsledding team to a gold medal. “We all knew her,” said Rene Spies, the head coach of the German bobsled team.

She politely declined for years. “Oh yeah, the German bobsled federation has wished for it for a long time,” Burghardt said. “I’m pretty tall and fast and that’s exactly what they need for a good brakewoman, but I wanted to get on with my actual sport first and try to reach my full potential before starting on a new adventure.” 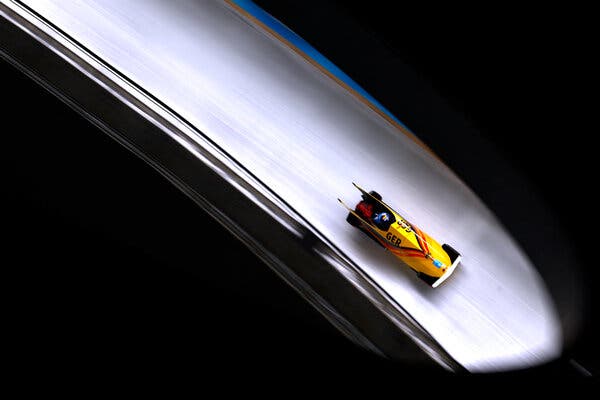 Burghardt and Mariama Jamanka of Germany in action on Thursday.Credit…Thomas Peter/Reuters

After suffering from setbacks and injuries through much of her career, she did reach a new level in the past year. She made the German Olympic team and clocked her fastest 100-meter time in the month before the Tokyo Games: 11.01 seconds.

In Tokyo, she ran in the women’s 4×100-meter final, in which the Germans placed fifth. She also advanced to the semifinals of the 100 meters with a time of 11.07 seconds.

“Tokyo was already a childhood dream come true,” Burghardt said. “Then there was this opportunity with Beijing, and I wanted to give it a try, and now we’re here.”

Burghardt’s progression from giving it a try to making an Olympic team was particularly swift. Kaysha Love, another sprinter turned bobsledder who took the fast track to these Games, had at least touched a bobsled before last year.

Burghardt in the first heat of the two-woman bobsled competition at the Winter Games.Credit…Mark Schiefelbein/Associated Press
Burghardt, to the right in yellow, racing in the women’s 100 meter qualifying round at the Tokyo Olympics. She made it to the finals.Credit…Alexandra Garcia/The New York Times

In 2018, a sliding coach reached out to Love’s track coach at the University of Nevada-Las Vegas expressing interest. Her first time in a bobsled was in November 2020. The experience was terrifying, she said, but it cemented a goal: She would make the Olympic team. She finished her track season and turned her full attention to bobsledding in July 2021.

“The end goal was always going to be the Olympics,” Love said. “I knew I was decent, at best. I knew I had a lot of work to do, but I wasn’t scared to put in the extra effort.”

Now she’s very much in. She was selected as a brakewoman for the U.S. Olympic team and finished in seventh place with Kaillie Humphries, the monobob gold medalist. Love already has ambitions to learn to pilot a sled after the Games.

Burghardt was more skeptical at the start, agreeing to train for bobsled only if she could continue to work with her sprinting coach and get back to the track full time as soon as she left China.

But she liked bobsledding from her first run — a promising sign for Spies, the German coach, who said many athletes get sick on their first run from the combination of speed and pressure. Burghardt’s technique wasn’t great, he said, but she managed to improve on her next run. She was added to the World Cup lineup two days later.

“I didn’t really have the time to come down,” Burghardt said of the quick transition. “I’m just riding on this cloud.”

Her development was so impressive that she was paired with Jamanka, the 2018 defending gold medalist.

The partnership worked out quite well. They were outrun only by Laura Nolte and Deborah Levi, also of Germany, who won the gold medal in two-woman bobsled. Elena Meyers Taylor of the United States added a fifth Olympic medal to her collection, finishing with a bronze with her teammate, Syliva Hoffman.

Burghardt is already debating whether to race in a German indoor track meet a week after these Olympics. She is also looking forward to getting back on track with her coach in Switzerland in March, and then training camp in April. Then, she said excitedly, the season starts in May.

“It’s a very big year for track also, with the World Championships and the European Championship,” she said.