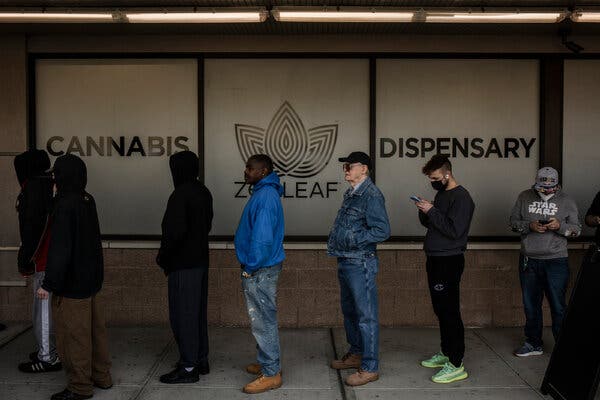 This is why Daniel Garcia was standing in a line outside a store at 3:30 a.m. on Thursday.

“I’m very picky when it comes to my weed,” he said, “and sometimes I ask my guy, ‘Which one is good?’ and it’s not always accurate. I like coming to dispensaries because I know for sure that what they’re telling me is accurate.”

Garcia, who is 23 and previously bought his marijuana from a dealer, was the first person in the line at Rise Paterson, a gleaming marijuana dispensary in New Jersey. When it finally opened two and a half hours later — on the first day of legal recreational cannabis sales in the state — he made one of the first legal purchases of marijuana in the New York region. His choice, for $60, was a half ounce of a potent strain called Banana Cream.

New Jersey is one of at least 18 states that have legalized recreational marijuana. New York is also among them and is set to begin sales later in the year. Supporters say that bringing marijuana purchases out of the shadows will create new jobs and bring in tax revenue — $30 million for the 2022 fiscal year and $121 million for 2023, according to earlier estimates from Gov. Philip Murphy of New Jersey, who went to a dispensary in Elizabeth on Thursday.

Greg DeLucia, a media executive, waited patiently for a dispensary in Bloomfield, N.J., to open. He said he used to buy his marijuana in sketchier settings.

“My dealer,” he said, “was a guy with four teeth named Bubbles.”

The dispensary was a far cry from Bubbles the dealer. Greeters handed out pastries from a food truck in the parking lot. A steel drummer played pop hits, and Ben Kovler — the founder and chief executive of Green Thumb Industries, which operates the store, Rise Bloomfield, and several others in New Jersey — sounded approvingly mellow.

“The entire country has too much anxiety,” he said. “So the demand and the appeal of this product is universal because well-being is something we all want.”

Enjoy a sunny day near the high 60s, with wind gusts and temps dropping to the high 40s at night.

She picks trees. Lots of trees.

Maple trees for the Bronx? Lilacs for Brooklyn? Maureen Clancy decides what trees go where.

She has a long job title — procurement forester for the New York City Department of Parks and Recreation. She is responsible for choosing thousands of trees that are planted on sidewalks and in parks.

She will be responsible for picking far more trees if Mayor Eric Adams commits to planting another million trees by 2030. The five borough presidents pressed him to take the first step in February, calling for the revival of the MillionTreesNYC program that began in 2007 when Michael Bloomberg was mayor.

To find trees for the city, Clancy goes on scouting missions as far away as Maryland — “nurseries are my second home,” she said. Back in the city, she calculates how much space is needed for each type of tree, coordinating with utility companies and city agencies to make sure there is room above and below ground. But that is not all.

“I think about how much shade a particular tree can provide 40 years out,” she said. “So a lot of thought and planning goes into picking the right tree for a particular street and neighborhood.”

A runner looks back and forward

In a conversation with the runner Cheryl Toussaint, something went unmentioned — the 50th anniversary of the day when she won a silver medal in the 1,600-meter relay at the Olympics. She was talking about the future — the 260 finalists who will compete in the Colgate Women’s Games on Sunday at Icahn Stadium on Randalls Island — and it was hard not to wonder if Toussaint saw something of herself in them.

She went from competitor in the 1970s to assistant meet director in 1999 to meet director in 2014, and now she is presiding over an outdoor event. The Colgate games, which began indoors in the 1970s, moved outside this year after skipping last year because of the pandemic, and Toussaint had been impressed by what she saw at the recent semifinals.

“The level of competition has been amazing for this early in the season,” she said. “We’re sort of standing with our jaws dropped at just how much they’ve been able to do in this short period of time. Indoor season only ended in March.” Coming out of the semifinals, only five points separate the leaders in the 400-meters in the high school division — Anissa Moore from Brooklyn and Avery Lewis from Wynnewood, Pa.

In all, about 2,000 athletes competed this year in the Colgate Women’s Games, sponsored by Colgate-Palmolive. For the students there are scholarship awards of as much as $1,000 in each event.

The Colgate games were the brainchild of Fred Thompson, a former track star at the City College of New York, whom Toussaint had first encountered at a Brooklyn track club he had started in the 1960s. She stopped by when she was 13, wearing a dress and sandals, and was so intrigued that she changed into running clothes, entered a 100-meter race and finished fourth.

“I walked over to Coach Thompson, he sort of looked me up and down and he said, ‘Sure, come out, we practice on Monday,’” she recalled. “And in that moment, my life changed. My life changed because I was now part of an organized sports activity that had goals beyond what I had for myself.

“This whole program, it never gets old,” she said. “It never gets old because every day we have the event is a day when someone walks through the door and realizes something about herself.”

It was my birthday, and a milestone one at that.

With celebratory calls filling my head and heart with the happiness of best wishes, I forgot to register for my life drawing workshop the next day. Attendance was limited to the first 13 people who replied to a 5 p.m. email, and the class was full by the time I remembered to reply.

Later that evening, I called a neighbor who is also a workshop regular to say I wouldn’t be joining her the next day.

She had also missed the email after mistakenly setting her reminder alarm for 5:30 p.m. I told her my excuse: that I had been distracted because it was my birthday. She suggested we go out to dinner to celebrate.

We went to an Italian place in our Upper West Side neighborhood. My neighbor mentioned to our waiter that it was my birthday.

He asked if we would like dessert. We declined and asked for the check.

He returned with a surprise: chocolate mousse with a lit candle. He apologized for not singing “Happy Birthday,” saying he had a “not-so-great” singing voice.

That was fine with me, as I hated the attention anyway.

A woman at the next table, overhearing the waiter, suggested that her companion, an opera singer, could do the honors.

And so she did, performing a beautiful soprano rendition of “Happy Birthday” to me, the rest of the restaurant and, possibly, anyone walking by outside.

We all but gave her a standing ovation.

Melissa Guerrero, Olivia Parker and Ed Shanahan contributed to New York Today. You can reach the team at nytoday@nytimes.com.

Tags
Day Out She That Who

His Gym Made a Harlem Park Special. City Officials Tore It Down.

A Look Inside the Textbooks That Florida Rejected