LYSYCHANSK, Ukraine — Just to move about town, Ukrainian soldiers accelerate to breakneck speeds in their SUVs, screech around corners, zip into courtyards, then pile out and run for cover.

“They see us and they open fire,” Colonel Yuriy Vashchuk said of the need to move quickly or become a vulnerable target for Russian artillery. “There’s no place in this town that is safe.”

He was careering around on the high ground of Lysychansk, across the river from Sievierodonetsk, the site of the fiercest fighting in Ukraine’s East. To be prepared, he placed a hand grenade in the cup holder between the front seats of his vehicle. A box of pistol ammunition slid back and forth on the dashboard as he drove.

Signs of Ukraine’s tenuous military positions are everywhere: On the hills overlooking Sievierodonetsk, smoke from a dozen or so fires testify to weeks of seesaw urban combat. The single supply route to the west is littered with burned vehicles, hit by Russian artillery.

The clanging, metallic explosions of incoming shells ring out every few minutes.

These two cities, separated by the Seversky Donets River, have become the focal point of the battle in the East, though weeks of bombardment have driven away most civilians, and President Volodymyr Zelensky of Ukraine recently referred to them as “dead cities.’’ 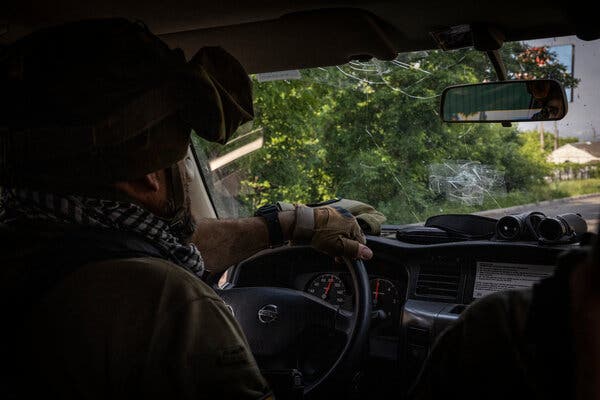 Ukrainian regional police patrolled in the city of Lysychansk, on the high banks across from Sievierodonetsk.

Smoke filled the sky over the the city of Sievierodonetsk, where intense street fighting is taking place between Ukrainian and Russian forces.

Russia’s goal is clear: It aims to capture the cities, even if that means flattening them, and continue its march westward.

Yet Ukraine’s strategy there remains unclear.Analysts say Sievierodonetsk, with its empty streets and hollowed-out buildings, is of limited military significance, and in recent days, Mr. Zelensky has spoken both of the merits of pulling back and the longer-term risks of doing so.

On Wednesday night, he swung back toward emphasizing its importance, framing the fighting here as pivotal to the broader battle for the region. “In many ways, the fate of our Donbas is being decided there,” he said in his nightly speech to the nation.

“We defend our positions, inflict significant losses on the enemy,” Mr. Zelensky said. “This is a very fierce battle, very difficult. Probably one of the most difficult throughout this war.”

Still, the government’s mixed signals emerged again on Thursday when Oleksiy Reznikov, Ukraine’s defense minister, made a desperate plea for more powerful weapons. “We have proved that, unlike many others, we do not fear the Kremlin,’’ he said. “But as a country we cannot afford to be losing our best sons and daughters.”

He warned that as many as 100 Ukrainian soldiers were being killed every day.

Indeed, the fighting on the plains in eastern Ukraine has become a race between Russia’s tactic of making slow, methodical advances that gain ground even as they reduce towns to rubble and kill untold numbers, and the delivery — far too slow, Ukrainians say — of powerful Western weapons needed to halt the invaders.

The Ukrainian military and government are now making no secret of the challenges they face in the East, three and a half months after Russia invaded. Their daily updates that highlight real setbacks are atypically honest by the standards of military press offices, a tactic perhaps intended to add a sense of urgency to their daily calls for heavy Western weaponry

Russia has also been moving swiftly to punish Ukrainian soldiers captured on the battlefield.

On Thursday, two Britons and a Moroccan who fought for the Ukrainian military were sentenced to death by a court in a Russian-occupied region of eastern Ukraine, after they were accused of being mercenaries, Russia’s Interfax news agency reported.

The death sentences for the men — Aiden Aslin, 28, and Shaun Pinner, 48, of Britain and Saadoun Brahim of Morocco — alarmed human rights advocates and raised questions about the protections for thousands of foreign-born fighters serving in Ukraine, some of whom have been taken prisoner.

In Russia, investigators said on Thursday that they had opened 1,100 cases of potential “crimes against peace” committed by captured Ukrainian service members, possibly paving the way for a mass show trial.

The fighting in Sievierodonetsk has come down to bloody, block-by-block combat, though a senior Ukrainian official, Oleksiy Arestovych, an adviser to Mr. Zelensky, suggested Thursday that Russia may have partially withdrawn to clear the battlefield for further artillery bombardments.

Sievierodonetsk lies on the mostly flat, eastern bank of the river and the Ukrainian forces’ sole supply line is a partially obstructed bridge. Two other bridges were blown up earlier in the fighting. On the river floodplain below one of the ruined bridges lies the upside-down wreck of a truck that plunged when the span was destroyed.

On the high, western bank is the city of Lysychansk. The two cities form a single metropolitan area, separated only by the river. Lysychansk, on the high bank, is seen as a more defensible fallback position for the Ukrainians fighting in this area.

In Lysychansk, asphalt chunks, sheared-off tree branches and other debris from shelling litter the city’s streets, which were otherwise mostly empty on a visit this week. Broken power lines droop from poles. At one spot, an unexploded Russian rocket juts out of a sidewalk.

Across the river, the streets in Sievierodonetsk were at moments eerily quiet, at other times a cacophony of gunshots and explosions.

The battle for Sievierodonetsk. As vicious street-by-street combat continues in the eastern city, President Volodymyr Zelensky of Ukraine has described the battle for its control as a crucial moment in the war. Last week, Ukrainian forces appeared to withdraw from Sievierodonetsk, only to later mount a counterattack.

Prisoners of war. Russian investigators said they had opened more than 1,100 cases into “crimes against peace” committed by the Ukrainian government, paving the way for what could turn into a mass show trial of hundreds of Ukrainian service members. Two Britons and a Moroccan who had fought for the Ukrainian armed forces, meanwhile, were sentenced to death by a court in Russia-occupied eastern Ukraine after being accused of being mercenaries.

Power consolidation. As Russia continues to pound towns and villages across eastern Ukraine, the Kremlin is trying to deepen its hold on occupied territory in the south, restoring rail links and other key infrastructure to secure a “land bridge” from Russia to the Crimean Peninsula.

E.U. membership for Ukraine. Ukraine’s prime minister said that the European Parliament recommended that Ukraine be granted candidate status for membership in the European Union. The E.U.’s decision on Ukraine’s candidacy, which is expected in late June, will put to the test the bloc as it tries to figure out ways to bind vulnerable countries like Ukraine, Moldova and Georgia to Europe without creating security risks.

Rapid fire from the large-caliber guns on armored personnel carriers, sounding like a jackhammer at work, echoed around the area.

A few miles to the west, another battle is raging across a pastoral landscape of rolling steppe and small villages, as Russian forces try to cut supply lines, surround the two cities and trap the Ukrainian fighters there. The two armies continually fire artillery at each other, with the Russians getting the upper hand for now.

A maze of rural back roads is now the only route in for the Ukrainians, and it is vulnerable to Russian artillery. In a field a few hundred yards off a road on Wednesday, a Ukrainian military vehicle burned and sent up a plume of black smoke.

“They are trying to make a circle, to trap all soldiers inside and destroy them,” said Mariana Bezugla, the deputy head of the Security, Defense and Intelligence Committee in Ukraine’s Parliament.

Ukrainian forces firing a salvo of rockets towards Russian positions near Sievierodonetsk last week.
Destroyed vehicles sat next to a large bomb crater last week in the largely deserted town of Siversk, around 20 miles from Sievierodonetsk.

The military does not disclose troop numbers, but Ms. Bezugla said several thousand Ukrainian soldiers are now deployed in the area at risk of being surrounded.

Ms. Bezugla wears a military uniform and gold-tinted aviator glasses while driving about in a van once used as an armored vehicle for a bank. She has been living in the potential encirclement zone for the past two weeks, she said, working to ensure that military aid to Ukraine is not misused. That issue is likely to rise in importance as billions of dollars in Western aid arrives.

That weaponry is flowing in, but not reaching the front quickly. Poland has promised tanks and armored vehicles, according to the Polish government. Norway has sent self-propelled howitzers, along with spare parts and ammunition. The United States and allies sent towed howitzers. And earlier this month, the United States and Britain promised advanced, mobile, multi-rocket launchers, what the Ukrainian military has said it needs to hit Russian targets far from the front.

But it’s unclear how much of it has arrived in the places it is most needed, and whether it will be enough.

“I cannot say that I am satisfied with the tempo and quantity of weapon supplies. Absolutely not,” said Mr. Reznikov, the minister of defense. “But at the same time, I am extremely ​grateful to the countries that support us.”

Civilians who had remained in the city were living in the basement of an apartment block in Lysychansk.
Fires burned at the Lysychansk oil refinery.

Ms. Bezugla said she was also thankful. “But for me, it’s hard to understand why help is given in doses, just enough to survive but not enough to win,” she said. “It worries me. Our people are dying every day here.”

Out in a field of green wheat shoots, one sign of the need for additional American military aid was the blown-up debris of earlier assistance. An American M777 howitzer had lost an artillery duel; it was blasted into several blackened, charred pieces amid craters from Russian artillery.

A destroyed, American-made M777 howitzer in a field outside the city of Lysychansk on Wednesday.