What’s going on with our galaxy?

Astronomers have long suspected that 26,000 light-years away in the constellation Sagittarius, lurking behind the clouds of dust and gas that shroud the center of the Milky Way, there is a massive black hole. Into this darkness, the equivalent of millions of stars have been dispatched to eternity, leaving a ghostly gravitational field and violently twisted space-time. Nobody knows where the door leads or what, if anything, is on the other side.

Humanity is now poised to get its most intimate look at this mayhem. For the last decade, an international team of more than 300 astronomers has been training the Event Horizon Telescope, a globe-spanning network of radio observatories, on Sagittarius A* (pronounced A-star), a faint source of radio waves — the presumed black hole — at the center of our galaxy. On Thursday at 9 a.m. Eastern time, the team, led by Sheperd Doeleman, an astronomer at the Harvard-Smithsonian Center for Astrophysics, will release its latest results in six simultaneous news conferences in Washington, and around the world.

The team is resolute in not speaking to news media. But in April 2019, the same group stunned the world by producing the first picture of a black hole — a supermassive torus of energy in the galaxy Messier 87, or M87, that surrounds emptiness.

“We have seen what we thought was unseeable,” Dr. Doeleman said at the time. That image is now enshrined in the Museum of Modern Art in New York.

The uninformed betting is that the team has now managed to produce an image of Sagittarius A*, our very own doughnut of doom. If Dr. Sheperd’s team has once again seen the “unseeable,” the achievement would reveal a great deal about how the galaxy works and what unfolds in its dim recesses. It also could augur well for the next step in its effort. Dr. Doeleman and his colleagues are planning to add more antennas to the Event Horizon Telescope network and to produce a movie of the Sagittarius black hole. The world is ready, he likes to say, for black-hole cinema.

Black holes were an unwelcome consequence of Albert Einstein’s general theory of relativity, which attributes gravity to the warping of space and time by matter and energy, much as a mattress sags under a sleeper.

Einstein’s insight led to a new conception of the cosmos, in which space-time could quiver, bend, rip, expand, swirl and even disappear forever into the maw of a black hole, an entity with gravity so strong that not even light could escape it.

Einstein disapproved of this idea, but the universe is now known to be speckled with black holes. Many are the remains of dead stars that collapsed inward on themselves and just kept going.

But there seems to be a black hole at the center of nearly every galaxy, ours included, that can be millions or billions of times as massive than our sun. Astronomers still do not understand how these supermassive black holes have grown so big.

Paradoxically, despite their ability to swallow light, black holes are the most luminous objects in the universe. Materials — gas, dust, shredded stars — that fall into a black hole are heated to millions of degrees in a dense maelstrom of electromagnetic fields. Most of that matter falls into the black hole, but some is squirted out by enormous pressures and magnetic fields.

Such fireworks, which can outshine galaxies by a thousandfold, can be seen across the universe; when first observed in the early 1960s, they were called quasars. Their discovery led physicists and astronomers to take seriously the notion that black holes existed.

What gave rise to such behemoths of nothingness is a mystery. Dense wrinkles in the primordial energies of the Big Bang? Monster runaway stars that collapsed and consumed their surroundings in the dawning years of the universe?

The center of the Milky Way coincides with a faint source of radio noise called Sagittarius A*. Astronomers including Andrea Ghez of the University of California, Los Angeles and Reinhard Genzel of the Max Planck Institute for Extraterrestrial Physics have calculated that whatever is there has the mass of 4.14 million suns. They gained that estimate by tracking the orbits of stars and gas clouds swirling about the center of the Milky Way and measuring their velocities at one-third the speed of light. For their achievement, Dr. Genzel and Dr. Ghez won the Nobel Prize in Physics in 2020.

If this is not a black hole, neither Einstein nor anyone else knows what it could be. 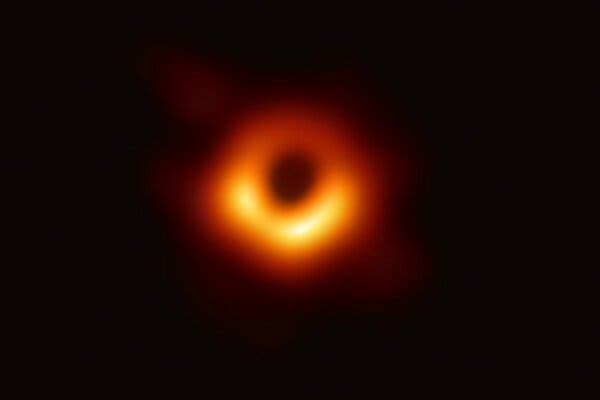 The Event Horizon Telescope team scored its first triumph in April 2019, when it presented a picture of the M87 black hole.Credit…EHT Collaboration

Proving that it is a black hole is another job entirely.

According to research that goes back to a 1967 paper by the physicist James Bardeen, the Sagittarius black hole, if it were there, should appear as a ghostly dark circle amid a haze of radio waves. At 50 million miles across, this hollow shadow would appear about as big from Earth as an orange on the moon.

Astronomers have been trying to sharpen the acuity of their telescopes to resolve the shadow of that orange. But ionized electrons and protons in interstellar space scatter the radio waves into a blur that obscures details of the source. “It’s like looking through shower glass,” Dr. Doeleman said recently.

To see deeper into the black hole shadow, researchers needed to be able to tune their radio telescopes to shorter wavelengths that could penetrate the haze. And they needed a bigger telescope.

In 2009, Dr. Doeleman and his colleagues formed the Event Horizon Telescope, an international collaboration that now comprises more than 300 astronomers from 13 institutions. Today, it employs 11 different radio telescopes around the world, which act in concert to form a telescope as big as the globe, as Dr. Doeleman likes to say.

The telescope is named after the point of no return around a black hole. The team scored its first triumph in April 2019, when it presented a picture of the M87 black hole. In 2021, team members refined their data to reveal magnetic fields swirling around the black hole like a finely grooved rifle barrel pumping matter and energy into the void.

Sagittarius A*, the black hole in the Milky Way galaxy, is a harder target. It is less than one-thousandth the mass and size of the M87 hole and, therefore, evolves a thousand times faster. The M87 black hole barely budges during a weeklong observing run, but Sagittarius A* changes its appearance as often as every five minutes. The challenge for black-hole cinema will be to separate what changes from what stays the same — to delineate the underlying structure of the black hole from the matter that is moving around in it.

The results could be spectacular and informative, said Janna Levin, a gravitational theorist at Barnard College of Columbia University, who was not part of the project. “I’m not bored with pictures of black holes yet,” she said.

Sync your calendar with the solar system

Never miss an eclipse, a meteor shower, a rocket launch or any other astronomical and space event that’s out of this world.

A guide to the spacecraft beyond Earth’s orbit.

Your Friday Briefing: The Fateful Bullet

Russian forces are attempting another crossing of a river where they suffered a major blow, Ukraine’s military says.

Demanding Reparations, and Ending Up in Exile

Baz Luhrmann Is Ready for Rhinestones, Cadillacs, Dr. Feelgood and a Svengali

In South Korea, Biden Moves to Shore Up Alliance