TONACATEPEQUE, El Salvador — It has been four weeks since the shoemaker vanished from his hometown, hauled away in handcuffs by Salvadoran police.

The family of the man, Heber Peña, 29, has gathered business receipts and signatures from clients to prove he makes his money honestly. They fear he is now stuck in an overcrowded prison, accused of being a gang member.

Even so, the cobbler’s family still sees the benefits of the police crackdown that led to his arrest — and admires the leader behind it.

“Apart from this,” said Caleb Peña, Heber’s brother, “everything the president has done is magnificent.”

Mr. Peña is one of more than 18,000 Salvadorans imprisoned in recent weeks, after a spike in killings in March led the government to declare a state of emergency, suspending key civil liberties guaranteed in the Constitution and allowing children as young as 12 to be tried as adults for gang affiliation.

But most Salvadorans are not complaining. The country has grown weary of endless bloodshed, of the gangs that terrorize them, of the lawlessness that has inspired so many to travel more than 1,000 miles to the American border.

Much of the Salvadoran public is simply relieved that their leader is cracking down, even if he is also undermining the fragile democracy their country has struggled to build over the last three decades. 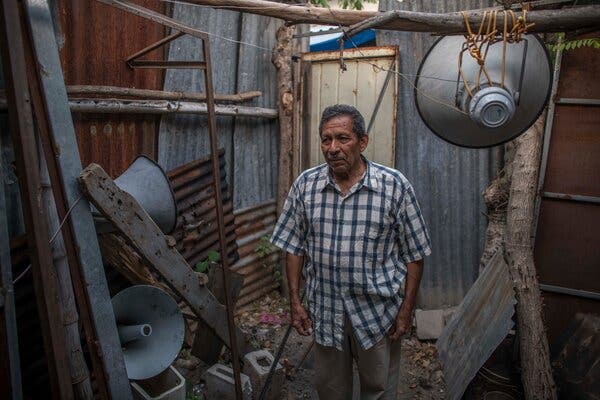 Victor Manuel Peña, 70, the father of Heber Peña, 29, who was arrested after the police broke into their home.

Heber’s brother Caleb holding the shoes Heber was making when he was arrested.

The end of a brutal civil war in 1992 ushered in a new force of lawlessness in El Salvador, the smallest country in Central America: gangs that took hold after the United States deported thousands of Salvadorans back to the country, many of whom had built criminal networks in Los Angeles.

The gangs fueled a cycle of bloodshed that deepened frustration with a political system that could not deliver lasting peace. Now many Salvadorans have embraced a young leader with an authoritarian bent who, at least temporarily, has given them the stability that has proved elusive.

Nayib Bukele, the 40-year-old Salvadoran president, has become one of the world’s most popular leaders. His supporters say that’s largely because of the swift decline in gang violence since he assumed office in 2019, as well as his management of the pandemic, during which he kept many afloat with food handouts.

Analysts and U.S. government officials believe that violence has only diminished because of a secret truce between gangs and the government, something Mr. Bukele denies.

And critics have grown alarmed at the president’s systematic efforts to subvert the country’s brittle institutions and consolidate ever more power into his own hands.

His party summarily removed five Supreme Court judges and dismissed an attorney general who was investigating the administration, while relentlessly attacking the media and advocacy groups.

Yet most Salvadorans don’t seem to feel they’re being repressed — or just don’t care. Satisfaction with democracy in El Salvador is at its highest level in more than a decade, an August survey by Vanderbilt University showed. And a CID-Gallup poll released last week showed that 91 percent of those surveyed approved of the government’s security measures.

“For many people in El Salvador, democracy is basically the ability of the political system to respond to their plight,” said José Miguel Cruz, an expert on El Salvador at Florida International University. “By that standard, they see this as the best option they have.”

Fear over arbitrary arrests has spread across the country, according to interviews with dozens of residents and police officers in towns now controlled by security forces. But many remain convinced that it’s perfectly legitimate for the government to go to extreme lengths to crush the gangs that torment them.

The Salvadoran army searches everyone who enters or exits from a gang-controlled neighborhood in Tonacatepeque.
Fear over arbitrary arrests has spread across the country, according to interviews with dozens of residents and police officers in towns now controlled by security forces

Indeed, long before Mr. Bukele declared a state of emergency, basic freedoms were already sharply limited in much of the country. The only difference is that in the past, it wasn’t the government calling the shots. It was the gangs.

In many of El Salvador’s poorest towns, gangs are the ultimate authority. They decide who can enter and at what time, which entrepreneurs can open a business and how much of a kickback they owe, who lives, and for how long.

“In these communities, people have already been under a state of emergency,” said Edwin Segura, the head of an investigative unit at La Prensa Gráfica, a prominent Salvadoran newspaper. “People say, ‘well, if I am going from being in the authoritarian and homicidal hands of the gang to being in the authoritarian hands of the state, I’ll take it.’”

Mr. Peña grew up and lived in a town north of San Salvador, the capital, called “Distrito Italia,” or the Italian District, which got its name after Italy donated the funds to build the community for people displaced after a major 1986 earthquake. It has become a stronghold of the Mara Salvatrucha, or MS-13, which until the state of emergency, ruled over every aspect of life.

Residents and current and former police officers say the gang taxed many local businesses and anyone from the outside who came to deliver products. Lookouts reported on who entered the town, warning higher-ups in the gang when strangers or the police approached.

The gangs even stepped in to quell disputes among spouses or neighbors, imposing their own brand of law and order.

“If you get in a fight with your neighbor, you go to the people taking care of these places, not the police,” said a man named Rogelio, whose full name is being withheld to protect him from potential reprisals.

Once, he said, a group of gang members beat him bloody because he uttered a word they didn’t like. A few years ago, while Rogelio watched, they shot his best friend dead, because the man seemed “too quiet” to them.

“If I was the government, if I had power, I would make them disappear,” Rogelio said, referring to gang members. “They do not deserve to live.”

Maritza Henriquez de Menjivar, 49, the mother of Joel Alexander Menjivar, who was arrested while was working in March.
Ms. Menjivar showing a picture of her son while giving him a birthday gift.

But any agreement appeared to break down in late March, when a weekend of murders pierced the veneer of tranquillity, and now Mr. Bukele seems to be confronting the gangs head on.

Since El Salvador’s Parliament first approved the emergency decree, soldiers have been stationed at the Italian District’s entryway, inspecting every vehicle and checking visitors’ bodies for tattoos that could signal gang ties.

Many residents say they feel safer now, including Rogelio, who said those who criticize Mr. Bukele’s treatment of gang members have no idea what it’s like to be subjugated by them every day.

“They’re just talking,” he said of the president’s detractors, “we are here living this.”

Mr. Bukele has made a point of broadcasting his crackdown on social media, boasting of denying prisoners sunlight and rationing their food. On Twitter, he has posted videos of prison guards pushing tattooed men to the ground and inmates being served tiny meal portions.

Such public displays of cruelty seem designed to win political points. A 2017 poll found that more than a third of Salvadorans approved of using torture and extrajudicial killings in the fight against gangs.

A military checkpoint at the San José del Pino neighborhood in San Salvador, the capital.
The neighborhood is largely controlled by MS-13.

“It has to be a cathartic image,” said Mr. Segura, “to see gang members lying on the ground after seeing them emboldened, humiliating and terrorizing others.”

Mr. Bukele himself concedes that the government has thrown innocent bystanders into prison, though he maintains that they represent a tiny percentage of detentions. Marvin Reyes, who leads a police union, says officers have been directed by their superiors to meet “a daily quota of arrests.” A spokesman for the president’s security cabinet declined to respond.

Many gang members have gone underground — fleeing to the mountains or hiding out in safe houses — so the police have met the demand for mass arrests by picking up anyone who looks suspicious, according to Mr. Reyes.

Like most everyone in the Italian District, the family of Mr. Peña, the shoemaker, dreams of a more peaceful life.

But they and many other residents insist that the young man has nothing to do with the gangs. When the police banged down his sheet metal door in March, he was in the midst of putting together a pair of black shoes.

“He was working right here,” said his father, Víctor Manuel Peña, gesturing toward a pile of unfinished sandals outside the two-room home he shares with Heber. “What gang member lives in a house with walls made of sheet metal?”

When his wife died of cancer a few years ago, Víctor Manuel, 70, took on the responsibility of cooking meals for the family. Now he has nightmares of his son wanting for food in prison.

He voted for Mr. Bukele, along with the rest of the family. “We saw he was interested in making the country better,” he said. “We never imagined he’d make mistakes like this.”

Heber’s father, Víctor Manuel Peña, in their home. The Peña family has gathered business receipts and signatures from clients to prove Heber makes his money honestly.
Tags
Sai̇d Salvador See That Who

Britain broke the law by moving hospital patients to nursing homes early in the pandemic, a court rules.