HOUSTON — In less than a week, Texas is set to execute Melissa Lucio, a mother of 14 who was convicted of murder in the death of her 2-year-old daughter more than a decade ago.

The execution would be the first of a Hispanic woman in Texas, and it has drawn widespread attention — from a 2020 documentary to a recent segment on “Last Week Tonight With John Oliver” — because of new evidence and expert testimony casting strong doubt about her guilt.

Ms. Lucio’s case has also done something rare in the intensely polarized political climate of Texas: It has brought Democratic and Republican lawmakers together in mutual outcry. Scores of legislators have called for clemency or at least a reprieve, including those who are ordinarily vigorous backers of the death penalty.

“It will be a historic, irreversible blunder on the part of the State of Texas if we go forward with this,” said State Representative Jeff Leach, a Republican from north of Dallas who has been a leading voice in Texas urging a halt to the execution. “I’ve never seen a more troubling case than the case of Melissa Lucio.”

Five of the jurors in her case have also come out in favor of clemency or a reprieve, citing in part the new evidence. “I voted to sentence Melissa Lucio to death. I was wrong,” one wrote in The Houston Chronicle.

The challenges to Ms. Lucio’s execution highlight familiar failings of the nation’s criminal justice system, including a confession given after hours of interrogation, evidence presented as scientific that has since been questioned, an inadequate defense and gender bias.

“Police targeted Melissa because she didn’t fit their image of how a grieving mother should behave” in the aftermath of her daughter’s death, said Sandra Babcock, one of Ms. Lucio’s lawyers and the director of the Cornell Center on the Death Penalty Worldwide.

Ms. Lucio’s daughter Mariah died at home. Her lawyers have said that Mariah went down for a nap and did not wake up and that, two days earlier, she had fallen down a flight of stairs. An autopsy said the cause of death was blunt force trauma to the head.

The fact that Ms. Lucio is on death row at all is an outlier. It is rare for prosecutors to seek the death penalty in a case where a mother has been charged with killing her children, her lawyers said.

State Representative Jeff Leach with Ms. Lucio during a visit by lawmakers to a prison unit in Gatesville, Texas.Credit…Texas state Rep. Jeff Leach, via Associated Press

One issue her lawyers are raising is the legal provision — unique to Texas — under which prosecutors must prove a person’s “future dangerousness” in order to secure a death sentence. Ms. Lucio did not have a history of acting violently before Mariah’s death, so prosecutors relied heavily on disciplinary records from her time behind bars after her arrest. Ms. Lucio’s lawyers have argued that the prosecution misrepresented those records and that she had not engaged in significant misconduct.

Ms. Lucio, who lived in the border city of Harlingen, struggled to provide for her large family. At the time of Mariah’s death, she was pregnant with twins and already had 12 children.

She had part-time work as a home health aide, her lawyers said, but struggled with drug addiction and often relied on soup kitchens for food. At one point, the family was homeless and living in a park. Child Protective Services took her children from her for a time because of neglect, but her lawyers said Ms. Lucio had no documented history of abusing her children.

At the time of Mariah’s death in 2007, Ms. Lucio lived with Mariah’s father, Robert Alvarez, and nine children; the family had just moved into a new apartment. The police interviewed both Mr. Alvarez and Ms. Lucio, but her lawyers said they approached Mr. Alvarez much differently, treating him more as a witness than a suspect. He was eventually convicted of a much lesser charge of causing injury to Mariah by omission — by failing to seek medical care for her — and sentenced to four years in prison.

In their interrogation immediately after Mariah’s death, the police accused Ms. Lucio of beating her daughter to death. Prosecutors pointed to bruises on Mariah’s body and an untreated broken arm as evidence of abuse.

But from the start, Ms. Lucio maintained her innocence, saying her daughter had fallen down a flight of stairs as the family was moving out of an apartment two days earlier. Her lawyers have presented expert testimony that the bruising could have been caused by her fall down the stairs, and that broken arms are not uncommon in young children prone to falls. Mariah had a medical history of falling, including at day care, and no record of prior bruises, the lawyers said.

Despite the growing support for Ms. Lucio, no formal action has been taken to halt or delay her execution, which is scheduled for Wednesday. The case is currently before the highest criminal court in Texas, and a request for clemency is being considered by the Texas Board of Pardons and Paroles. Asked about Ms. Lucio on Thursday, Gov. Greg Abbott said he would consider what action to take after the board had made its decision. 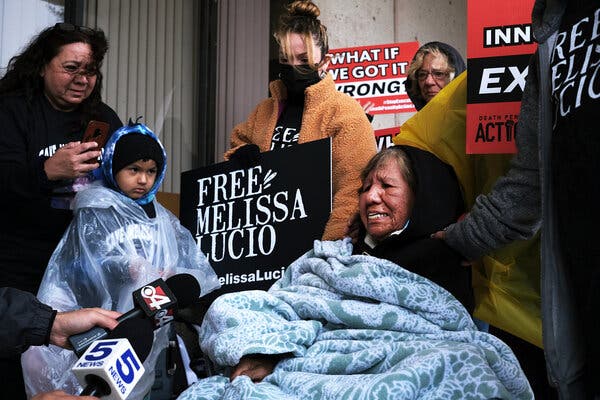 Ms. Lucio’s mother, Esperanza Treviño, pleaded to the public on the steps of the Cameron County Courthouse in Brownsville.Credit…Miguel Roberts/The Brownsville Herald, via Associated Press

During a hearing this month in the State Capitol, lawmakers repeatedly pressed the Cameron County district attorney, Luis V. Saenz, a Democrat, to withdraw the execution warrant — a move that would allow the defense more time to pursue a new trial. (The district attorney who prosecuted Ms. Lucio, Armando Villalobos, is serving a 13-year sentence for corruption unrelated to her case.)

“For me to sit here unilaterally and just pull the plug on it,” he told legislators, “then what do I say to the other 195 poor souls that are on death row right now, who by the way are also innocent?” His comment drew gasps and guffaws from those in the hearing room.

In their application for clemency to the Texas Board of Pardons and Paroles, lawyers for Ms. Lucio presented medical evidence explaining how the fall could have caused her death as well as the bruising on her body, saying it was not considered at trial. (Her trial defense did bring up the fall, but presented only one expert medical witness who testified about Mariah’s head injuries.) The lawyers, including those from the Innocence Project, also argued that the jury was not told of Mariah’s medical history, which included past falls.

Her lawyers have also challenged Ms. Lucio’s statements to the police in the immediate aftermath of Mariah’s death that were used against her, saying they had been obtained after five hours of coercive interrogation known to result in false confessions.

“How did you hit her?” a Texas Ranger asked.

“How would you hit her?” the ranger asked.

“I would just spank her,” she said.

Elsewhere, investigators suggested that Ms. Lucio abused Mariah and caused her death because she was simply a frustrated and overwhelmed mother, an idea that Ms. Lucio eventually appeared to adopt during the interrogation. “I was just frustrated,” she said.

“You see Ms. Lucio regurgitate the words that the investigators provide,” said David Thompson, the president of a law enforcement training company who reviewed footage of the interrogation for Ms. Lucio’s lawyers.

At one point, the camera recording the interrogation was switched off, according to her clemency application. After it was switched back on, around 3 a.m., the ranger questioning Ms. Lucio could be heard directing her to hit a doll in order to demonstrate the alleged abuse that led to Mariah’s death. She did so.

“I would say that it is an unreliable, involuntary, coerced compliant confession,” Mr. Thompson said in an interview.

But even as many conservatives in the State Legislature signed letters supporting Ms. Lucio, some faced pushback. Mr. Leach, in an appearance with the conservative podcast host Allie Beth Stuckey, spent nearly an hour debating the case.

“I don’t think it’s right to say that she is probably innocent,” Ms. Stuckey said, citing Ms. Lucio’s history of neglect, her confession and other evidence presented during her trial.

Mr. Leach stressed that he was not insisting on Ms. Lucio’s innocence but on her need for a new trial to consider the new evidence.

“There’s a lot of people on the right who are very supportive of the death penalty and just aren’t sure that Melissa should be saved,” said Lacey Hull, a Republican member of the Texas House. “I hope her case makes everyone take a much greater look at the death penalty in general and where we need to make changes.”

Ms. Hull visited Ms. Lucio this month as part of a group that included Mr. Leach and both Democratic and Republican members of the Legislature. They prayed together with Ms. Lucio.

“As someone who is pro-life, it is something that I take great issue with, that the state should be executing an innocent person,” Ms. Hull said. “If there is even a slight doubt of her guilt, she should not be executed.”

Tags
Sai̇d She Texas That Who

A Look Inside the Textbooks That Florida Rejected