CAMBRIDGE, Mass. — When Gang Chen returned to his laboratory at the Massachusetts Institute of Technology on Friday, the day after the government had dismissed charges of lying on grant applications, he was surrounded by well-wishers, offering hugs and congratulations.

There were invitations, too. Colleagues were asking him to join funded research studies, resuming the work that has occupied his adult life.

Dr. Chen studies heat transfer; he hopes to develop a superconductor that could convert heat from car exhaust into electricity, or fabric for clothing that could cool the body. During the year since his arrest, that had been the hardest thing, tearing himself away from research.

Dr. Chen said thank you, but no. After the experience of the last year — the early-morning arrest, the handcuffs and shackles, being described, in a news conference, as loyal to China — he is uncertain if he will ever feel safe applying for U.S. government funds for research again.

“You work hard, you have good output, you build a reputation,” Dr. Chen said, in a three-and-a-half-hour interview at his M.I.T. office, the first he has given about the case. “The government gets what they want, right? But in the end, you’re treated like a spy. That just breaks your heart. It breaks your confidence.”

Last week, the government dismissed the case against Dr. Chen, which alleged that he had concealed seven Chinese affiliations in applications for $2.7 million in grants from the U.S. Energy Department. Prosecutors announced that they had received new information indicating that Dr. Chen had not been obliged to disclose those affiliations, undercutting the basis of the case.

“We understand that our charging decisions deeply impact people’s lives,” said Rachael Rollins, who was sworn in this month as the new United States Attorney. “As United States Attorney, I will always encourage the prosecutors in our office to engage in this type of rigorous and continued review at every stage of a proceeding. Today’s dismissal is a result of that process.”

The dismissal is a setback to the China Initiative, an effort started in 2018 to crack down on economic and scientific espionage by China. Many of the prosecutions, like the case against Dr. Chen, do not allege espionage or theft of information, but something narrower: failing to disclose Chinese affiliations in grant applications to U.S. agencies. Critics say it has instilled a pervasive atmosphere of fear among scientists of Chinese descent.

Dr. Chen described the experience of the last year as traumatic and deeply disillusioning.

In recent months, prosecutors floated an agreement in which the government would have dropped the criminal charges in exchange for acknowledgment of some links to China, he said. He refused it, he said.

“That’s just my mentality,” he said. “I didn’t do anything wrong.”

The son of two mathematics teachers who were sent to teach on farms during China’s Cultural Revolution, Dr. Chen grew up without any hope of becoming a scientist. His parents, the descendants of landowners, had a “bad classification” from the Chinese government, and were viewed suspiciously. His father warned him he would probably spend his life as a farmer.

But then Mao Zedong died. Dr. Chen was one of the first classes of Chinese students to take standardized tests, and his scores vaulted him into an academic elite. He immigrated to the United States at 25, and became a naturalized citizen in 2000.

During his years at M.I.T., he added, he had often dissuaded scientists who were being recruited to take their research out of the United States. The prosecutions of scientists in the United States have shaken him so deeply, he said, that he isn’t sure he would do that again.

“I don’t know whether I could give the same advice,” he said. “I don’t know how this is going to develop. I think the country must wake up. We are killing ourselves. We are committing a real suicidal act, right? I really don’t know how to advise people now on this. Maybe give it some time. I don’t know. It’s hard to say.” 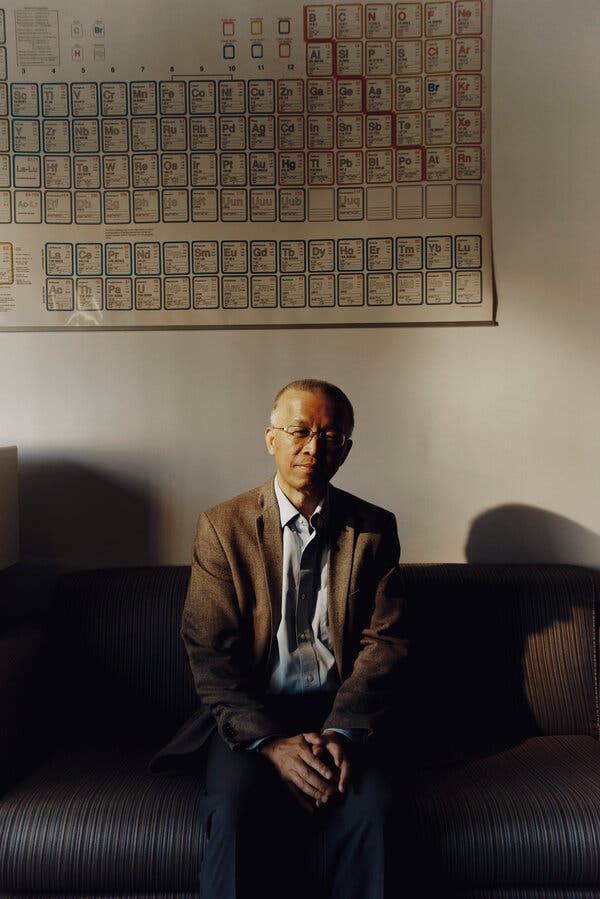 “There is nothing to congratulate,” Dr. Chen said in the first interview he has given about the case. “It’s just a sad history, sad for the country.”Credit…Tony Luong for The New York Times

By 2019, the Justice Department had begun to announce charges against scientists collaborating with Chinese institutions. Dr. Chen followed the cases casually, through friends and colleagues. He decided against taking a sabbatical year in China, for fear it would make him a target.

In January 2020, he was alarmed by the arrest of Charles M. Lieber, the head of Harvard’s chemistry department, who was charged with hiding his participation in China’s Thousand Talents recruitment program. But neither Dr. Chen nor his colleagues saw parallels with their own activities, he said.

“Most of us, when we looked at the government accusation, we said, ‘Wow, he did that?’” he said. “You see, you tend to believe in government.”

But he, too, was under investigation. That same month, Dr. Chen was detained for two or three hours at Logan International Airport as he returned from a trip to China, Egypt and Morocco. He answered questions from a Homeland Security agent, balking only at the end of the interview, when the agents for the passwords to his devices.

M.I.T. provided him an outside counsel, Robert Fisher, a former prosecutor who met with him eight times over the course of the next year. Still, Dr. Chen said, he had little concern that the investigation would result in anything.

At 6:30 a.m. on Jan. 14, 2021, he was making coffee when someone came to the door. He opened it to see between 10 and 20 federal agents. He was told to stand in a corner while agents went to wake his wife and daughter. When his wife saw that he was being handcuffed and led away, she began to speak to the F.B.I. agents, and he considered calling out to her, to tell her to stop, but was afraid to speak.

“I didn’t dare use Chinese — because I spoke with her in Mandarin, right, most of the time — but I didn’t dare to use Chinese,” he said. “I regret so much, once they took me away, because I should have shouted in Chinese to her, ‘Anything you say can be used against you.’”

Dr. Chen spent the next few hours in custody, pacing in his cell and then doing yoga. He remembers asking the F.B.I. agents whether they had been asked to make sure he did not commit suicide, and reassuring them that he did not intend to. When he was finally released, at around 2 p.m., and was in a car on the way home, he began shaking.

Dr. Chen, who has experimented with standup comedy, joked — half-joked — that the experience had so disgusted them that both he and his wife lost weight.

“We were both of us so disgusted,” he said. “We didn’t know what this word really meant. It’s real. Disgust is biological. We used to see this word, but it’s a biological reaction after everything that has happened.”

Understand the Case Against Gang Chen

Who is Gang Chen? He is a professor of mechanical engineering at the Massachusetts Institute of Technology who was arrested on Jan. 14, 2021, and charged with grant fraud. Born in China, he has been a naturalized U.S. citizen since 2000.

What were the accusations against him? Dr. Chen was accused of hiding his affiliations with Chinese government institutions in applications for $2.7 million in grants, failing to declare a Chinese bank account and making false statements to government officials. He pleaded not guilty to all the charges.

What is the China Initiative? It’s a government effort, initiated under the Trump administration, to stop scientists from passing sensitive technology to China. Dr. Chen was charged as part of the program, which has been widely criticized for singling out Chinese scientists and is currently under the Justice Department’s review.

What was the reaction to the case? Dr. Chen’s arrest was met with protest from many in academia, who said prosecutors had overreached, blurring the line between grant disclosure violations and more serious crimes like espionage or intellectual property theft.

What is the U.S. now seeking to drop the charges? Prosecutors submitted a motion to dismiss those charges on Jan. 20, 2022, stating that new information had emerged during their investigation and could no longer meet the “burden of proof at trial.” A judge is expected to rule on the motion soon.

Dr. Chen was put on paid leave, so he was not allowed on campus or to have contact with M.I.T. employees. He had five or six active research projects, and during the months that followed, they slowed and faltered. The 15 postdoctoral students he worked with were transferred to other research groups, taking their knowledge with them.

“We are all losers, right?” Dr. Chen said. “My reputation got ruined. My students, my post-docs, they changed their career. They changed to other groups. M.I.T., the country, the U.S., we lose. I can’t calculate the loss. That loss cannot be calculated.”

Last September, he got good news. Prosecutors had floated the idea of a deferred prosecution agreement, which would have allowed him to return to work and apply for government grants in the future. In return, said his lawyer, Mr. Fisher, he would have to admit to having some ties to China, none of them a violation of the law.

Such a deal, Mr. Fisher said, is “very, very rare,” and would have insulated Dr. Chen from the risk of going to trial, something he tried to impress on Dr. Chen.

“A lot of people would view that as a win,” he said. “I told him, ‘God, this is going to be crushing for me if we get a guilty at trial and I’m sitting with you in the courtroom.’”

Dr. Chen said he considered the deal seriously. But he feared that there would be lingering questions about his innocence, or that he would be asked to speak to prosecutors about his colleagues.

“I would never incriminate anybody,” he said. “And seeing how terribly they can stretch the facts, I have zero confidence in them. Absolute zero.”

When the government’s motion to dismiss charges was made public, last Thursday, Dr. Chen was inundated with congratulations from colleagues. But he was somber.

“It’s hard to tell them directly that there is nothing to congratulate,” he said. “It’s just a sad history, sad for the country.”

He is not certain how he will resume his scientific career. Without a research group or a funding stream, he has been working on individual research papers. On Thursday, the day the charges were dropped, he woke up at 4:30 a.m. to finish a paper on energy transfer in water.

But he said speaking out about the China Initiative felt like an obligation. In an editorial in the Boston Globe this week, Dr. Chen has called for Congress and the Justice Department to review his case and hold people involved in the prosecution accountable.

And for now, at least, he has no interest in research grants from the U.S. government.

“I am angry, I am afraid,” he said. “My love is science. I did not want politics, right? I saw that, and I got away from it. I do my devotion to science. I help people, I support. But I learned that you can’t get away. Politics impacts everybody. So if there are things that are not right, we all need to speak out.”

Tags
Chi̇na Had Research That Who

An Indian State Banned Alcohol. The Drinking Moved to Nearby Nepal.

A Town’s Covid Money Was Sent to One Man in Error. He Gambled It All Away.