MYKOLAIV, Ukraine — There is no door on Anna Svetlaya’s fridge. A Russian missile blew it off the other day. The detached door saved her, protecting her chest from shrapnel as she passed out in a pool of blood.

It was just before 7 a.m. in a residential district here in the southern Ukrainian port city of Mykolaiv when Ms. Svetlaya, 67, felt her world explode in a hail of metal shards, glass and debris as she prepared breakfast.

Her face a mosaic of cuts and bruises, her gaze dignified, Ms. Svetlaya said: “The Russians just don’t like us. We wish we knew why!” A retired nurse, she surveyed her small apartment, where her two sisters labored to restore order.

“It’s our ‘brother Russians’ who do this,” said one, Larisa Kryzhanovska. “I don’t even hate them, I just pity them.”

Since the war began, Russian forces have pummeled Mykolaiv, frustrated by their failure to capture it and advance west toward Odesa. But the city’s resistance has hardened.

Almost encircled in the first weeks of fighting, it has pushed back, becoming a linchpin of Ukrainian defiance on the southern front. But at regular intervals, with missiles and artillery, Russia reminds the 230,000 people still here that they are within range of the indiscriminate slaughter that characterizes Moscow’s prosecution of the war.

A Russian strike on Friday killed one person and injured 20, several of whom are still hospitalized. Mykolaiv is no longer under immediate threat of capture — a Ukrainian counter offensive in the south is unsettling Russian forces — but the war’s toll is evident. Once a summer tourist destination, a city with a lovely setting at the confluence of the Southern Buh and Ingul rivers, Mykolaiv has become ghostly. 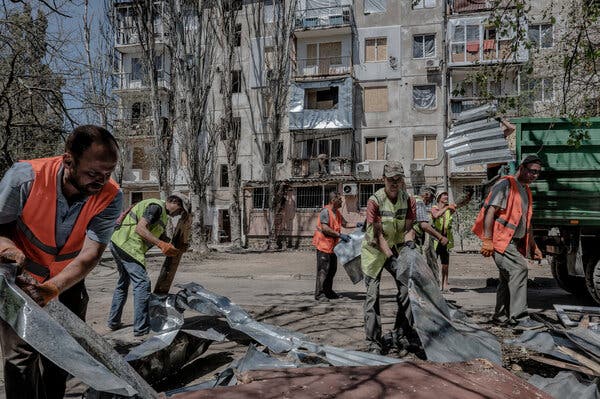 Clearing debris on Krylova Street, which was hit on Friday.

A paramilitary checkpoint in Koblevo, which was the largest and most popular resort area of Mykolaiv’s coast on the Black Sea before the war.
People lined up for food from a humanitarian aid group early Monday in Mykolaiv.

Weeds advance across sidewalks. Buildings are shuttered. Drinking water is in short supply. More than half the population has left; those who remain are almost all jobless. About 80 percent of people here, many of them old, rely on food and clothes from aid organizations. Every now and then another explosion electrifies the summer air, tipping people into desperation when it does not kill them.

Driven out of a nearby village, Natalia Holovenko, 59, was in a line to register for aid when she began sobbing. “We don’t have any Nazis here!” she said, a reference to Russian President Vladimir V. Putin’s false justification of the war as needed to “de-Nazify” Ukraine. “He just wants to kill us.”

In her imploring eyes the madness of this Russian project seemed etched.

Without the Black Sea coast, a landlocked rump Ukraine would be a nation undermined, its ports lost, eight years after Mr. Putin seized Crimea. A grain-exporting nation, albeit one now facing a Russian naval blockade, it would find its economy upended.

But as Russia advances mile by plodding mile in the Donbas region to the east, it has been held back in the south. Since their capture of Kherson, about 40 miles east of Mykolaiv, early in the war, Russian forces have stalled or been pushed back. Ukrainians, their resolve hardening, have retaken villages in the Kherson region.

“We will not give away the south to anyone, we will return everything that’s ours and the sea will be Ukrainian and safe,” President Volodymyr Zelensky declared after visiting Mykolaiv and Odesa last week. Iryna Vereshchuk, Ukraine’s deputy prime minister, said Tuesday that “our army will definitely de-occupy these lands.”

Certainly, Oleksandr Senkevych, the mayor of Mykolaiv, exudes confidence. A man in perpetual motion in green camouflage cargo pants, with a Glock pistol at his hip and an almost manic gleam in his blue eyes, he said “the next step is to move the Russians out of Kherson and then to move them out of Ukraine.”

Before that happens, however, Ukraine needs long-distance artillery, he said. Drawing on a paper place mat in a café, he illustrated how Russia could hit Mykolaiv, often with cluster munitions, from places Ukrainian artillery cannot reach.

“Right now, it’s frustrating,” he said. “When we have what we need, we will be able to attack them without big losses.”

The view at a harbor in Mykolaiv for the company Nibulon, which produces and exports wheat, barley and corn. It is the only agricultural company in Ukraine with its own fleet and shipyard.
Mayor Oleksandr Senkevych, 40, with Dr. Fedorenko Dmitriy, head of the emergency department at a hospital in Mykolaiv.
Victoriya Matseda, 26, and her three kids at a camp in Koblevo for displaced people. She escaped a month ago from Kherson.

That will almost certainly take many months.

The mayor’s wife and two children left at the start of the war. He works round the clock. Water is a major issue. The Russians destroyed pipes that conveyed fresh water from the Dnieper River. The water from new boreholes is insufficient, and water from the Southern Buh is briny.

“It’s a big problem,” he said. “But we are over-motivated, we know what we fight for, our children and grandchildren, and our land. They don’t know what they fight for and so they are under-motivated.”

He sees this as a war between cultures — in Russia, the leader says something “and the sheep follow,” he said, but in Ukraine, democracy has taken hold. In Mr. Putin’s Russia, everything said means the opposite: “protect” means “invade” and “military targets” means “civilians.” In Ukraine, Mr. Senkevych said, “we live in reality.”

That reality is hard. Anna Zamazeeva, the head of the Mykolaiv Regional Council, led me to her former office, a building with a gaping hole in its middle where a Russian cruise missile struck on March 29, killing dozens of her colleagues. A last-minute delay in getting to work saved her life.

“That was a turning point for me,” she said. “Every day the spouses and children of those killed watched the bodies and rubble being removed, and I could not persuade them to leave. It was then I fully realized the cruelty and inhumanity that the Russians were capable of.”

This was not an easy admission. Ms. Zamazeeva’s mother is Russian. Her husband, who has left Ukraine with their two children, was born in Russia. Her grandfather lives in St. Petersburg. These sorts of family connections, and other bonds, are common, giving the war a particular quality of rupture and severance that may tend to savagery, because the “other” is not so “other” and must be effaced.

“Now I cannot speak to my grandfather because this conflict is too deep in my heart,” Ms. Zamazeeva said. “On the first day of the war he sent a message to our family Viber group, asking how we were. I replied, ‘We are bombed, and so are your grandchildren.’ He replied, ‘Oh, it will be good. You will all be freed.’”

Anna Zamazeeva, the chair of Mykolaiv’s regional council, in front of the city’s regional administration building, which was hit by a missile on March 29.
At a hospital in Mykolaiv, an appreciation ceremony was held for doctors and nurses in the city and from the region.
Vlad Sorokin, 21, was on his way to visit a classmate when he was injured in a missile strike. He suffered broken arms and hips and a perforated liver, but he is now stable.

She deleted him from the family messaging group.

Alone, she has returned to her father’s home. She sleeps in the room where she slept as a child. The war, she estimates, will last at least another year. Her days are consumed with trying to get food, water and clothes to tens of thousands of people, many of them displaced from their homes in nearby towns and villages.

The war, for her, is simple in the end, captured on the olive-green shirt she wears. Across a map of Ukraine appears a single word: “Home.”

“I am a free-minded person and I cannot understand if someone does not recognize the freedom and self-expression of others,” she said. “Our children grew up free and I will protect them with my very chest.”

Because it was a day of appreciation for health workers, Ms. Zamazeeva attended a ceremony at a hospital. Vitaliy Kim, the head of the regional military administration and a symbol of the city’s resistance, was also present. One of the women being honored kissed his hand and said with a big smile, “Good morning. We’re from Ukraine!” The phrase, used by Mr. Kim in his video messages, has become a proud expression of the indomitable spirit of Mykolaiv.

At another hospital, Vlad Sorokin, 21, lay in bed, his ribs broken, his lung punctured, his right hip and one knee blown to bits. He is another victim of the missile strike that injured Ms. Svetlaya.

“I am not angry,” he said. “I am just asking why.” He struggled to speak, closing his eyes. “The Russians have put themselves in a very bad situation. They keep silent and listen to what they are told from the top and don’t think for themselves — and so they think it is normal to attack others.”

What would be the first thing he would do when he got well?

In a second bed lay another casualty of the blast, Neomila Ermakova, a dental nurse. Flying glass and debris had gone into her ears, cut her head and concussed her.

“I believe in destiny,” she said. “I had to go through this. It’s strange, I’d just finished a renovation of my apartment and told my grandson, ‘All this will be yours one day.’”

Empty advertising placards on the main road to Koblevo.
Tags
Sai̇d She That Ukraine Will

Russia appears to be taking steps toward two industrial cities.