Good morning. It’s Tuesday. We’ll recap the candidates and issues in today’s primaries. But first, we’ll look at why building owners in New York City are rushing to find ways to reduce emissions from their properties. 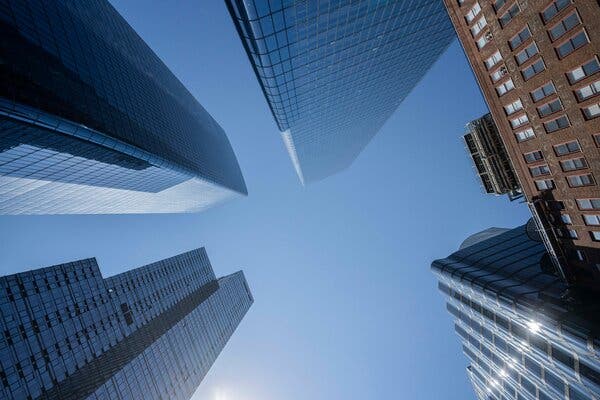 In 2019, the City Council enacted a package of bills to reduce the greenhouse gas emissions that cause climate change, including one bill that became Local Law 97 and set limits for emissions from large buildings. Building owners are scrambling to figure out how to pay for upgrades to comply. I asked our writer Jane Margolies to explain.

There’s a series of deadlines. You wrote that nearly all of the 50,000 buildings subject to this law will meet the first one, in 2024. What about the second deadline, in 2030? How hard will it be for building owners to comply with the standards that take effect then? What kind of work will they have to do?

For 2030, it could take not just tuning up heating systems that run on oil or gas but replacing them with systems that run on electricity. These can be expensive projects. New buildings can be designed with the requirements of Local Law 97 in mind, but it can be difficult to do retrofits in older buildings.

How steep are the fines?

It all depends on what your emissions are. The law has a specific equation for calculating fines based on how much a building is over its limit. The owner of the Bank of America building, once the greenest around, expects to pay $2.4 million a year in 2024.

What about apartment buildings? Aren’t they subject to the same law?

Yes, and they will actually have the hardest time complying. The majority of the buildings that look like they won’t make the 2024 deadlines are apartment buildings. Some of these are the ones with the rattly old windows. Many still have old oil-burning furnaces.Two garden apartment complexes in Queens that are faced with the prospect of replacing all their furnaces have brought a lawsuit against the city over Local Law 97.

You write that the real estate companies that run large office buildings have been working on going green. What about mom-and-pop companies that own smaller commercial buildings? Do they have a sense of what they have to do to comply — or what the fines would be?

Some of these owners have small staffs and have their hands full running their buildings and complying with other city regulations like for facade inspections. Some are just keeping their head above water, especially over the last couple of years of the pandemic when some lost tenants or had tenants that were not able to pay their rent in full.

Debbie Fechter, who’s a partner in a family-owned real estate business with four buildings in Manhattan that are covered by Local Law 97, told me that they’ve had trouble getting the attention of the engineering companies that owners hire to do energy audits on buildings for help on how to comply. The big real estate companies have dedicated sustainability staff whose job is to be on top of all this.

Some real estate executives say it’s unfair to hold them accountable for carbon emissions from the power plants that generate the electricity they would consume when they stop using fossil fuels in the boiler room. How would the city determine what a building owner is responsible for?

It’s based on how much power a building is using — information that owners report to the city. The thinking is that as the grid gets greener over time, with the addition of things like hydro power, the power-plant emissions that count against buildings will go down, and so will the fines.

Expect a chance of showers and thunderstorms in the afternoon and early evening, with temps near the mid-80s. At night, temps will be in the low 70s.

After campaigns that often turned antagonistic, the last few names on the November ballot will be chosen today — the candidates for Congress and the State Senate. There will also be two special elections. Here’s a recap of candidates and issues.

A court-ordered redrawing of the state’s congressional lines combined the East and West Sides of Manhattan into a single district, throwing two Democratic stalwarts into the same district: Representative Carolyn Maloney from the East Side and Representative Jerrold Nadler from the West Side.

Nadler has campaigned as a progressive and as the last Jewish congressman from New York. Maloney criticized him for playing identity politics even as she argued that voters should re-elect a woman because abortion rights are being rolled back nationally. The third Democrat in the race, Suraj Patel, is 38 — Nadler and Maloney are in their mid-70s. Patel built his campaign around the idea that it is time to let a younger generation step up.

Could another Maloney — the congressman whom House Democrats chose to protect their narrow majority — lose his own primary? That congressman, Representative Sean Patrick Maloney, is facing a challenge from State Senator Alessandra Biaggi in the new 17th district. Maloney describes himself as a “practical, mainstream guy” who is the chairman of the Democratic Congressional Campaign Committee.

But he angered progressives when he switched districts, crowding out Representative Mondaire Jones, who moved to Brooklyn to run in the new 10th district there. Biaggi has Representative Alexandria Ocasio-Cortez on her side, while the Democratic establishment has lined up behind Maloney.

Jones, when he moved to Brooklyn, jumped into a crowded field that includes Elizabeth Holtzman, who, in the 1970s, was the youngest woman ever elected to Congress. Bill de Blasio, the former mayor, was briefly a candidate but dropped out after a lukewarm reception.

The race is considered a tossup between Daniel Goldman, who was a prosecutor in the Trump impeachment and has put more than $4 million of his own money in the campaign; Jones; and two rising stars, Yuh-Line Niou, a state assemblywoman, and Carlina Rivera, a Manhattan councilwoman.

The Republican race in the redrawn 23rd district in western New York pits Carl Paladino, a Buffalo-area developer and former Republican nominee for governor, against Nick Langworthy, the state Republican Party chairman. Paladino is known for explosive and sometimes-racist remarks (including about Hitler). Langworthy, who was once an ally of Paladino, says Paladino could jeopardize a seat that should be easy for the Republicans to win.

Carlo and I were the only patrons in the Greenwich Village music bar. It was early in the evening, and the sun had not fully set.

We sat across from each other, nestled between two protective glass panels. I finally felt a joy, a stillness. I wanted the moment in the empty music bar, with Carlo, to last.

As night fell, a tall musician tuned his guitar and began to play the blues. He played generously, as Carlo requested B.B. King, Muddy Waters, Ray Charles, even Marvin Gaye.

The guitarist also played some of his own original compositions. I drank two rum and Cokes. Carlo had a diet soda. We shared a cup of fries.

The windows were open, and it was cold and rainy outside, so we kept our coats on. Carlo tapped his fingers to the music, and I moved to the rhythm quietly in my seat.

I recalled that Carlo and I had visited the same bar to hear Latin jazz in easier times. The place was packed that night. Delighted, I had watched Carlo dance saucily in his seat with unbridled joy, his eyes closed tight, his lips curled with pleasure.

Smiling suddenly, he had opened his eyes to see if I was watching him. I was. I can no longer dance to “Oye Como Va,” without recalling that moment.

Serenity in Midtown, Starting at $3,200 a Night? Aman Is Betting on It.

The East Hampton House Was Perfect. Except for One Thing.