With the balance of the House of Representatives at stake, national Democrats made an 11th-hour appeal to a federal court on Monday to intervene in New York’s heated redistricting dispute, hoping to reinstate House maps thrown out by the state’s highest court last week.

In a 17-page complaint, they argued that there simply was not enough time to implement the order from the State Court of Appeals for new district lines and still comply with a longstanding federal court order meant to protect the rights of Americans casting ballots from overseas.

The Democrats asked a panel of federal judges to exercise its authority to effectively block the state court from enforcing its decision, and instead require New York to hold this year’s elections in late June, as originally scheduled, on the map adopted by the Democrat-dominated Legislature.

“The state has an obligation to timely redistrict,” the complaint said. “Since it has failed to do so, this court must act.”

The unusual legal maneuver, funded by the Democratic Congressional Campaign Committee on behalf of five New York voters, amounted to a last-gasp effort by party leaders to save a set of lines that could net their party as many as three new seats in the battle for control of the House.

The State Court of Appeals tossed the maps last week, ruling that Democratic state leaders had violated a 2014 amendment to the State Constitution, including a ban on partisan gerrymandering. In a far-reaching decision, the judges ordered a court-appointed special master to draw the new lines instead and set the stage for the primary to be delayed until Aug. 23.

While it is not unheard-of for federal courts to temporarily allow elections to proceed on flawed maps for pragmatic reasons, it was far from clear that Democrats’ arguments would prevail here.

What to Know About Redistricting

A federal judge could, for example, be persuaded that there was enough time to draft new maps to satisfy the state court this year under the revised primary calendar. Other states frequently hold late-summer primaries and are able to comply with overseas ballot requirements.

Republicans said they were confident the state ruling would stand unimpeded.

“It’s a Hail Mary and a sign of desperation,” said John Faso, a former congressman who helped bring the Republicans’ initial legal challenge. “An Aug. 23 primary fully complies with the requirements of the federal military voters act.”

National Democratic leaders on Monday coupled the lawsuit with a public campaign to openly pressure the state courts to alter the process for drawing the new district lines, in case they do not prevail in court.

Representative Hakeem Jeffries of New York, the No. 5 House Democrat, criticized the judge overseeing the case for creating a process that makes it difficult for voters of color in his Brooklyn district to have any say in the final maps at all.

The judge, Patrick F. McAllister, has ordered that anyone wishing to offer input to the special master must do so in person at a courthouse in Bath, N.Y., on Friday.

Mr. Jeffries noted, in arguments that echoed parts of the lawsuit, that it was a five-hour drive from New York City and virtually inaccessible by public transportation — an arrangement he called “not acceptable.”

“The court must immediately schedule additional hearings at locations accessible throughout our state, including in New York City, Albany and Buffalo, before ruling on legislative and congressional districts drawn by an unelected, out-of-town special master,” he wrote to the judge.

The initial lawsuit, filed against New York State Democratic leaders, was financed and supervised by Republicans in Albany and Washington, and filed before Justice McAllister, a conservative Republican in Steuben County, N.Y.

What is redistricting? It’s the redrawing of the boundaries of congressional and state legislative districts. It happens every 10 years, after the census, to reflect changes in population.

Why is it important this year? With an extremely slim Democratic margin in the House of Representatives, simply redrawing maps in a few key states could determine control of Congress in 2022.

How does it work? The census dictates how many seats in Congress each state will get. Mapmakers then work to ensure that a state’s districts all have roughly the same number of residents, to ensure equal representation in the House.

Who draws the new maps? Each state has its own process. Eleven states leave the mapmaking to an outside panel. But most — 39 states — have state lawmakers draw the new maps for Congress.

If state legislators can draw their own districts, won’t they be biased? Yes. Partisan mapmakers often move district lines — subtly or egregiously — to cluster voters in a way that advances a political goal. This is called gerrymandering.

What is gerrymandering? It refers to the intentional distortion of district maps to give one party an advantage. While all districts must have roughly the same population, mapmakers can make subjective decisions to create a partisan tilt.

Is gerrymandering legal? Yes and no. In 2019, the Supreme Court ruled that the federal courts have no role to play in blocking partisan gerrymanders. However, the court left intact parts of the Voting Rights Act that prohibit racial or ethnic gerrymandering.

Want to know more about redistricting and gerrymandering? Times reporters answer your most pressing questions here.

The intervention by national Democrats rests on a decade-old order by the federal courts requiring New York to hold its federal primaries on the fourth Tuesday in June in nonpresidential election years. The courts put the requirement in place after New York violated a pair of federal laws meant to ensure that ballots are sent to military personnel and other overseas voters in a timely manner so they can be counted.

Since last week’s state court ruling, New York has not yet sought federal approval required to move that date. Democrats argue that the state cannot proceed without it, making Justice McAllister’s proposed timeline unenforceable for now. They contend that a federal judge should reinstate the New York Democrats’ map to govern this year’s election.

“Because this court has a short window to implement such a plan — certainly not enough time to retain a special master and craft its own — this court should adopt the plan passed by the New York Legislature and signed by Governor Hochul,” the complaint says.

Republicans, however, are likely to argue that New York will be able to win federal court approval to move the primary date. They argued in state court that a late August primary would leave enough time both to draw fresh maps and to ensure that overseas ballots are counted.

The difference between the maps drawn by Democrats and the ones generated by a special master could be substantial.

The maps struck down by the court last week would have given Democratic candidates a clear advantage in 22 of 26 House seats, compared with the 19 their party holds now, and diminished the number of competitive districts in New York overall.

A redrawn map adopted by the courts would be likely to increase the number of competitive seats overall. So while Democrats may still be able to win 22 or even 23 seats in a favorable political climate, they might be limited to as few as 18 in 2022, when the Republicans are on track to make gains nationwide. 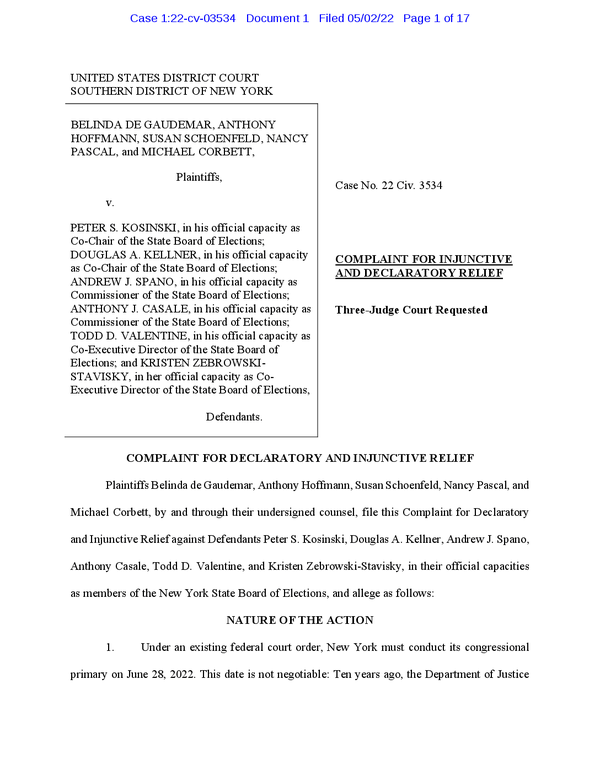 Democrats argued in a 17-page complaint that there simply was not enough time to implement the order from the State Court of Appeals for new district lines.

An Anaconda’s Play Date With Dolphins Took a Strange Turn

Partisan Fight Breaks Out Over New Disinformation Board