THE FAMILIA GRANDE, by Camille Kouchner
Translated by Adriana Hunter

It is hard to write a book about incest that is neither grotesque nor lurid, even more so when the family in question is famous, wealthy and powerful. Camille Kouchner’s memoir was a sensation in France for its unsparing portrait of gauche caviar, a sociological class with a distinct ideological heritage. Free of voyeurism and elegantly written, “The Familia Grande” is also an artistic success.

The book documents the relationship between Kouchner’s stepfather, the political scientist Olivier Duhamel, and her twin brother. Upon the book’s publication, Duhamel swiftly admitted his guilt. Had the statute of limitations not expired, he would have been prosecuted.

But “The Familia Grande” is less about incest than it is about May 1968, the relationship between a daughter and mother, and the destruction of a family. It was an illustrious family: Camille Kouchner is herself a respected lawyer. Her mother, Évelyne Pisier, was a pioneering feminist who had a relationship with Fidel Castro; her aunt, Marie-France Pisier, was a darling of French New Wave cinema. Her father, Bernard Kouchner, is a renowned humanitarian who co-founded Doctors Without Borders and served as a senior minister in several French governments. And Duhamel, her stepfather, was a politician, a professor of constitutional law and one of France’s best-known media figures.

The book begins with her mother’s death. The Pisier sisters, Évelyne and Marie-France, were women of “astonishing sexual arrogance,” the author says. Évelyne teaches her daughters to urinate in the grass; she plays with words, puns, Freudian slips. She loathes domesticity. Both venerate their mother, Paula, who discovered Simone de Beauvoir and fled her marriage, putting “a rocket under bourgeois conventions.”

The student protests of May 1968 inform all they do. These protests, organized by French students, quickly spread beyond academia. Protesters objected to capitalism, consumerism and imperialism. Paris was awash in slogans. But the real energy of the movement derived from what was arguably its primary agenda: sexual liberation. In practice, France was culturally conservative, Catholic, stultifying, hierarchical and authoritarian. Homosexuality was considered a mental illness and divorce a taboo. The control of sexual desire, many protesters believed, was an instrument of domination, and indeed a source of aggression and greed. The French Communist Party sympathized with the workers on strike but denounced the students as bourgeois imbeciles. 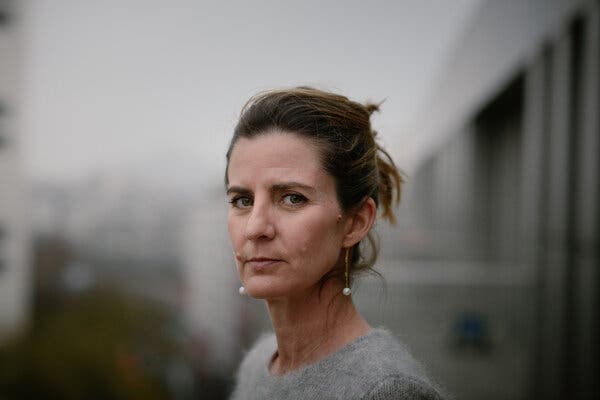 The author, Camille Kouchner, in 2021.Credit…Dmitry Kostyukov for The New York Times

The uprising would ultimately give rise to dramatic changes in French family life: abortion, contraception, no-fault divorce, premarital cohabitation, out-of-wedlock births. Some of the revolutionaries would have gone further. It seemed to them obvious that sexual liberation must begin in childhood. In 1977, Le Monde published an open letter, signed by eminent intellectuals, philosophers and psychoanalysts, in support of decriminalizing sexual relationships between adults and children under the age of 15.

Bernard Kouchner was a signatory.

Kouchner gives the narrator a dual voice, that of child and adult. (The translation, by Adriana Hunter, is tonally faithful and frequently creative, though on occasion Évelyne loses a bit of her sparkle.) We understand that Kouchner’s mother put “women’s freedom” above child care. Évelyne is repulsed by breast-feeding. Nannies take care of children while adults swap spouses. But Kouchner doesn’t demand we be revolted by her mother’s egotism. Their family is envied by other children. “Everyone can say what they think at your house. You’re so lucky … there’s never any orders or punishments.”

At the large estate in Provence where they vacation, children sleep in a dormitory papered with May ’68 posters. “La familia grande” was her stepfather’s name for the extended clan of children, stepchildren, adopted children and acolytes who gathered every summer to bathe naked in the family’s pool. Though the nickname pays homage to Castro, as a title it evokes the Mafia code of omertà.

Kouchner’s short sentences and simple diction evoke a child’s point of view; but if her prose is spare, it is not childish. Every member of the family is fully drawn — except her twin brother. He is assigned a pseudonym, to protect his privacy; she has also, perhaps unconsciously, effaced his personality. The women in the book outshine the men, and the men seem unable to survive them. We know of her grandfather only that he was a Maurrassian and, in the view of the family’s women, “a bastard.” He kills himself. Bernard Kouchner, her father, “was never around. My birth in 1975 did nothing to change that. Nor did my brother’s.”

When the twins are 6, Évelyne leaves her husband. “You’re not allowed to cry,” she tells the children. “I’m much happier like this.” When her brother expresses sadness at the separation, their grandmother abandons them on the sidewalk and tells them to walk home alone. Évelyne concurs: “No way I’m having stupid children or caricatures of children. Divorce is a freedom.”

When their father remarries, the twins’ relationship to him becomes still more attenuated. The charismatic Duhamel is eager to fulfill the young Camille’s longing for paternal affection: “You are my life, my new life, the one I was waiting for, the one I wanted. You’re my children, and more besides.”

Although the book has achieved renown for its indictment of incest, it is equally an indictment of suicide. Part 2 begins with her grandfather’s death, recounted in the same spare style. “Bullets to the head, with a revolver or a rifle. Two, I think.”

This too was freedom. “Stop overthinking it, he was absolutely free to kill himself,” her mother tells her.

Her grandmother, a member of the Association for the Right to Die With Dignity, has a ghoulish enthusiasm for volunteer work. “She would disappear to Switzerland and return serene.” She and her granddaughter stroll “around the pool for more than an hour, both in just our bikini bottoms, bare-breasted. My arm hooked through hers, our hands clasped behind our similar-looking backs.” They talk about books and boyfriends and feminism. “I’m proud of your grades, and so proud of your freedom already,” her grandmother says.

Kouchner adds, “My grandmother killed herself soon after that.”

It’s the second funeral in the book — “a militant, heartbroken crowd who’d come to pay tribute to my grandmother’s freedom to kill herself.” The suicide leaves Camille’s mother an alcoholic shell. She drinks herself blind every night: “This is absolutely not up for discussion. It’s my freedom.”

The book is a sharply focused portrait of a certain kind of privileged French family of its era, first revolutionary and then bourgeois: their sexual mores, their thirst for power and fame, the collateral damage to children. The violation of her brother is explained, midbook, in one sentence: “He started stroking me, and then, you know …”

From this point, the narrator’s voice ages as she comes to understand what this means, and the book takes on aspects of a psychological thriller. The twins keep the secret for years. At last, fearful for the safety of their own children, strangled by a “hydra” of guilt and shame, they confide in other members of their family, to decidedly mixed reaction.

The book finishes, effectively, in the most adult voice of all, that of the law. Camille Kouchner addresses her stepfather directly, reciting the text of the French penal code on incest. “Let’s be clear about this,” she writes:

Claire Berlinski is the editor in chief of The Cosmopolitan Globalist. She lives in Paris.

THE FAMILIA GRANDE, by Camille Kouchner | Translated by Adriana Hunter | 214 pp. Other Press. | $24.

Tags
Children Free Mother She That

Russia Advances Behind Brutal Barrage, but Will Its Strategy Keep Working?

Your Tuesday Briefing: A Mass Shooting Near Chicago