We’re covering the Chinese Communist Party’s decision to elevate Xi Jinping and the worsening migrant crisis at the Poland-Belarus border. 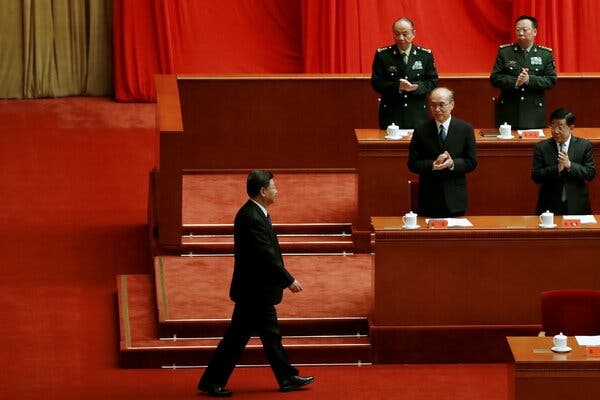 Leaders of China’s Communist Party on Thursday approved a rewriting of the party’s 100-year history, which placed Xi Jinping among the country’s giants. The move paved the way for Xi’s continued political dominance.

With no rival leader or heir apparent in view, Xi is expected to secure a third five-year term as the party’s general secretary at a party congress that is likely to be held in 2022. He is China’s most powerful leader in decades.

Details: During a closed-door meeting, senior party leaders elevated Xi to a stature equal to that of Mao Zedong, the founder of the country’s Communist rule, and of Deng Xiaoping, the chief architect of its economic boom.

Context: Xi’s recognition comes as China continues to grow as a geopolitical power. It navigated the Covid-19 pandemic relatively well after initially failing to contain the spread of the virus, but China faces economic risks from debt-laden companies as well as growing distrust from the U.S. and other Western countries.

On television: Although the meeting happened in private, a public, state-orchestrated adulation of the country’s leader began immediately afterward. The state television network doubled the length of its nightly newscast, and scores of identical positive comments were posted online.

Migrants received help from a coalition of humanitarian groups on Thursday.Credit…Maciek Nabrdalik for The New York Times

The border standoff between Poland and Belarus escalated on Thursday, with both countries issuing threats as thousands of migrants remained stranded along a razor-wire fence in the freezing cold.

Western leaders have accused Belarus’s autocratic leader, Aleksandr Lukashenko, of engineering a crisis by granting visas to migrants from the Middle East and escorting them to the borders of E.U. member nations.

Lukashenko said he might shut down the flow of a major pipeline carrying natural gas from Russia to Western Europe via Belarus if the West were to escalate sanctions.

Rising toll: With many of the migrants exhausted, freezing and exposed to the elements, eight people have died so far, according to officials, but the real number could be much higher. The Polish news media reported that a 14-year-old boy had frozen to death on the Belarus side of the frontier.

Quotable: “We became like a chicken in a cage in the hands of Belarusian and Polish police,” one migrant said. “One of them won’t let us go back to Minsk and the other won’t let us in.”

Politics: Poland’s hard-line stance on the migrant crisis has played well with its right-wing nationalist base, which on Thursday held an Independence Day march through the center of Warsaw.

An emergency unit at a hospital in Bucharest, Romania, this month.Credit…Cristian Movila for The New York Times

In the first week of November, Europe accounted for about two-thirds of the world’s 3.1 million new reported coronavirus infections and more than half of the 48,000 deaths reported globally, a 10 percent increase in death toll in just one week.

The trend is at odds with the trajectory of other regions: The rate of new reported Covid deaths worldwide decreased 4 percent over the same stretch of time, and the rate of new cases remained stable.

The authorities in some countries, such as the Netherlands, have reimposed restrictions requiring face masks and vaccine passes in certain areas. New lockdown restrictions for Austria’s unvaccinated population are likely because new cases are rising rapidly, the chancellor said on Thursday.

Trash piled up this week in Glasgow’s streets in Finnieston, an area near the COP26 summit.Credit…Kieran Dodds for The New York Times

As diplomats at the U.N. climate talks in Glasgow preach about the need to curb emissions and mass consumption to protect the planet, the reality of today’s throwaway society can be seen just a short way from the conference’s doorstep: Dumpsters and trash cans are overflowing, the city’s rat population has surged, and litter is strewn across streets.

Lives lived: F.W. de Klerk, who as president of South Africa dismantled the apartheid system that he and his ancestors had helped put in place, died at 85.

Bianca Marroquín during the reopening performance of “Chicago” on Sept. 14.Credit…Jeenah Moon for The New York Times

The legacy of ‘Chicago’

When “Chicago” premiered in 1975, it wasn’t a hit. Inspired by sensationalist murder trials, the vaudeville-style musical follows the character Roxie Hart’s ascent to fame after she kills her lover. The production “seemed too chilly, in those days, to be truly loved,” Ben Brantley wrote in The Times, pointing to the show’s themes of “greed, corruption, violence, exploitation, adultery and treachery.”

But then came a streamlined reworking of the production in 1996 that bubbled “like vintage Champagne,” Brantley wrote. “Chicago” went on to become the longest-running American musical in Broadway history, and nabbed six Tony Awards, an Oscar-winning film adaptation and over 30 international reproductions.

The show has stayed fresh with the help of glitzy cast members: singers like Patti LaBelle and Usher, movie stars like Brooke Shields and Patrick Swayze, and even reality TV personalities like NeNe Leakes. “It’s not a stunt: We don’t take anyone that can’t fulfill the stage work,” the producer Barry Weissler said. “There have been people — even important people in the music world — who couldn’t cut it onstage, so didn’t make it into the show.”

For the 25th anniversary of the revival, Juan A. Ramírez spoke with the musical’s composer, producers and actors about its history.

This is the secret to a better green salad.

Kevin Birmingham’s “The Sinner and the Saint” tells the story of a murder that inspired Dostoyevsky’s writing.

The three-part documentary “The Beatles: Get Back” explores the band’s breakup and reveals that there’s still plenty to debate.

P.S. Patricia Cohen will soon move to London to be our global economics correspondent.

The latest episode of “The Daily” covers how American public health officials experienced the pandemic.

Sanam Yar wrote today’s Arts and Ideas. You can reach Matthew and the team at briefing@nytimes.com.

The clash over the Belarus-Poland border crisis spills into the U.N. Security Council.