Good morning. We’re covering the reinstatement of Sudan’s prime minister and the global race for cobalt. 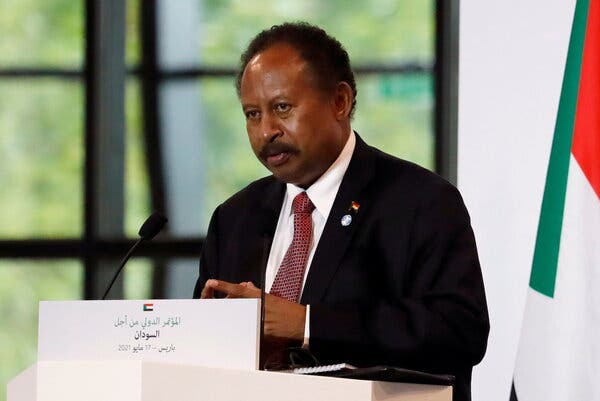 Abdalla Hamdok, Sudan’s prime minister, returned to power on Sunday, four weeks after he was ousted in a military coup.

Appearing at a ceremony next to the army general who detained him, Hamdok signed a deal that placed him back as prime minister with a power-sharing arrangement intended to lead Sudan through a transitional period of three to four years, until democratic elections could be held. However, the exact terms of the deal were unclear and some key points of contention, such as who would appoint an attorney general, were not finalized, officials said.

Protesters who had called for Hamdok’s reinstatement were unsatisfied with the deal, and some who gathered at the ceremony appeared infuriated that he had compromised with the military that they despised.

In recent weeks, 41 protesters have been killed and hundreds more wounded, as Sudanese security forces have cracked down on anti-coup demonstrations that have swept Sudan’s major cities.

Context: The power-sharing agreement was initially signed in 2019 after the ouster of Omar Hassan al-Bashir, who led Sudan as a dictator for three decades and who was charged with war crimes over his role in atrocities in the western Darfur region in the 2000s.

The Tenke Fungurume mine in the Democratic Republic of Congo is now controlled by a Chinese company.Credit…Ashley Gilbertson for The New York Times

China is winning the race for minerals

As the world’s largest economies shift to cleaner energy, minerals and metals needed in batteries are replacing oil as the target in the global race for energy dominance.

Cobalt is one of the most important of those materials, and more than two-thirds of the world’s supply comes from the Democratic Republic of Congo. After the U.S. failed to safeguard decades of diplomatic and financial investments in Congo, state-backed Chinese businesses now control the world’s largest supply.

A Times investigation found that 15 of the 19 cobalt-producing mines in Congo were owned or financed by Chinese companies, some of which were accused of withholding payments and ignoring promises to their Congolese partners.

What’s next: The U.S. is now trying to play catch-up, pressing for access to cobalt supplies from allies including Australia and Canada, according to a national security official with knowledge of the matter.

Background: The American president’s son, Hunter Biden, was part owner of a firm that helped facilitate a Chinese company’s purchase of one of the world’s richest cobalt mines from a U.S. company.

For a year, a large group of Indian farmers left their crops and camped out in the outskirts of New Delhi in a sustained protest with an unlikely goal: convincing Prime Minister Narendra Modi to reverse new agricultural laws that farmers feared would destroy their way of life.

The protesters’ ultimate success — announced on Friday in a rare retreat by Modi in which he asked for “forgiveness” — came because of financial support, tight organization and disciplined nonviolence.

The movement started in Punjab, home to a large community of Sikhs and some of the country’s richest agricultural land, and relied on the Punjabi Sikh diaspora for financial assistance.

In October, a convoy from the ruling Bharatiya Janata Party rammed into a group of protesting farmers in Uttar Pradesh, resulting in eight deaths and plummeting poll numbers, which may have been a turning point.

What’s next: The farmers aren’t done protesting. They have vowed to continue until Modi’s government agrees to guarantee a minimum price for nearly two dozen crops.

India’s farming system still needs repair, which many farmers acknowledge. Some comfortably live middle-class lives, but many others end up in debt. Staple grains are prioritized while more nutritious crops, like leafy vegetables, are neglected.

A family scheduled for eviction waiting outside their home in Piera, near Barcelona, Spain, this month.Credit…Samuel Aranda for The New York Times

Omar Raddad, center, at a hearing in Nice, France, in 1991.Credit…Gilles Bassignac/Gamma-Rapho, via Getty Images

Three decades ago, the brutal killing of a wealthy socialite became one of France’s most enduring murder mysteries. The socialite, Ghislaine Marchal, was found dead in the basement of her villa; the only door was locked from the outside but also barricaded from within; and a message, scrawled in the victim’s own blood, accused her Moroccan gardener, Omar Raddad. He was subsequently convicted, but new DNA technology may lead to a second trial and perhaps an exoneration.

Young women with rollers in their hair in Seoul.Credit…Jean Chung for The New York Times

On the subway cars and in the streets of South Korea, it has become common to see young women wearing an accessory that was once reserved for much less public settings: old-fashioned hair curlers locked tightly into their bangs.

The plastic cylinders, usually covered in Velcro, are more than just a functional tool from a previous era — they also reflect shifting ideas about gender and beauty in a new one.

Many young people in South Korea no longer feel beholden to the conventions that were once strictly observed in a country that is also one of the world’s biggest beauty industries. “You only have to look good in front of the people you care about,” one college student told The Times.

Lee Jeong-jin, 51, is disappointed that her 21-year-old daughter often wears curlers outside. But, recalling the tall, voluminous hairstyles of her youth, she can also relate.

“I’m pretty sure the older generation thought we were the weird ones back then,” she said.

Our tech columnist had an A.I. program help write his review of a new book about artificial intelligence.

The latest episode of “The Daily” is about Belarus.

You can reach Matthew and the team at briefing@nytimes.com.

Tags
New One Protest Sudan Who

He Sold Away His People’s Heritage. He’s in the Jungle to Get It Back.

Two of 17 Kidnapped Missionaries in Haiti Are Freed, Group Says

Biden Veers Off Script on Taiwan. And Not for the First Time.