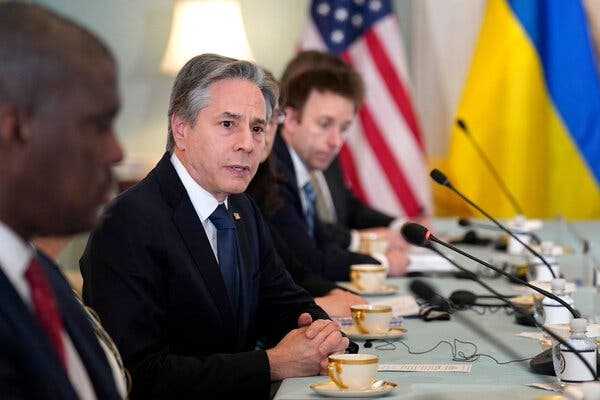 Secretary of State Antony J. Blinken during a meeting with Prime Minister Denys Shmyhal of Ukraine on Friday in Washington.Credit…Pool photo by Susan Walsh

In a trip shrouded in secrecy, Antony J. Blinken, the U.S. secretary of state, and Lloyd J. Austin, the defense secretary, made a wartime journey yesterday to Kyiv, Ukraine, where the president, Volodymyr Zelensky, urged them to provide more aid in his nation’s battle against Russian invaders. Follow the latest updates.

Congress has already approved $13.6 billion in emergency spending related to the invasion, including for weapons, military supplies and one of the largest infusions of U.S. foreign aid to any country in the past decade. Last week, President Biden announced an additional $800 million in military aid, including equipment to help combat Russia’s new focus on seizing eastern Ukraine.

Russia yesterday redoubled its assault on the eastern port city of Mariupol, where a steel plant held by Ukrainian forces is under ferocious attack and where an estimated 120,000 people are surviving in what witnesses have described as barbaric conditions.

Emmanuel Macron addressing supporters in front of the Eiffel Tower after his victory.Credit…Sergey Ponomarev for The New York Times

In the second-round runoff of France’s election, Emmanuel Macron, the president, triumphed over Marine Le Pen, his far-right challenger, with a lead of about 17 percent points. In a solemn address, Macron said it was a victory for “a more independent France and a stronger Europe.”

During the campaign, Le Pen was hostile to NATO, the U.S. and the E.U., as well as to the fundamental values that hold that no French citizens should be discriminated against because they are Muslim. Jean-Yves Le Drian, the foreign minister, said the result of the election reflected “the mobilization of French people for the maintenance of their values and against a narrow vision of France.”

Le Pen, who conceded defeat, bitterly criticized the “brutal and violent methods” of Macron without explaining what she meant. She vowed to fight on to secure a large number of representatives in legislative elections in June.

Context: Since 2002, no French president had succeeded in being re-elected. Macron’s unusual achievement in securing five more years in power reflected his effective stewardship over the Covid-19 crisis, his rekindling of the economy and his political agility in occupying the entire center of the political spectrum.

Related: In parliamentary elections in Slovenia, preliminary results indicated that the populist prime minister, Janez Jansa, had lost to his centrist rivals.

At the U.N. headquarters in New York on April 7, the General Assembly passed a resolution to suspend Russia from the Human Rights Council.Credit…Jason Szenes/EPA, via Shutterstock

As the war rages on in Ukraine, governments across Africa, Asia and Latin America have refused to take a side, avoiding the binary accounting of us-versus-them that characterized most of the post-World War II era and pointing to the confidence of smaller countries, no longer dependent on a single ideological or economic patron, to go their own way.

The present geopolitical landscape has often been likened to that of a new Cold War. While the main antagonists may be the same — the U.S., Russia and, increasingly, China — the roles played by much of the rest of the world have changed, reshaping a global order that held for more than three-quarters of a century.

In a vote at the U.N. this month to suspend Russia from the Human Rights Council, dozens of countries abstained, including Thailand, Brazil, South Africa, Mexico and Singapore. More than half of the abstentions were among African nations, many of which have been the recipients of growing Chinese attention and investment. (The resolution succeeded anyway.)

Historical allegiances: Some U.S. allies have characterized their decision to diversify as a function of American absenteeism on vaccine diplomacy or trade. And Russia, which lacks both the patronage cash and the geopolitical clout of the Soviet Union, cannot necessarily count on its former allies, either.

American adolescence is undergoing a drastic change. Three decades ago, the gravest public health threats to U.S. teenagers came from binge drinking, drunken driving, pregnancy and smoking. These issues have since been replaced by a new public health concern: soaring rates of mental health disorders.

“We need to figure it out,” said Candice Odgers, a psychologist at the University of California, Irvine. “Because it’s life or death for these kids.”

It’s an open secret in Hollywood that book stylists suggest reading material for celebrities and influencers to carry — and be photographed with — in public. Fashion has also looked to literature for inspiration of late: Last year, Dior featured models walking down a runway printed with Jack Kerouac’s “On the Road,” while Valentino tapped authors like Brit Bennett and David Sedaris to contribute to ad campaigns.

Books have become “coveted signifiers of taste and self-expression,” Nick Haramis writes in T Magazine — though some critics have wondered if the books are simply being used as props.

As for the authors? If books have become a version of the latest It bag, it can only be good for business. “If you ask any writer, they want to be read, but they also want to keep writing,” said Karah Preiss, who runs Belletrist, an online reading community, with the actress Emma Roberts. “The bottom line for publishers is not ‘Did your book get read?’ It’s ‘Did your book sell?’ And famous readers sell books.”

How much do antidepressants help, really?

In Patrick McCabe’s “Poguemahone,” set in hippie-era London, a pair of Irish siblings struggle against society and their own worst natures.

P.S. Eduardo Medina, a Times fellow, will join the Express desk as a general assignment reporter.

The latest episode of “The Daily” is on the French election.