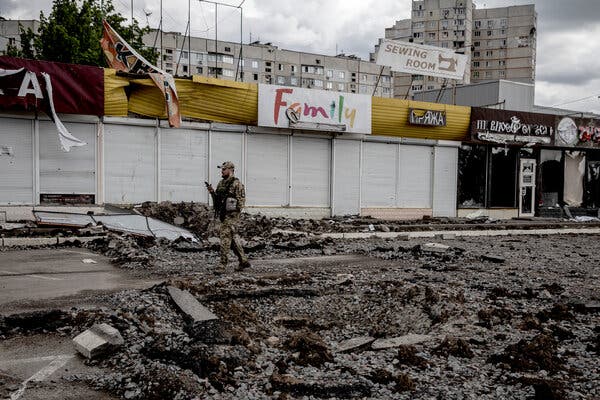 A Ukrainian soldier in a heavily bombed neighborhood of Kharkiv on Sunday.Credit…Finbarr O’Reilly for The New York Times

NATO to fast-track membership for Finland and Sweden

Jens Stoltenberg, the NATO secretary general, announced yesterday that the security bloc would grant fast-track membership to Sweden and Finland. The move raises the pressure on Vladimir Putin, who justified Russia’s invasion of Ukraine by what he cast as the need to keep the military alliance away from his country’s borders. Follow the latest updates.

Finland’s Parliament is expected to ratify a NATO application today, and Sweden’s governing Social Democratic Party said yesterday that it would vote in favor of joining. “President Putin wants Ukraine defeated, NATO down, North America and Europe divided,” Stoltenberg said. “But Ukraine stands, NATO is stronger than ever, Europe and North America are solidly united.”

The decision by Finland and Sweden to apply to join NATO raises the likelihood that the alliance’s troops will deploy along Russia’s 810-mile border with Finland.

Next steps: An application to join NATO must be unanimously approved by its 30 members. One of them, Turkey, has raised issues over the pending applications, though it has suggested it will not oppose admission if its own security concerns are addressed.

On the ground: Ukrainian forces have advanced to near the Russian border in recent days after pushing Russian troops from the outskirts of Kharkiv, Ukraine’s second-largest city. Evidence is growing that Russia’s offensive in the Donbas region farther east is faltering after initial modest gains.

Nearly one million people have died from Covid-19 in the U.S. Many of the loved ones they left behind are carrying a grief that feels lonely, permanent and agonizingly removed from a nation that wants to move on.

In dozens of interviews with The Times, people across America who have lost relatives, spouses and friends to Covid described how they had experienced the pandemic, from the fearful unknowns of the early weeks to this moment, with a reopened nation moving forward, even as more than 300 people are dying every day.

For now, there is no enduring national memorial to those lost, no communal place to gather and mourn. And for some, their grief seems met almost with indifference.

First person: “For us, the pandemic isn’t just this blip in our history,” said Erin Reiner, whose mother died of Covid. “People talk about it like it’s such an inconvenience — we don’t get to do this; we don’t get to have this celebration. I only wish that’s all it was for us, for me, for the countless other families.”

Alternative outcome: If the U.S. had the same Covid death rate as Australia, about 900,000 lives would have been saved. Our Australian bureau chief explores what went right in Australia and wrong in the U.S.

In a vote that was delayed for nearly two years, hundreds of lawmakers in Somalia yesterday elected Hassan Sheikh Mohamud as the country’s new president. Mohamud, a former president and peace activist, received 214 votes from the 328 lawmakers, who were picked by clan representatives.

His selection ends a bitter election period marred by corruption, his predecessor’s attempt to cling to power and heavy fighting in the streets. Mohamud defeated three dozen candidates after three rounds of voting, including Mohamed Abdullahi Mohamed, who drew condemnation after extending his term last year.

The vote comes amid a host of challenges for Somalia: soaring inflation, a recent deadly drought and the threat of Al Shabab, a terrorist group linked to Al Qaeda. After more than 16 years, the group now has wide powers, including extorting taxes, judging court cases, forcing minors into its ranks and carrying out suicide bombings.

Context: Somalia’s 16 million people have suffered for decades from civil wars, weak governance and terrorism. The central government has been bolstered by African Union peacekeepers and Western aid.

News From the Middle East

What does the data tell us about wealth and happiness?

The wealthiest Americans — the 140,000 who earn more than $1.58 million per year — may not be the magnates you think they are. And the things that make us happy are almost exactly what you’d expect: nature, sex, friends and exercise, writes Seth Stephens-Davidowitz in this piece from our Opinion section.

Many adults under 35 are throwing financial caution to the wind, Anna P. Kambhampaty reports in The Times. Discouraged about the future — amid climate change, a pandemic, war and more — this group is saving less and pursuing passion projects, like coral farming, above, or risky careers.

There are some historical analogies here. During the Cold War, the threat of nuclear war shaped young people’s plans. And when the 2008 financial crisis hit, saving for a home felt useless for many people. “If you have an apocalyptic vision of the future, why would you save for it?” a financial psychologist said.

Hannah Jones, a standup comic in Denver, put it this way: “I’m not going to deprive myself some of the comforts of life now for a future that feels like it could be ripped away from me at any moment.”

This roasted potato salad is full of lovely, zingy flavors.

Getting back into running is easier than you think.

“Chums,” a new book by Simon Kuper, takes an inside look at Boris Johnson and other future Conservative politicians as students at Oxford.

Here’s today’s Mini Crossword, and a clue: Sound of air leaking from a tire (three letters).

P.S. Elisabeth Goodridge, The Times’s deputy travel editor, will study travel reporting in an era of climate change as a 2023 Nieman fellow at Harvard.

The latest episode of “The Daily” is on America’s Covid death toll.

A Fringe Conspiracy Theory, Fostered Online, Is Refashioned by the G.O.P.

In Rebirth for NATO, Europe Unites in Face of Putin’s Ambition