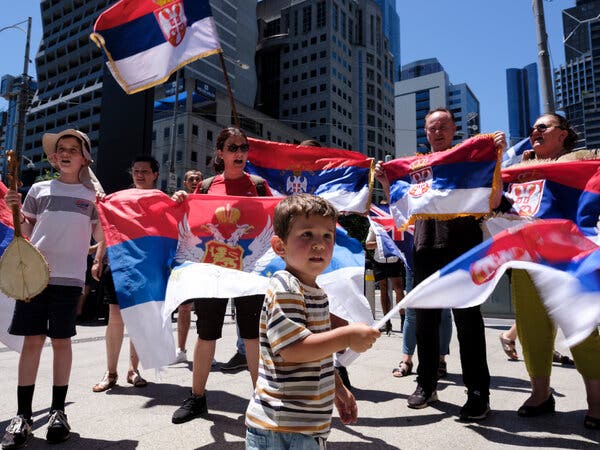 Supporters of Novak Djokovic gathered outside a court in Australia before the judges issued their ruling.Credit…Alana Holmberg for The New York Times

The unvaccinated Serbian tennis superstar left Australia on Sunday night after a court ruled against his bid to stay, costing him a chance at a 10th Australian Open title and a record-breaking 21st Grand Slam title.

In a unanimous decision, the court ruled that Australia’s immigration minister was within his rights to cancel Novak Djokovic’s visa for a second time on the basis that the player could pose a risk to public health and order. (Here’s an explainer on the case.)

Djokovic could be barred from entering Australia for the next three years under its laws regarding visa cancellations. He could face further international travel challenges if he does not get vaccinated.

Tennis: The Australian Open will begin on Monday with a vacuum at the top — Djokovic has won its last three men’s singles championships.

Australia: Some legal experts called for changes to the immigration minister’s “godlike” powers. Djokovic lost to public outcry and “a government determined to make him a symbol of unvaccinated celebrity entitlement,” our Sydney bureau chief writes in an analysis.

Russia, the West and Ukraine

Last week’s diplomatic marathon did not defuse the security crisis that Moscow has ignited in Eastern Europe. Ukraine remains surrounded on three sides by 100,000 Russian troops.

And on the sidelines of the talks, Russia issued more subtle but wide-ranging threats.

Vladimir Putin, the Russian leader, wants to extend Russia’s sphere of influence to Eastern Europe and secure written commitments that NATO will never again enlarge. Russian officials have hinted that Moscow could take measures like placing nuclear missiles close to the U.S. coastline, if the West fails to meet its security demands.

U.S. officials are threatening to throw their weight behind a Ukrainian insurgency should Russia invade. On Friday, the White House accused Moscow of sending saboteurs to stage an incident in Ukraine to create a pretext for invasion.

Cyber conflict: On Saturday, Microsoft said it had detected highly destructive malware in Ukraine that appeared to be waiting to be triggered by an unknown actor. On Friday, hackers brought down several Ukrainian government websites.

Analysis: After years of drift, Trumpian ridicule and failure in Afghanistan, NATO stands united once again in its longstanding goal of containing Russia.

Kak Sovann Chhay, center, celebrated his release from prison after being jailed for insulting ruling party officials on social media.Credit…Cindy Liu for The New York Times

A new law will allow the authorities to monitor the web by forcing all internet traffic — including from abroad — to route through a government portal.

Even though free speech is enshrined in the Constitution, government surveillance is high in Cambodia. Each ministry monitors the web and reports offending content to an internet crime unit in the Ministry of Interior.

Rights groups say that the new law will make surveillance even easier, and that the crackdown on digital expression is about to get worse. Recently, dozens have been sent to jail for posting jokes, poems, pictures, private messages and songs.

Analysis: Cambodia has become the latest country in the region to embrace China’s authoritarian internet surveillance. Critics say the rule will deepen the clash over the future of the web.

In his latest “Close Read,” our critic Jason Farago explores “In Memory of My Feelings — Frank O’Hara,” a 1961 painting by the American artist Jasper Johns. “I want to show you my favorite Johns painting,” Jason writes, “one that first appears as impersonal as any other — and which, slowly, delivers a roundhouse of passion and pain.”

The Novak Djokovic Standoff With Australia

A vaccine exemption question. Novak Djokovic was refused entry to Australia over questions about a Covid vaccine exemption. After he challenged the ruling in court, a judge allowed him to enter. Authorities then revoked his visa again, and he lost his final bid to stay when a three-judge panel upheld the decision.

How it started. The standoff began when Djokovic received an exemption that would allow him to defend his Australian Open title. Upon arrival, federal officials said he did not meet the requirements for entry because he was unvaccinated, and canceled his visa.

How it ended. For more than a week, the world gawked at a conflict centered on the controversial tennis star, filled with legal minutiae and dramatic ups and downs. Ultimately, Djokovic lost to a government with powerful laws that was determined to make an example out of him.

The bigger picture. Amid a difficult time in Australia’s fight against Covid, the standoff highlighted the growing public outcry against high-profile vaccine skeptics like Djokovic when they want to play by different rules than everyone else.

What happens next. It is unclear what will happen at the next major tournaments on the men’s tour, but the standoff in Australia presages some of the headwinds Djokovic could face if he attempts to travel the world without being vaccinated for Covid-19.

A childhood in war

Maria Abi-Habib, The Times’s bureau chief for Mexico, Central America and the Caribbean, wrote about the impact of growing up in Lebanon during the country’s civil war. Here’s a taste of her moving essay.

When you’re a child, how do you get through a war?

Some of those same crutches used to make it through a childhood scarred by conflict — like endless board games — are now a source of trauma for me and my friends. We grew up during Lebanon’s civil war and are now adults trying to live normal lives, raising our own families as the country crashes and burns yet again.

For my generation, emotional minefields can surround the most mundane activities even 32 years since the war ended.

“I don’t do well in romantic settings,” said my friend Nadine Rasheed, a 40-year-old product developer who now lives in New York. “Candles give me anxiety. We spent so much time studying by candlelight after school.”

The crisis in Lebanon has meant households are once again stockpiling candles and board games. Reminders of a past war are now staples of the present decay.

Caramelized mushrooms are bathed in a satiny glaze of honey and butter in this udon dish.

“Belle,” from the writer-director Mamoru Hosoda, is a “rapturously beautiful” anime about a high school student who journeys into a virtual world, our critic writes.

Our pop music critic Joe Coscarelli called the singer Maren Morris a “soulful, R&B-obsessed hook machine and a storyteller in a Southern tradition.”

P.S. The Times’s documentary “Day of Rage” about the Jan. 6 Capitol riot has been shortlisted for an Oscar.

The latest episode of “The Daily” is about Sidney Poitier.

You can reach Amelia and the team at briefing@nytimes.com.