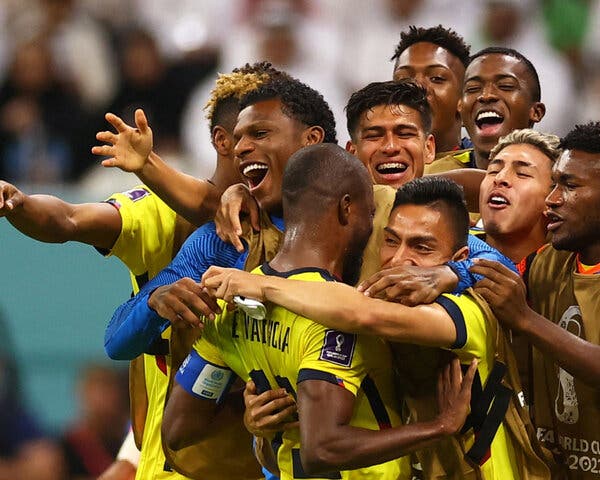 Ecuador celebrated a goal against Qatar in the opening match yesterday.Credit…Kai Pfaffenbach/Reuters

This is typically a joyous sporting event, but concerns about corruption and human rights violations loom large. Qatar’s World Cup may have permanently altered the fabric of the sport.

The Morning newsletter spoke with my colleague Tariq Panja, who is at the tournament. Here’s an excerpt from their interview.

How big is the World Cup, globally?

There’s nothing bigger than this, not even the Olympics. The World Cup is the most–watched event in the world.

These 32 teams capture the imagination of supporters even outside their borders, particularly in Asia, where most countries historically do not qualify for the World Cup.

Why did Qatar want to host so badly?

Qatar is a tiny speck in the Gulf desert wanting the world to know it’s here. It’s the first Arab and first Muslim nation to host a sporting event of this size. Saudi Arabia and the U.A.E. are looking on enviously.

In 2009, Qatar spent tens of millions of dollars to try to host the World Cup. Still, Qatar’s bid seemed like a joke. They were getting questions about the heat, about how they could fit the games in a country smaller than Connecticut and whether they would allow alcohol.

When FIFA’s president at the time opened the envelope and Qatar’s name came out, immediately everyone zeroed in on corruption. The investigations that followed forced FIFA to change the way it designated a host and revealed how a country was able to bend the world to its will through force of cash.

How has Qatar prepared? And what are the controversies?

They essentially had to rebuild an entire country in 12 years to host this one-month event.

The country’s human rights record has been under scrutiny beyond the worker deaths. The World Cup is supposed to be this festival open to everyone. How does that square with a country that would jail you for being gay?

What are you watching for in the matches?

Iran is under a lot of scrutiny because of their national protests; a player from France, Eduardo Camavinga, has received racist messages on social media; some of Argentina’s fans have created a nasty, racist song about another French player, Kylian Mbappé.

In terms of the soccer, look out for Brazil. Then there’s Argentina. This may be the last World Cup for one of the sport’s greats, Lionel Messi.

And a non-European team has not won the tournament since 2002. So maybe this will be the time to end that 20-year wait.

For more, sign up for our World Cup updates.

Major oil producers blocked efforts by more than 80 countries to call for a “phase-down” of all fossil fuels. Credit…Joseph Eid/Agence France-Presse — Getty Images

COP27 ends with a landmark deal

The decision on payments for loss and damage caused by global warming was a breakthrough: For more than 30 years, developing nations have pressed rich countries to provide compensation for the costs of extreme weather linked to rising temperatures. On Saturday, the U.S. — the last big holdout — agreed to a fund.

Developing countries hailed the deal as a landmark victory. But there is no guarantee that wealthy countries will deposit money into the fund — or meet their existing goals. The deal called for a committee with representatives from 24 countries to hammer out next steps.

And some leaders said the summit didn’t go far enough in addressing the root causes of global warming. “The loss and damage deal agreed is a positive step, but it risks becoming a ‘fund for the end of the world’ if countries don’t move faster to slash emissions,” an expert said.

Elon Musk reinstated Trump’s Twitter account. But it’s not clear if the former U.S. president will start posting again. As of now, his last post is from Jan. 8, 2021, and he told Fox News that he would stay on Truth Social, his own social network.

Musk, who appears to be fighting to keep the lights on, seems to have made the decision with a simple poll. More than 15 million votes were logged, and Trump’s reinstatement won with nearly 52 percent.

The site barred Trump after the Capitol riot on Jan. 6, 2021, saying that his posts had run the risk of inciting violence. His return to Twitter could give him wider reach, as he begins his 2024 run for president, but could also amplify division: As president, Trump used the platform to spread misinformation and sow doubt about elections.

Twitter: Trump’s reinstatement could further deter Twitter’s advertisers, which provide the bulk of the platform’s revenue. On Friday, after 1,200 more employees quit, Musk had to ask for help with the underlying technology.

A family waiting to be evacuated from Kherson on Saturday.Credit…Lynsey Addario for The New York Times

For a welder in Basra, Iraq, scalding summer temperatures can cause long-term damage to his body, and the heat from his equipment exacerbates working conditions.Credit…The New York Times

How does extreme heat affect the body? The Times visited two cities transformed by climate change — Kuwait City and Basra, Iraq — to document what billions of people may soon experience.

A film critic, at war

For Anton Filatov, left, with an AK-47 at his side, life before the war seems so far away.Credit…Jim Huylebroek for The New York Times

Before Russia invaded, Anton Filatov was one of Ukraine’s top film critics. “I had never touched a weapon,” he told The Times. “I was against war. I ran as far as I could from it.”

Now, the nearsighted 34-year-old is serving on the front lines. And he’s still finding time to write, delving into his fear, sorrow, rage and anxiety in regular blog posts. In one post, he compared the underworld of a Jo Nesbo thriller, “Phantom,” to the suspicion and treachery in Donbas, where many residents support the Russian military.

“The settlements here are full of traitors,” he wrote. “They walk the streets like phantoms. Restless. Invisible. Dangerous.”

Here are his top 10 films for surviving a war.

“Dawn,” a Turkish novel from 1975 translated for the first time into English, is a chorus of voices from all corners of Turkish society.

How well did you keep up with the headlines last week?

Here are the Wordle and the Spelling Bee.

P.S. Steven Ginsberg will be the executive editor of The Athletic, the sports website owned by The Times.

Start your week with this narrated long read about Uruguay’s climate response. On Friday, “The Daily” tackled Sam Bankman-Fried and FTX.

Lauren Jackson interviewed Tariq Panja for “The Morning.” You can reach Amelia and the team at briefing@nytimes.com.

Dagny Corcoran, Bookseller and Fixture of the L.A. Art Scene, Dies at 77