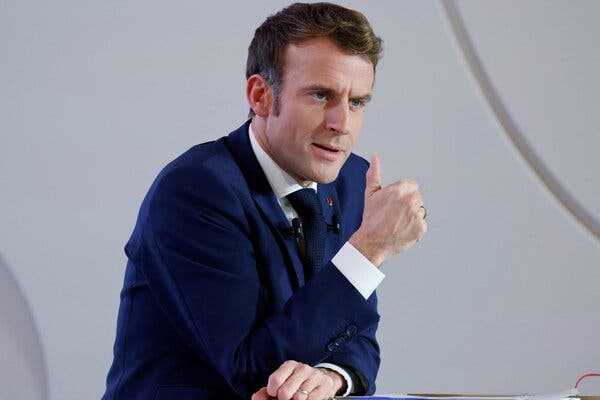 President Emmanuel Macron of France made it clear he wanted to make the lives of the unvaccinated harder.Credit…Pool photo by Ludovic Marin

Macron says he wants to ‘piss off’ the unvaccinated

Using his harshest language yet about the unvaccinated — the French word he used is more vulgar — Emmanuel Macron, the French president, said he would not “throw them in prison” or “vaccinate them by force.” But he made it clear he meant to make their lives harder.

More than 77 percent of French people, and 92 percent of those 12 and older, have received at least two doses of the Covid vaccine. It is an unexpected feat in a country that was one of the most suspicious of vaccines just a year ago. There is anger at a minority who refuse to be vaccinated and disproportionately occupy hospital beds, and Macron appears to be tapping into a political vein before an election in April.

The president was also reacting to moves this week by opposition lawmakers to delay the passage in Parliament of a bill that would make it possible to obtain France’s health pass only through vaccination and no longer with a negative Covid test.

The revolt began on Sunday as a protest against a surge in fuel prices and expanded into an attack on an entrenched Kazakh elite. A Russian-led military alliance said on Wednesday that it would send peacekeeping forces at the invitation of Kazakhstan’s president.

Protesters have stormed government buildings, TV stations and hundreds of businesses. On Wednesday, the president announced that the entire government would be sacked and that new parliamentary elections were possible. Protesters, seemingly unsatisfied, took control of the country’s main airport.

Footage posted online on Wednesday showed thousands of people flooding into the main government building in the country’s largest city, Almaty. Smoke billowed from the building as the crowd began to disperse.

What’s next: Protesters seek the direct election of regional leaders rather than presidential appointments, essentially demanding the ouster of the forces that have ruled the country without substantial opposition since it achieved independence from the Soviet Union in 1991.

Context: Kazakhstan has been regarded until now as a pillar of stability in an unstable region, though at the price of a repressive government. The countries of the former Soviet Union are closely watching the protests, which could help energize opposition forces elsewhere.

Details: The Collective Security Treaty Organization is Russia’s version of NATO. The current chairman, the Armenian prime minister, Nikol Pashinyan, said that the troops would be stationed there only “for a limited time period.” But Russia is notorious for sending in troops under the guise of peacekeeping missions that go on to establish a permanent presence.

After a 10-hour airport standoff over the validity of his visa and questions about his vaccine medical exemption for the Australian Open, Novak Djokovic, the No. 1 men’s tennis player, was told to leave the country.

The chain of events represented a startling turnabout for Djokovic, who in a little more than 24 hours went from receiving special permission to play in the Open to essentially being told by the prime minister that he was not welcome.

The tournament’s organizers confirmed that he had been granted a medical exemption after a review process by two independent panels. But that left unanswered whether the tennis player could enter the country for the tournament.

On Wednesday, Scott Morrison, the Australian prime minister, said that Djokovic would need “acceptable proof that he cannot be vaccinated.” He added, “If that evidence is insufficient, he won’t be treated different to anyone else and he’ll be on the next plane home.”

Context: Djokovic has long held nontraditional views of science and medicine — he once asserted that prayer and belief could purify toxic water.

Alan Turing in 1930. The code breaker was convicted of gross indecency.Credit…Sherborne School, via Associated Press

Prato della Valle, in Padua, is the largest public square in Italy, with a canal lined with statues surrounding an artificial island where residents love to stroll. The sculptures depict historical figures with ties to this northern Italian city. All 78 statues are of men. A proposal to include Cornaro Piscopia — the first woman to graduate with a university degree, obtained at the University of Padua in 1678 — has stirred a debate.

An NFT from the Barbie x Balmain collaboration, which also shows clothes that will be for sale.Credit…Mattel

The first high-fashion collaboration of the year is here: Balmain, the French luxury fashion house, and Barbie, the ultimate plastic doll. It’s not quite what you might expect, and it’s surprisingly good.

There is no doll involved. Instead, there is a 50-piece Barbie-inspired collection for grown-ups. Most pointedly, the unisex line erases the Ken-Barbie divide.

The collection is disarmingly appealing. It was designed with a dash of irony filtered through pink glasses and the giant grin of a boy who once felt he wasn’t supposed to play with dolls and has now been given free rein to reimagine the most popular one in the world.

“Having Barbie in my Balmain army, making a collection inspired by her where there are no boy clothes or girl clothes, is my small revenge,” said Olivier Rousteing, the creative director of Balmain.

He was speaking, he said, from personal experience — “as a kid, I did play with Barbies, and did feel some rejection for it”— which was the reason he was interested in taking his relationship with Mattel beyond the dress-the-doll phase.

This poppy-seed tea cake is a taste of a vanishing New York.

The Greek island of Crete has no lifts, no lodges, no trail maps — and great skiing, if you’re willing to work for it.

“A Hero,” the new film by the Iranian writer-director Asghar Farhadi, is a stressful, intricately plotted fable of modern life.

That’s it for today’s briefing. Thanks for joining me. — Whet

P.S. Jason Farago was honored with the inaugural Silvers-Dudley Prize for criticism and journalism.

The latest episode of “The Daily” is on the Jan. 6 Capitol riot.

You can reach Whet and the team at briefing@nytimes.com.

One Year Later, Assault Still Casts a Pall Over the Capitol and Its Occupants

N.F.L. Week 18 Predictions: Our Picks Against the Spread

Frank Dutton, Who Took On Apartheid’s Crimes, Dies at 72