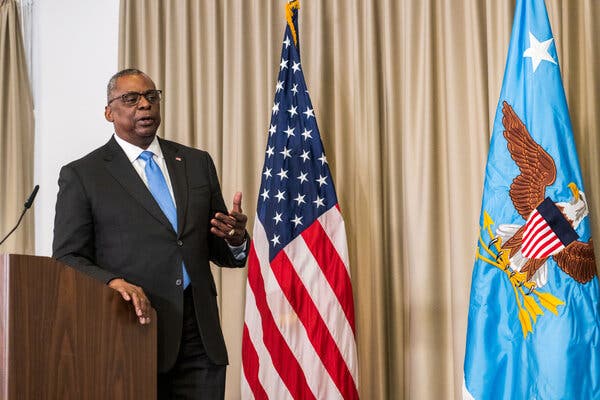 The U.S. has marshaled 40 allies to furnish Ukraine with long-term military aid in what could become a protracted battle against the Russian invasion. Defense officials from Australia, Belgium, Britain, Italy, Israel and other countries will meet monthly to ensure they “strengthen Ukraine’s military for the long haul,” said Lloyd Austin, the U.S. defense secretary. Follow the latest updates.

In a major policy shift, Germany said it would send up to 50 armored vehicles designed to shoot down aircraft but also fire at targets on the ground. The German government had previously cited a range of reasons to avoid shipping such heavy arms to Ukraine. It was among many signals yesterday pointing to further escalation in the war.

Russia’s foreign minister, Sergey Lavrov, said that the influx of heavy weapons from Western countries was effectively pushing Ukraine to sabotage peace talks with Moscow. He also reintroduced the specter of nuclear war, noting that the risks had increased because NATO had “engaged in a war with Russia through a proxy and arming that proxy.”

Response: Ukraine’s foreign minister, Dmytro Kuleba, called Lavrov’s remarks a sign that “Moscow senses defeat in Ukraine.” John Kirby, a Pentagon spokesman, said a nuclear war “cannot be won and it shouldn’t be fought.” He added: “There’s no reason for the current conflict in Ukraine to get to that level at all.”

Departures: More than five million people, 90 percent of them women and children, have left Ukraine since Russia invaded on Feb. 24. A further 7.7 million have been driven from their homes by the conflict but remain in the country.

In other updates from the war:

A makeshift testing site in Beijing on Tuesday.Credit…Kevin Frayer/Getty Images

Faced with a growing number of coronavirus infections, city officials in Beijing have ordered about three-quarters of the city’s population of 22 million to undergo three mandatory rounds of testing in five days, after recording several dozen new infections since Friday. Nearly four million people were tested on Monday alone.

In Shanghai, officials started testing on a similar scale only after infections had been recorded for weeks and more than 1,000 cases had emerged. The idea is to move faster with testing to understand how widely the outbreak has spread before seeking to impose restrictions on movement.

Officials have acknowledged that the highly contagious, stealthy Omicron variant had breached Beijing’s defenses and probably has gone undetected in the city for a week, particularly in the populous district of Chaoyang. Beijing officials urged residents to work remotely and suspended large-scale gatherings.

Panic buying: Concerns about a lockdown had prompted some to stock up on groceries, but stores still appeared well supplied. “Domestic goods are sufficient and supply is sufficient, please consume rationally,” blared a loudspeaker at one supermarket. “Do not overbuy, and do not believe and spread rumors.”

Solidarity among chaos: As the authorities in Shanghai fight to stamp out an Omicron outbreak, neighbors are turning to one another for support.

In other pandemic news:

Despite high oil and gasoline prices and with energy company profits to match, most U.S. oil businesses are not eager to capitalize on this moment by pumping more oil — or to help Europe end its fuel dependence on Russia, as some European leaders have promised. This deep-seated reluctance stands in contrast to how the oil industry has typically behaved when prices have surged.

The biggest reason oil production isn’t increasing is that U.S. energy companies and Wall Street investors are not sure that prices will stay high long enough for them to make a profit from drilling lots of new wells. Many remember the drastic drop in prices two years ago that forced companies to lay off thousands of employees, shut down wells and even seek bankruptcy protection.

International context: Saudi Arabia, the U.A.E. and other OPEC nations have also refused to pump a lot more oil since Russia’s war in Ukraine began in late February.

Piloting is a stubbornly monolithic profession: About 95 percent of airline pilots in the U.S. today are male. Nearly as many are white.

Now there’s urgency for the industry to act. Pilots are in short supply, and if airlines want to make the most of the thriving recovery from the pandemic, they will have to learn to foster lasting change.

The crowds are a bit thinner and there are fewer mega-yachts, but the Venice Biennale remains “art’s most combustible mixture of creative minds, spectacular wealth and a global culture stumbling its way toward the future,” our critic-at-large, Jason Farago, writes in a review.

The Biennale consists of a main exhibition of contemporary art, along with more than 90 pavilions where countries organize their own shows. This year’s main show revolves around surrealism, cyborgism, and animal and plant life, and the majority of its participants are women. It’s “a coherent and challenging show, whose optimistic vision of emancipation through imagination feels very rare nowadays.” Jason writes.

A few highlights from the national presentations: Stan Douglas of Canada used photography and video art to delve into the intersecting uprisings of 2011 (the Arab Spring, Occupy Wall Street, the London riots). And Małgorzata Mirga-Tas, a Roma artist, created a 12-part tapestry stitched with imagery of Romani migration and everyday life.

Add gnocchi to braised greens to turn a side dish into a vibrant one-pot meal fit for weeknights.

A son must save his mother in “Luzifer,” an ambitious German thriller that tackles questions of religious fanaticism and capitalist greed.

The latest episode of “The Daily” is on masks.

Tags
Had Oil Russia That Ukraine

Robinhood says it will lay off 9% of its employees.