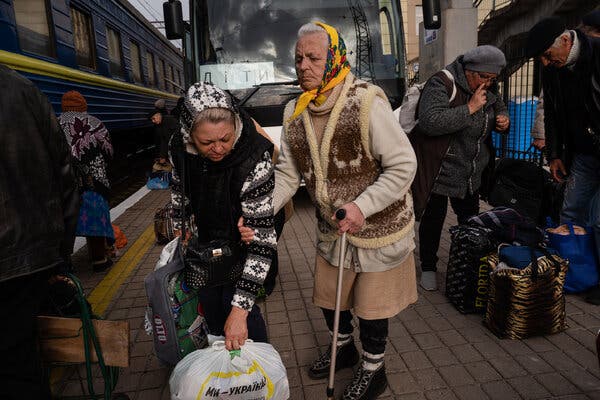 A Ukrainian woman led her blind mother aboard an evacuation train in Pokrovsk, in the Donbas region of Ukraine.Credit…Lynsey Addario for The New York Times

More than two months into the war in Ukraine, Russia is making some significant territorial gains, even as its invasion has been marred by poor planning, flawed intelligence, low morale and brutal, indiscriminate violence against civilians. Follow the latest updates from the war.

Russian forces have advanced to the border between Donetsk and Luhansk, according to the Russian defense ministry — provinces where Moscow-backed separatists have been fighting Ukraine’s army for eight years. If confirmed, the news makes it more probable that Russia could entirely control the region, known as the Donbas, compared with just a third of it before the invasion.

If Russia can hold on to, or expand, the territory it occupies in the south and east, and maintain its dominion in the Black Sea, it could further undermine Ukraine’s already battered economy, improve Moscow’s leverage in any future negotiated settlement and potentially expand its capacity to stage broader assaults.

Did the Fed act too slowly on inflation?

Some Federal Reserve officials have begun to acknowledge that the central bank was too slow to respond to rapid inflation last year, a delay that is forcing it to constrain the economy more abruptly now.

Officials had spent years dealing with tepid inflation, which made some hesitant to believe that rapidly rising prices would last. It became clear in early fall that fast inflation was persisting — but the Fed pivoted toward rapidly removing policy support only in late November and did not raise rates until March.

As high prices have lingered, inflation expectations have been creeping up, threatening to change spending behavior in ways that perpetuate the problem. If the Fed continues to rapidly adjust policy, policymakers risk slamming the brakes on a speeding economy. Such hard stops can hurt, pushing up unemployment and possibly tipping off a recession.

Analysis: “It was a complicated situation with little precedent — people make mistakes,” said Randal Quarles, the Fed’s vice chair for supervision in 2021. He argued that the central bank should have begun to aggressively pull back support after September.

Biden’s response: With rising prices threatening to hurt Democrats in the midterm elections, the president scolded Republicans for blaming him for rising inflation while offering “extreme” policy ideas that he said would help the wealthiest Americans and big corporations. Inflation was his “top domestic priority,” he added.

A protest in Turin, Italy, in 2020 supporting Ahmadreza Djalali.Credit…Tino Romano/EPA, via Shutterstock

Iran’s judiciary said yesterday that it would carry out the execution sentence of Ahmadreza Djalali, an Iranian-Swedish scientist accused of spying for Israel and aiding its assassination of Iranian nuclear scientists. Djalali has denied all the charges.

The announcement coincided with the conclusion of a court case in Sweden where a former Iranian official, Hamid Nouri, was tried for crimes against humanity. Swedish prosecutors have asked for a life sentence for Nouri for his role in the execution of 5,000 dissidents in the 1980s. He has denied the charges.

Human rights groups condemned Iran for what they called its pattern of hostage diplomacy, in which dual nationals or foreign nationals are detained on trumped-up charges of espionage and then leveraged politically to release frozen funds or be exchanged for Iranian citizens incarcerated in other countries.

Quotable: “The Iranian judiciary, by announcing its intention to execute Djalali, has made it clear that he is a hostage and his life is being used to influence the judicial decision in Sweden,” said Hadi Ghaemi, the director of the New York-based Center for Human Rights in Iran.

Background: Djalali, a 50-year-old lecturer at the Karolinska Institute in Stockholm, migrated to Sweden in 2009 to study for a doctoral degree. He traveled to Iran in 2016 after a university invited him to participate in an academic workshop, then was arrested.

News From the U.S.

Phalloplasty — the surgery to make a penis — has become more sought-after among trans men. But with a steep rate of complications, it remains a controversial procedure.

For The Times Magazine, the writer Jamie Lauren Keiles spent a year with Ben Simpson, above, as he underwent gender-affirming surgeries. From start to finish, Ben’s penis took four years to complete.

Credit…Sang An for The New York Times

Eggs do it all

The humble egg is something of a miracle. Within its shell lies almost infinite possibilities — midnight snack, breakfast or dinner, working across cultures, cuisines and cravings. The food scientist Harold McGee described it as “one of the kitchen’s marvels, and one of nature’s.” For Eric Kim, a cooking writer for The Times’s Food section, an egg is “a magician.”

Eggs can summon intense emotions, whether you are Eric’s 10-year-old rescue dog, who will at times be roused only by the promise of a boiled egg, or a member of L’Association de sauvegarde de l’œuf mayonnaise — a society that works to a “safeguard” this classic French dish of boiled eggs under a blanket of silky mayo.

From our Food section, peruse Eric’s selection of 24 recipes that showcase the immense versatility and possibility of a simple egg. Learn the secret to the creamiest scrambled eggs — it may be sitting in your pantry right now — or ascend to the summit of eggs for dinner with a riff on shakshuka. To finish, attempt culinary poetry with this caramel-laden Iberian flan.

Whichever egg option you choose, pair it with this very old joke:

Q: Why do the French have only one egg for breakfast?
A: Because one egg is “an œuf!*”

Ghosts and guilt plague a grief-stricken widower in “Shepherd,” a moody horror movie from the Welsh director Russell Owen.

In “Liberalism and Its Discontents,” the political theorist Francis Fukuyama offers a stout defense of liberalism against threats from left and right.

The latest episode of “The Daily” is on Victory Day in Russia.

*The French for an egg is “un œuf,” which sort of sounds like “enough.” You can reach Natasha and the team at briefing@nytimes.com.

Leonid Kravchuk, the first president of an independent Ukraine, dies at 88.

Manchester City Had the Money. Haaland’s Team Had the Plan.