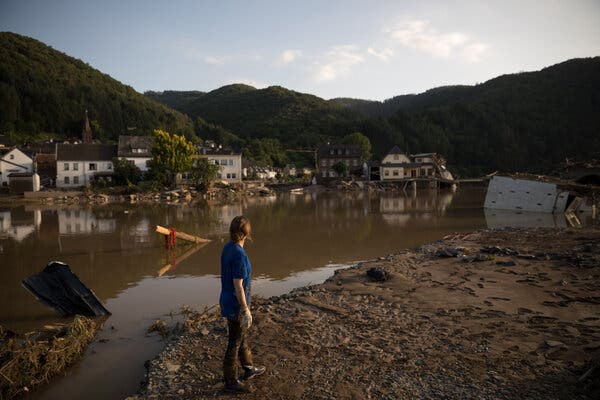 Flooding in Germany in July. Credit…Gordon Welters for The New York Times

A path to dangerous warming

Ahead of a major U.N. climate summit in Glasgow next week, several governments have updated their pledges under the Paris climate agreement to do more to curb their planet-warming emissions by 2030. The plans fall far short of what’s needed to avert a dangerous rise in global temperatures, a new U.N. report said.

Even were those promises met, the world would be on track to warm roughly 2.7 degrees Celsius by 2100 compared with preindustrial levels, the report found. That broadly aligns with what outside analyses have found. That much warming would drastically increase the risk of heat waves, droughts, flooding and wildfires across the globe in years to come, scientists have warned.

It is also unclear whether every country will live up to its pledges — the report found that many governments still haven’t put in place policies or laws to achieve their goals. The E.U. for instance, has proposed sweeping new climate legislation, some of which has yet to be approved by all 27 member states.

Quotable: “The world has to wake up to the imminent peril we face as a species,” said Inger Andersen, the executive director of the U.N. Environment Program.

Dariusz Sikorski, the county chief of Kobylin-Borzymy, Poland, in his office.Credit…Maciek Nabrdalik for The New York Times

A looming threat of a Polish exit from the E.U.

The conservative Polish government in Warsaw is wrestling with tensions between nationalist instincts suffused with religious faith and the reality of economic and political self-interest. The country is locked in a tumultuous struggle with the E.U. over the rule of law that has raised the possibility of the country being forced to leave the bloc.

At the heart of the tension is a ruling this month by Poland’s constitutional tribunal that challenged the primacy of European law. Senior officials in Brussels and European politicians have denounced the ruling as an intolerable threat to the foundations of the union that cannot stand if Poland wants to stay a member.

Unlike Britain, where hostility to the E.U. was long a powerful force in domestic politics, Poland has never had a significant lobby pushing for it to withdraw. Since the country joined the union in 2004, it has received more than $225 billion from other members. Public support for staying in the union is at nearly 90 percent, according to opinion polls.

Consequences: Warnings that Poland is jeopardizing its E.U. membership have created problems for the government as it looks ahead to the 2023 elections. “There is no other option for us except Europe,” said one voter. “The only alternative to Brussels is Moscow. And we already know what this is like.”

Students returned to school in Los Angeles in August.Credit…Allison Zaucha for The New York Times

Pfizer vaccine recommended for children in the U.S.

A key U.S. advisory committee voted to recommend that a pediatric dose of the Pfizer vaccine be offered to 5- to 11-year-olds. Shots could be offered as early as next week.

Since the pandemic began, nearly two million children between the ages of 5 and 11 in the U.S. have been infected with Covid-19 and 8,300 have been hospitalized, a third of whom have needed intensive care. Nearly 100 have died. Covid-19 is now one of the top 10 causes of death among children in that age bracket in the U.S.

Officials hope that the pediatric dose can help close a major gap in the U.S. vaccine campaign. If the Food and Drug Administration grants authorization, about 28 million children will become eligible. Only the youngest, children under 5, would remain uncovered. Here’s what happens next.

Equity matters: Covid hospitalization rates in the 5-to-11 age group are three times as high for Black, Hispanic or Native American children as for white children, a viral diseases specialist said.

Opinion: You’ll want to vaccinate your children against Covid-19 for the same reasons you use seatbelts and car seats, writes Lee Savio Beers, the president of the American Academy of Pediatrics.

A legal battle is raging in France over manuscripts by the writer Louis-Ferdinand Céline that recently re-emerged after almost eight decades. The papers had been squirreled away to prevent an “antisemitic family” from profiting from the trove, their finder said, prompting a lawsuit from the writers’ heirs.

The discovery and accusations of theft have set off a new reckoning in France about Céline, an incontestably great novelist who also embraced the collaborationist government that sent many French Jews to Nazi death camps.

The case against Winston Churchill

In his new book, “Churchill’s Shadow,” the journalist and historian Geoffrey Wheatcroft attempts to recast the many memorials and books devoted to Britain’s iconic World War II leader.

“Churchill, in this telling, was not just a racist but a hypocrite, a dissembler, a narcissist, an opportunist, an imperialist, a drunk, a strategic bungler, a tax dodger, a neglectful father, a credit-hogging author, a terrible judge of character and, most of all, a masterful mythmaker,” writes Peter Baker, the chief White House correspondent for The Times, in this review.

Though Wheatcroft insists the book is not a “hostile account,” it gives a withering assessment of the former prime minister’s life, his efforts to airbrush his legacy and the so-called Churchill cult that emerged after his death.

“If I make much of Churchill’s failures and follies,” he writes, “that’s partly because others have made too little of them since his rise to heroic status.”

Try this sheet-pan meal of roasted chicken and pears.

What’s the best way to help to prepare a child who is afraid of needles for a Covid-19 vaccination?

Kwon Yeo-sun’s “Lemon,” the tale of a murder told from three perspectives, is “a bright, intense, refreshing” story you can finish in one sitting, our reviewer writes.

Here’s today’s Mini Crossword, and a clue: “To be,” in Latin (four letters).

That’s it for today’s briefing. See you tomorrow. — Natasha

P.S. Our international president, Stephen Dunbar-Johnson, spoke to The Glasgow Times about The Times’s Climate Hub at COP26.

The latest episode of “The Daily” is on the Biden administration’s efforts to expand the U.S. social safety net.

New Zealand will expand its vaccine mandate to cover 40 percent of workers.