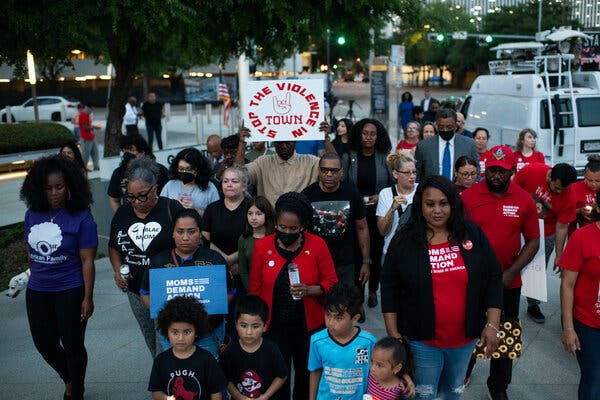 A prayer vigil in Houston.Credit…Mark Felix for The New York Times

The horrific school shooting yesterday in Uvalde, Texas, has ramped up the intensity of the national debate over gun control and the emotions around it.

The gunman killed 21 people, including 19 children, making this the deadliest shooting at a U.S. elementary school since the 2012 attack at Sandy Hook Elementary in Newtown, Conn. Because he turned 18 this month, the gunman was able to legally purchase two AR-15-style rifles in Texas, The Houston Chronicle reported.

Soon after the shooting, the Senate majority leader, Chuck Schumer, moved to clear the way to force votes on legislation that would strengthen background checks for gun buyers. Senator Mitch McConnell, the minority leader, said he was “horrified and heartbroken” by the shooting. But he and other Republican lawmakers gave no signal that they might drop their longstanding opposition to tighter gun laws, even though polls show that Americans overwhelmingly support such measures.

With the Senate divided 50-50, any legislation on guns would have to draw the support of all Democrats and at least 10 Republicans to advance. The Democratic Senator Joe Manchin has said he still supports the legislation on background checks that he and the Republican Senator Pat Toomey introduced after Sandy Hook, but yesterday he said he did not favor eliminating the filibuster to pass such a bill.

Here is how the latest mass shooting is likely to reverberate in Washington and elsewhere:

“The gun manufacturers have spent two decades aggressively marketing assault weapons, which make them the most and largest profit,” Biden said in a speech to the nation yesterday. “For God’s sake, we have to have the courage to stand up to the industry.” This could be the mass shooting that leads to significant change — or it could join the long list of other atrocities that have been followed by policy stalemates.

Here are some ways to help the victims of the shooting in Uvalde.

The Biden administration blocks Russia from paying American bondholders. The move increases the likelihood of the first default of Russia’s foreign debt in more than a century. Meanwhile, fighting is intensifying in Ukraine’s Donbas region, whereUkrainian officials say they expect a devastating siege in Sievierodonetsk, the easternmost city still under Ukrainian control.

One in five adult Covid survivors in the U.S. may develop long Covid. A large study by the Centers for Disease Control and Prevention, which evaluated electronic medical records for nearly two million people, found that the most common post-Covid conditions, regardless of age, were respiratory problems and musculoskeletal pain.

Glencore will pay $1.1 billion to settle bribery and price-fixing charges. U.S. prosecutors said the settlement with the mining and commodity-trading giant followed a “multiyear scheme to manipulate benchmarks used to set prices for oil at two of our country’s busiest ports.”

Two candidates in Georgia beat Trump-backed challengers. Gov. Brian Kemp trounced David Perdue in a victory that represented a resounding rebuke of former President Donald Trump. The victory sets Kemp up for a rematch with Stacey Abrams. In the secretary of state race, Brad Raffensperger, the Republican incumbent, averted a runoff against Representative Jody Hice.

The U.K. approves the sale of Chelsea F.C. to a U.S.-led investor group. The British government approved the $3.1 billion sale of the soccer club after receiving assurances that none of the proceeds would go to its Russian seller, Roman Abramovich, who hurriedly put his team on the market three months ago, almost as soon as Russian troops crossed into Ukraine.

A16Z doubles down on crypto

The venture capital firm Andreessen Horowitz has bet big on crypto through market ups and downs. But nothing like this.

With the cryptocurrency market reeling — after the collapse of a so-called stablecoin helped tank the price of Bitcoin and wiped out $300 billion in value from the broader crypto economy — the firm announced this morning that it was launching its fourth and biggest crypto fund, dedicating $4.5 billion to blockchain investments. “This speaks to the size of the opportunity,” Arianna Simpson, a general partner at the firm, told DealBook. “We’re excited to double down.”

The new fund will bring the firm’s total crypto investment to $7.6 billion. About $1.5 billion of the fund will go to seed investments, and $3 billion to venture bets, backing projects of all kinds from infrastructure to middleware to consumer apps.

Andreessen Horowitz, often called A16Z, believes the internet can be improved by creating a new layer of infrastructure known as web3, built on blockchain technology and fueled by cryptocurrencies. Believers say it will transform commerce and finance, allowing users to transact without intermediaries, get paid for participation and help govern companies.

The firm is concerned that the recent crash will spur officials to enact regulations that could crimp crypto’s growth, Simpson said. Andreessen Horowitz started a lobbying effort last year to help make its case in Washington.

“Other issues that concern all of humanity — fighting pandemics and climate change, avoiding nuclear war, maintaining global institutions — have had to take a back seat to that struggle. That’s why I say our civilization may not survive.”

— The billionaire financier George Soros, speaking about the war in Ukraine yesterday at the annual meeting of the World Economic Forum. Soros said Russia’s invasion “may have been the beginning” of World War III.

When former President Donald Trump’s social media company and its merger partner announced in December that they had rounded up $1 billion in additional private funds for the deal, it set off speculation about the identities of the investors.

Now, a draft document shared with The Times’s Matthew Goldstein sheds some light. The investors are mostly a mix of small to midsize hedge funds based in the U.S. and Canada. The hedge funds Pentwater Capital and Sabby Management are two of the bigger investors in the private placement, as previously reported by The Times. Funds associated with Pentwater, a $10 billion hedge fund based in Naples, Fla., stand to get the largest number of shares through the deal, according to the draft document.

At the moment, Trump Media — which hired former Representative Devin Nunes, a staunch Trump ally, as chief executive in December — has no disclosed revenue, and its social network has struggled to gain traction. Two people briefed on the matter said a final version of the draft was expected to be filed with regulators tomorrow, although the timing could change.

Trump Media’s bankers told potential investors that those willing to put up at least $100 million would get a call from Mr. Trump, according to five people who were briefed about the pitches but were not authorized to speak publicly.

Biscotti So Good They Made Me Cry