Stetson Bennett, a University of Georgia quarterback, spent last summer not all that sure what to make of a freshman named Brock Bowers.

Bowers was certainly speedy for a tight end. He had a conspicuous work ethic and had enrolled early. How he would fare, though, in the grinding glare of Southeastern Conference football was anyone’s guess.

No. 3 Georgia reached the College Football Playoff championship game with one of the nation’s most uncompromising defenses. But to conquer top-ranked Alabama on Monday night in Indianapolis, Georgia will need some splashes of offensive wizardry, and Bowers, who played high school football in California’s wine country, may be its best bet.

No longer largely relegated to the anonymity of blocking, today’s college tight ends can be among the most fearsome receivers on the field, with their towering heights and surprising speeds creating defensive heartburn. They are often receivers who later master blocking, not mere extensions of the offensive line who are abruptly tutored in the art of catching passes.

“Your tight ends 10 years ago, they put their hand in the ground and ran a few routes here and there,” said the University of South Carolina’s head coach, Shane Beamer, who formerly presided over Georgia’s tight ends. “Now all the tight ends nowadays, they basically do what receivers do — and then they block a little bit.”

Bowers will enter Monday’s game with 846 receiving yards this season — no other Bulldog has more than 469 — on 52 catches. A dozen of those receptions were for touchdowns, a team record for a pass-catcher in a single season. When the Bulldogs met Alabama last month in the SEC title game, which Georgia lost, 41-24, he caught 10 passes for 139 yards and a touchdown. 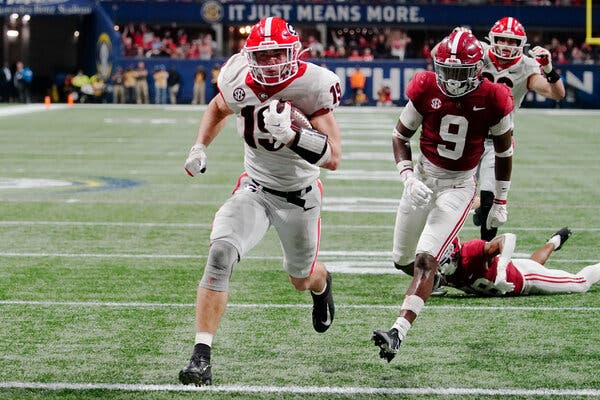 Brock Bowers had a touchdown against Alabama in the Southeastern Conference championship game.Credit…John Bazemore/Associated Press

“This guy is one of the premier players in college football,” said Nick Saban, Alabama’s defensive-minded head coach. “I know he’s just a freshman, but this guy’s got great size, he’s a good blocker, he’s physical, he’s tough and he’s got wide receiver skills in every way, shape or form.”

Much of Georgia’s need for Bowers to catch passes can be traced to an onslaught of injuries that depleted the team’s offensive ranks this season. His debut on his sport’s biggest stage, though, is also coming after the N.F.L.’s obsession with electrifying tight end play took greater root in college football.

Indeed, when Georgia Coach Kirby Smart was a senior defensive back in Athens in 1998, the Bulldogs had two of the SEC’s five most productive tight ends. Those five averaged 300 receiving yards each that season.

The tight end position now is as valuable as a terrific fullback used to be, said Sam Pittman, the head coach at Arkansas, who has been around college football for more than 30 years.

D.J. Williams, who was named the country’s best collegiate tight end when he played for Arkansas in 2010, compared his contemporary successors to a queen in chess.

Alabama has not relied on its tight ends to catch passes as much as Georgia has this season. Cameron Latu has 308 receiving yards, and Jahleel Billingsley has 256. Then again, the Crimson Tide’s star wide receiver, Jameson Williams, picked up 1,507, and Alabama had fewer offensive gaps to fill urgently. (Injuries aside, Alabama’s quarterback, Bryce Young, won the Heisman Trophy; Georgia spent much of December facing questions about whether Bennett was the right fit to lead its offense.)

“We’ve got a guy who has proven he can go for 150 yards against elite defenses and a couple of receivers who have proven they can get open whey they need to,” said Preston Dial, an Alabama tight end from 2007 to 2011, Saban’s first four seasons there. “Coach Saban’s always got a few plays in there to highlight the tight end if we need him, but it’s playing with the pieces you have, and we have guys who can get open.”

But Smart, a Saban protégé who had already emerged as a vocal champion of tight ends — “We want as many as we can get and we want to get them the ball,” he said in 2020 — and the offensive coordinator Todd Monken saw their offensive options narrow as Georgia’s injuries mounted.

Georgia had aggressively pursued Bowers when he was a prospect in Napa, Calif., where he was a tight end, tailback, wide receiver, linebacker and kick returner. As a high school sophomore, when he was just an inch shy of the 6-foot-4 he is now, his 40-inch vertical leap and a 40-yard dash time of 4.55 seconds turned heads. In addition to Georgia, he said, he had fielded offers from Louisiana State, Michigan, Notre Dame, Oregon and Texas A&M, among others.

He announced his commitment in August 2020. In 2021, Georgia said in its preseason media guide that he “should contend for playing time as a freshman.” Then injuries made him a star of the entire offense.

“We knew he had the run-after-catch ability — we saw that on tape, they used him in the backfield out of high school — but he’s got a little more range than we thought and he’s continued to develop as a route runner,” Monken said before the Orange Bowl in Miami Gardens, Fla., where Georgia pounded Michigan, 34-11, to advance to the title game.

Bowers left the semifinal game in the first half with shoulder trouble. Smart said it would not be a limitation on Monday night. Before his exit, though, Bowers scored a touchdown.

“He’ll play the Z, the Y, the X, the move guy, the down guy,” said Mike Macdonald, Michigan’s defensive coordinator. “They’ll give it to him on reverses, screens.”

With safeties and linebackers often flummoxed, an easier way to challenge a sterling tight end, coaches across the country said, can be to focus more on thwarting the quarterback and disrupting that half of the equation. The trouble with that approach, they said, is that the quarterback-tight-end tandem is often the savviest, most adept duo on the field, and rival coaches said that Bennett’s skills were often underappreciated.

“You’ve got to be able to mix it up and double them sometimes and bang him, play some zone, get some bigger guys on him sometimes if the push-off is an issue,” said Golding, who suggested that no team playing Georgia could afford to “design everything to take 19 away because they’re going to hurt you somewhere else.” (Bowers wears No. 19.)

Dial, who accrued 318 receiving yards during his Alabama career, laughingly confessed to envy about how Georgia had been forced to use Bowers.

“He reminds me a lot of me: I was undefeated at catching the ball when I was wide open,” he said before adding: “He’s a clutch player. He understands how to get open. I’m jealous of his talent. I’m jealous of the offense he’s in.”

And although having an offense hinge so much on a single tight end may be unusual, coaches expect that the position’s swelling significance throughout college football will stick for the foreseeable future.

Larry Scott, the Howard head coach, who previously oversaw tight ends at two SEC schools, Florida and Tennessee, has long anticipated an era when the position he called “the combination of two pieces to the puzzle” would take a turn in the sport’s spotlight.

“It’s been steady,” he said of the role’s evolution, “but it’s about time that that position group is being glorified for what they bring to the game.”

What Does a Forehand Winner Sound Like? Clink, Blip-Blip-Blip!

N.F.L. Playoff Predictions: Our Picks for the Conference Championships