“The financial resources of the football team were astounding,” said Folger, who marveled at the collegiate-level facilities, equipment, provided apparel and training services.

“Our softball field was horrible; a girl broke her ankle stepping in one of the many holes in the outfield,” she said. “We didn’t have protective barriers in front of the dugouts, the foul lines were washed out and the grass was nonexistent in some parts. Meanwhile, the boys’ baseball field had a beautiful press box, fantastic dugouts and a $10,000 pitching machine.” 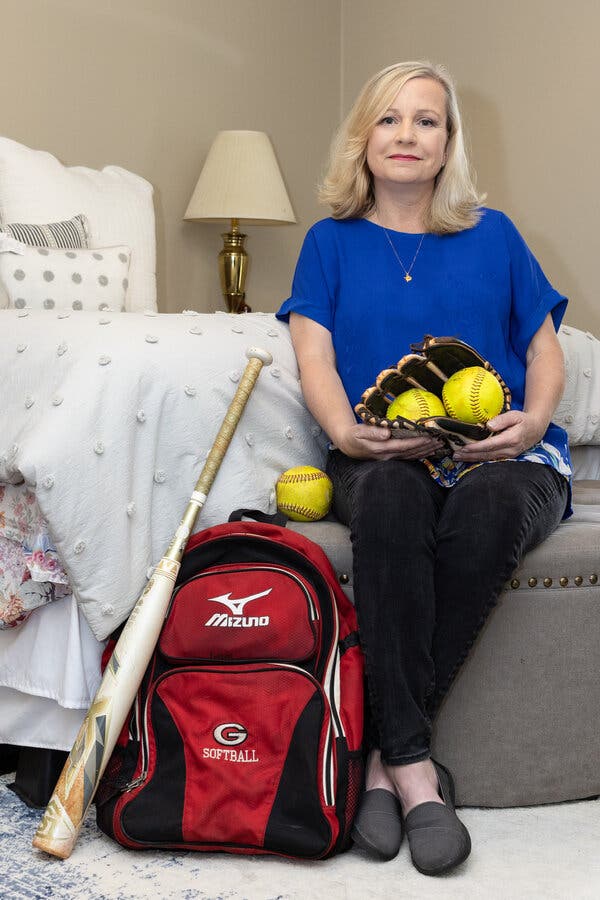 Folger complained to Gainesville school district officials, but when improvements were not made, she did something numerous aggrieved parents throughout the United States have been doing for more than 20 years. Spurred by the protection offered by the 1972 legislation known as Title IX, she filed a federal lawsuit that accused the school district of discriminating against the girls who played high school softball.

The lawsuit ended with a common resolution: The Gainesville school district settled by spending about $750,000 to upgrade the softball facility, while also paying for Folger’s attorney fees, according to a district spokeswoman.

“We got a new press box, concession stand, dugouts, a completely renovated playing surface, new lighting, new bleachers, new scoreboard, new netting around the facility — basically a brand-new stadium,” Folger said of the 2017 settlement. “And we got the guarantee that going forward, any facility improvements at the baseball field would be mirrored at the softball field.”

Much discussion about the effects of Title IX, signed June 23, 1972, by President Richard M. Nixon, has focused on inequities in colleges and universities. But the impact of the law over 50 years sprawls even more widely across thousands of high schools and middle schools, demanding grass-roots opportunities for millions of young female athletes. Yet at local schools, enforcing Title IX has most notably come through lawsuits — or the threat of one — driven by the families of students.

That has done more than feed the sports pipeline for colleges and universities. Those in the trenches of the fight for Title IX compliance say it has been empowering and has created advocates for women’s sports based on personal experience.

The lawyer Sam Schiller has been working on Title IX lawsuits around the country for more than 25 years.Credit…Brett Carlsen for The New York Times

As Sam Schiller, whose one-lawyer Tennessee firm has filed Title IX lawsuits against school districts in more than 30 states and never lost a case, said: “We’re now at the point where women who were high school athletes are raising families, and they definitely know their daughters are supposed to have what the men have had all along. It’s Title IX 2.0.”

The landmark gender equality legislation, which was signed into law in 1972, transformed women’s access to education, sports and much more.

Folger added: “I was never a bra-burning feminist. But I was able to show my daughter that she can stand up for herself and not be treated as someone lesser or not equal.”

Tracking the number of federal lawsuits related exclusively to sex discrimination in school athletics — as opposed to Title IX disputes involving discrimination in educational opportunities or sexual harassment — is difficult. But lawsuits are not the only way to measure how proactive parents have become about using Title IX to preserve their children’s athletic rights.

At the federal Department of Education, the agency responsible for enforcing Title IX, the number of complaints involving sex discrimination in athletics from kindergarten to 12th grade has outpaced those involving colleges by 40 to one since January 2021, according to an Education Department spokesman. The vast majority of the more than 4,000 complaints in that period were filed by individuals rather than groups.

The push for equal access to sports for boys and girls in high schools comes as overall participation for girls has exploded since the law took hold. In 1971, there were 294,015 girls playing high school sports nationwide, which represented 7 percent of all high school athletes, according to the National Federation of State High School Associations. In 2018-19, the last full season that the federation was able to survey schools because of the coronavirus pandemic, there were more than 3.4 million girls participating in sports, 43 percent of all high school athletes.

There are, however, several impediments to making sure schools comply with the law.

One is knowing that it exists. A March survey by Ipsos and the University of Maryland of more than 1,000 parents and more than 500 children ages 12 to 17 found that more than half of the parents and nearly three-fourths of the children had not heard of Title IX.

Another major obstacle is misinformation. At many high schools, for example, the quality of the facilities, training opportunities and even coaching salaries are buttressed by sport-specific booster clubs funded by the parents of athletes and local sponsors, who often raise tens of thousands of dollars to support a single sport. Most frequently, that kind of money is used to elevate football, boys’ basketball and baseball.

If that funding causes a disparity between what is spent on similar boys’ and girls’ sports, booster club leaders typically argue that they are a private entity outside the purview of school district officials — and therefore not obligated to comply with Title IX.

The law, however, holds school districts responsible for the money and other resources funneled toward each team, regardless of the sources. District leaders are obligated to ensure that the athletic experience stays equitable for girls and boys even with independent financing. And that experience goes beyond fields and facilities, encompassing details like staffing, game and practice schedules, and transportation arrangements.

In the end, a large percentage of high schools, perhaps even the majority, remain noncompliant with Title IX regulations, according to the leaders of multiple state high school associations. But gradually, progress has been made, and notably, Title IX clashes have rarely led to the elimination of boys’ high school teams to help achieve gender equity — a divisive decision that scores of colleges have made for decades.

Sam Schiller displayed plans for a softball field at his home office in Tennessee.Credit…Brett Carlsen for The New York Times

Schiller handled his first Title IX athletic lawsuit in the mid-1990s, not long after graduating from law school, when such cases were uncommon. Schiller’s practice is now entirely dedicated to cases involving sex discrimination of high school or middle school athletes.

Not one of his hundreds of cases has gone to trial, the soft-spoken Schiller said. And he believes a new breed of school district leaders are more educated about the rights that Title IX protects. He said that for a recent case, he toured a school’s facilities for boys’ and girls’ teams with a newly hired superintendent, a woman who had been a high school athlete.

After the tour, Schiller said the superintendent told him, “I know what this is supposed to be, and we’re going to make this equivalent.”

Schiller added, “For whatever reason, it takes federal court to get their attention and make them realize they have to do this.”

Schiller also cautions families to expect pushback, even hostility, in the community when they file lawsuits against school districts.

“Once news of my lawsuit got out, people started calling me the troublemaker — they thought I was destroying Gainesville athletics,” Folger said. “There are probably people still grumbling about me behind my back.”

Jennifer Sedlacek and her daughter, Taylor, in front of the Bennington High School softball field.Credit…Chris Machian for The New York Times

Jennifer Sedlacek, who lives in Bennington, Neb., felt a similar backlash when she and two other families in her community filed a federal lawsuit against their school district for discriminating against their daughters’ teams.

“When news of the suit got out, it rocked our small town,” said Sedlacek, whose daughter, Taylor, played softball and basketball. “It divided the town because people thought it was going to impact boys’ sports, which is not true. People would give you this look and they won’t really talk to you anymore.”

Folger said the stigma of being the person in a community who sued the school district over discrepancies in boys’ and girls’ sports has probably kept thousands of parents across the country from filing a Title IX lawsuit. In her case, she could not get another Gainesville family of a softball player to join her suit as a co-plaintiff.

“They were worried their husband might have problems at work over the suit or they were apprehensive about people being mad at them,” Folger said. “It frustrated me because I was thinking: What about your daughter? What are you teaching her? You’re worried about what someone is going to say to you and you’re teaching your daughter to be meek and mild? That’s the wrong message.”

Sedlacek did have co-plaintiffs. They rallied parents from a variety of girls’ sports at their high school to highlight numerous discrepancies between how boys’ and girls’ teams were treated. They criticized unequal access to weight lifting rooms, a lack of athletic trainers and the use of portable toilets without running water at the softball field, a particularly sore subject for the athletes and their parents.

The parents also started a website in support of the lawsuit and organized a drive to sell T-shirts they had made that were embossed with the Roman numerals IX. Athletes from girls’ teams wore the T-shirts to school and to a town board meeting. The case drew attention in the local news.

“When you’re in a lawsuit you can’t really say anything, but the girls were out there being vocal and trying to educate people,” Jennifer Sedlacek said. “It wasn’t always easy for them because when you’re an athlete, most of your friends are boys athletes and then the administration is mad at you, too. But I was really proud they persevered.”

The Bennington High School softball field sits next to the football field.Credit…Chris Machian for The New York Times

The lawsuit against the Bennington schools was filed in February 2021 and settled six months later. Improvements to the girls’ softball field were quickly made. Uniforms for the girls’ basketball and softball teams were upgraded as were other amenities for multiple girls’ teams. New restrooms were added to the softball field.

“That construction got started really fast, and the field got completely redone; it looks amazing,” Jennifer Sedlacek said.

Taylor Sedlacek, who will play softball at Wichita State next season, attended last year’s Women’s College World Series, the final portion of the N.C.A.A. Division I softball tournament, in Oklahoma City with her mother. The parents of 14 players in the tournament had been clients of Schiller and his former partner, Ray Yasser, who is retired.

“I thought that was a proud statement — to know that 14 of those girls, they did have Title IX at work for them,” Jennifer Sedlacek said. “Maybe that’s how those girls got their opportunity to get that far in their careers. It took somebody to stand up for them.”

Tony Siragusa, a Defensive Lineman Known as Goose, Dies at 55

The Players to Watch at the Scottish Open

For the Scottish Open, the Renaissance Club Toughens Up

What’s the Most Curious and Fraught Job in Tennis?

The Knicks Stumbled Last Season. Here’s How They Can Recover.