CIBOLO, Texas — A Black conservative and a rising star in the Republican Party, Wesley Hunt is almost certain to be elected to Congress this fall in a majority-white district in and around Houston.

The district is new, one of two added in Texas after the 2020 census, and was drawn in large part for Mr. Hunt, an example of Republican lawmakers crafting safe seats out of Texas’ diversifying suburbs rather than going after incumbent Democrats.

That safety has enabled Mr. Hunt, a regular on Fox News supported by top Republicans like Representative Kevin McCarthy of California, to focus his attention on something bigger than his own election: his conviction that the Republican Party needs more conservatives who look like him if it is going to survive.

“Diversity in the Republican Party is not the best,” Mr. Hunt, 40, said in an interview. “If you don’t have people like me, and women, step up and say, actually, it’s OK to be a person of color and to be a Republican, then we’re going to lose the next generation.”

Mr. Hunt has been traveling far beyond his Texas district, raising money and giving support to conservative Black and Hispanic candidates, and talking frankly about the need for Republican officeholders to better reflect the nation’s changing demographics. He is part of a growing Republican effort to diversify its roster of candidates and undercut Democrats among voters they have long counted on. 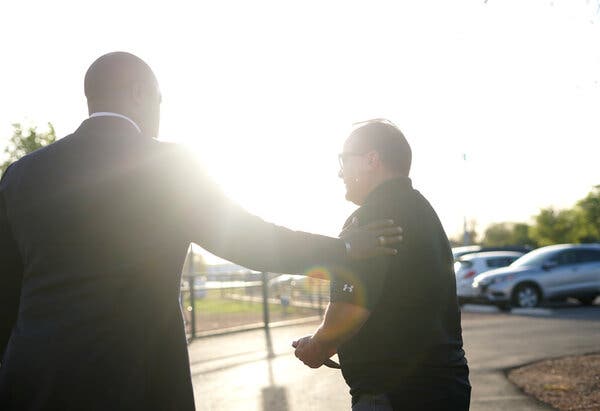 The district Mr. Hunt is running in is an example of Republican lawmakers crafting safe seats out of Texas’ diversifying suburbs rather than going after incumbent Democrats.Credit…Christian K. Lee for The New York Times

On a recent evening, Mr. Hunt showed up more than two hours west of Houston at a political event for a young Hispanic woman, Cassy Garcia, in the town of Cibolo, a Republican area in the fast-changing farmlands outside San Antonio. Ms. Garcia is running in a longstanding Democratic district held by Representative Henry Cuellar that runs from around San Antonio down to the border with Mexico.

“He was very interested in our race,” said Ms. Garcia, a former aide to Senator Ted Cruz. “It means everything that Wesley is invested.”

Mr. Hunt introduced himself to the mostly white audience and went over his background — West Point graduate, Apache helicopter pilot, staunch conservative — speaking loudly to the small crowd under a corrugated metal roof as if projecting into a room far larger than the cinder block bar he found himself in.

The stop at Ms. Garcia’s event in Cibolo was part of Mr. Hunt’s effort to support a diverse slate of upstart Republican candidates like John James in Michigan, Jeremy Hunt in Georgia and Jennifer-Ruth Green in Indiana. Each of those candidates, like Ms. Garcia, faces a considerably more difficult race this fall than Wesley Hunt does.

“He believes in helping to change the face of the G.O.P.,” Tim Edson, a political consultant on Ms. Green’s campaign, said of Mr. Hunt. “I also think he recognizes that by helping others, it can help him hit the ground running and be effective in Congress.”

If Mr. Hunt wins, as expected, he would be the third Black Republican in the House, joining Representatives Byron Donalds in Florida and Burgess Owens in Utah, who also represent majority white districts. Even as Republicans have made recent inroads, particularly with Hispanic voters in Florida and Texas, Democrats still outperform them in minority communities.

Unusual among not-yet-elected candidates, Mr. Hunt has already created a political action committee to make donations to others, which he named Hellfire PAC in a nod to his focus on helping those who are military veterans. Mr. Hunt has also been able to cultivate a roster of donors, raising nearly $4 million so far for his own run.

He is running in an area along Interstate-10 known as the energy corridor because of its high concentration of oil and gas businesses, executives and employees. To the extent that Mr. Hunt has firm policy goals, they revolve around questions of domestic energy production. In the interview, he said he hoped to be viewed as the “energy congressman.”

This is Mr. Hunt’s second try for Congress, having narrowly lost a bid to unseat Representative Lizzie Fletcher, a Democrat representing parts of western Houston and Harris County.

But rather than creating a more favorable rematch against Ms. Fletcher, a relatively moderate incumbent, during the redistricting process last year, Republican mapmakers redrew her district to make it safer, and created a new one — Texas’ 38th Congressional District — that would be a virtual lock for Republicans for the foreseeable future. The district would have overwhelmingly re-elected former President Donald J. Trump. (Mr. Hunt’s Democratic opponent will be chosen in Tuesday’s runoff election.)

Mr. Hunt and Ms. Garcia after speaking with community members in Cibolo. He has talked frankly about the need for Republican officeholders to better reflect the nation’s changing demographics.Credit…Christian K. Lee for The New York Times

He added that the fact that Mr. Hunt is Black could be seen as an asset, particularly when it comes to attracting suburban white Republican voters.

“It helps combat the notion that the Republican Party is racist: Hey, look, we have a white district, but we’re running a Black man in it,” said Mr. Evbagharu, who is Black.

Mr. Hunt said nothing had been given to him, pointing to his dominant performance in the Republican primary in March — in which he bested a field of 10 candidates without a runoff.

But he does not avoid the topic of race. Among the campaign advertisements from his first run is a spot highlighting his family’s history of enslavement.

“What I never want to do is ignore the clearly checkered past that we’ve had in this country,” he said in the interview at a corner table at Avalon Diner, a preferred breakfast spot for Houston power brokers. “I want to talk about the hope that we have that a descendant of a slave is now going to be a congressman in a predominantly white, Republican district. In Texas. That’s pretty cool.”

Mr. Hunt, who went to West Point, wears a bracelet to memorialize a deceased friend from the military.Credit…Christian K. Lee for The New York Times

Mr. Hunt is used to standing out in white spaces, starting at the elite private school he attended in Houston, more than an hour’s drive from his childhood home in a predominantly white northern suburb.

“When I got to St. John’s in middle school, I was one of two Black kids in my entire grade,” Mr. Hunt said. “But I was elected class president in eighth grade!” he said, laughing.

He said it was around that time he decided he was a Republican. He voted for Barack Obama in the Democratic primary in 2008, though he said he did so as part of an effort, promoted by Rush Limbaugh, to stoke disarray in Democratic ranks that election. “In many ways President Obama is actually why somebody like me even exists,” he said, adding that he voted for Senator John McCain, the Republican candidate, in the general election.

Mr. Hunt would go on to a military career, following the example of his father, who had been in the Army, and his two siblings, who like Mr. Hunt went to West Point.

During his time at West Point, Mr. Hunt said, he lived in barracks named for Robert E. Lee, the Confederate general, and said he would never want its name changed. “I loved walking in there and thinking to myself, there was a time when this general fought against the rights of people that looked like me, yet here I am,” he said. “If it were named anything different, I wouldn’t have that perspective.”

Mr. Hunt is almost certain to be elected to Congress in a majority-white district in and around Houston.Credit…Christian K. Lee for The New York Times

His views on most issues are well within the mainstream of Texas Republicans, attracting support from business conservatives and an endorsement in the primary from Mr. Trump. He supports recent restrictions on voting opposed by Democrats. He opposes transgender girls participating in youth sports as “just not fair,” and agrees with Gov. Greg Abbott that medically prescribed treatments for transgender children constitute “child abuse.”

For his supporters, Mr. Hunt is evidence that whom they vote for is driven by policy and ideology and not by what a candidate looks like.

“I hate this whole identity race stuff,” said Cody McCubbin, who works in the oil and gas industry and has held events for Mr. Hunt. “Personally I don’t care what people look like. It’s all about what’s between your ears.”

Still, Mr. Hunt said he often found himself fielding questions from his white friends about race, such as the moment when Will Smith slapped Chris Rock onstage during the Academy Awards in March. “My phone blew up immediately, asking what’s your take on this,” he said. “It was the ask-a-Black-guy moment. You always get one, and I’m totally fine with that.”

At the campaign event in Cibolo, the heat rose to near 100 degrees just before sundown. Mr. Hunt arrived, looking the part of a congressman in a fitted navy suit, pocket square and American flag lapel pin. He was beaming after what he said had been a successful meeting with executives at Valero, a San Antonio-based oil and gas company — “a big, big meeting for us,” he said.

If Mr. Hunt wins, he would be the third Black Republican in the House, joining Representatives Byron Donalds in Florida and Burgess Owens in Utah.Credit…Christian K. Lee for The New York Times

In his remarks endorsing Ms. Garcia, Mr. Hunt praised her support of more restrictions on abortion, more border fortifications, more gun rights and more support for schools. She joked that she had recently been on Fox News, but added, “I can’t get on prime time like you, Wesley.”

Sam Hines sat at the bar with his father and uncle. A police officer from the nearby town of Adkins, Mr. Hines, 29, came to the event to support Ms. Garcia — “she’s almost like a foil for A.O.C.,” he said, referring to Alexandria Ocasio-Cortez, a Democratic congresswoman in New York. He said he went away impressed by Mr. Hunt, whom he had never seen before.

“It’s good to have minority candidates be successful in the Republican Party,” said Mr. Hines, who is white. “It appeals to a broader base than a lot of people realize.”

Your Tuesday Briefing: A Mass Shooting Near Chicago

Where the Risks of Pregnancy Meet Abortion Laws and Health Care