Good morning. It’s Friday. We’ll look at an education panel that blocked New York City’s plan for allocating $10.5 billion in school funding. We’ll also look at the prospects for a raise for a small but important group of lawyers who haven’t had one since 2004. 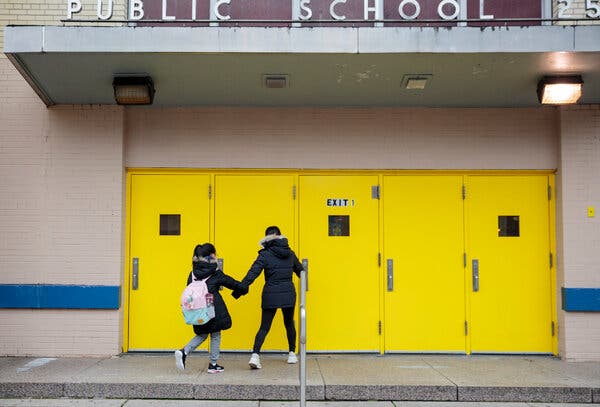 It would cause “the whole system to blow up,” said David Banks, the schools chancellor.

He was referring to an unexpected show of independence by the Panel for Education Policy, the governing body for the city’s public schools. On Wednesday the panel refused to approve Banks’s formula for allocating $10.5 billion in school funding and determining how much money each school should receive.

In the years since City Hall took control of the school system, the panel had largely rubber-stamped successive mayors’ policies. But twice in the last two months, the panel has balked at proposals from Mayor Eric Adams’s administration — a hint that the panel could become an obstacle as Adams pursues his education agenda.

The vote on the way the funds are to be divided up has implications for how public schools across the city prepare for the next school year, because a formula must be approved before the $10.5 billion in state and local funding can be distributed to roughly 1,500 schools. Nathaniel Styer, a spokesman for the education department, said the vote “will potentially delay school budgets and preparations” for 2022-23.

The vote against the formula was discomfiting for City Hall, coming at a time when Adams is fighting to keep mayoral control of the nation’s largest school system. He made a plea to state legislators — who will decide whether to renew it — during his State of the City address on Tuesday, saying “give us accountability.” The Legislature could demand concessions.

The panel was somewhat late in beginning its work this year. Adams, who took office in January, did not name his nine appointees before the first scheduled meeting. Then one of his appointees was removed after she was accused of anti-gay comments. She has yet to be replaced. (In addition to the nine members’ seats under the mayor’s control, each borough president appoints one member. Another is chosen by the presidents of the Community Education Councils, representing the city’s 32 school districts.)

The panel — which currently has eight members appointed by Adams — first voted against the administration a month ago, when it turned down an $82 million contract to pay for temporary staffing services. Last year, under Adams’s predecessor, Bill de Blasio, the panel killed a contract for the test for the city’s gifted and talented program.

Banks’s formula for 2022-23 was essentially the same as the current one. It included additional funds for students in several categories, including those who are in special education or are learning English. But it drew concerns that it did not do enough to account for the system’s neediest students.

The motion needed eight votes to pass. It got seven, all from mayoral appointees (one of Adams’s appointees missed the meeting). All five members appointed by the borough presidents abstained. Thomas Sheppard, the member who was named by the presidents of the Community Education Councils, voted no.

The panel’s next meeting is scheduled for May 18. Approving a formula then would be a problem for schools, which “must receive their budgets no later than mid-May to avoid systemwide disruption,” said Mark Cannizzaro, the president of the Council of School Supervisors and Administrators, the principals’ union. He said it was “simply too late” to start debating changes.

It’s another sunny day near the low 60s with wind gusts continuing through the night. The evening is mostly clear, and temps will drop to the low 40s.

In effect until Monday (Eid al-Fitr).

Since 2004 — when Michael Bloomberg was in his first term as mayor and Mario Cuomo was in his last as governor — court-appointed lawyers who represent New York City’s neediest clients have been paid $75 an hour for felony cases and family court matters and $60 for misdemeanor cases.

Those rates would be about $114 and $93 now if they had kept up with inflation. They have not.

My colleague Jonah E. Bromwich writes that one result is that fewer lawyers are taking these high-stress, high-stakes jobs.

The number of panel attorneys, as they are known — lawyers who can defend children or adults unable to pay their own legal fees — has dropped to 39 in Manhattan, from 70 six years ago. The number in the Bronx has fallen to 48 from 80 in the same time. Brooklyn and Queens have each lost about a fifth of their panel lawyers since 2011.

Another result is that the remaining panel lawyers are stretched thin. Helen Bua, a panel lawyer in Manhattan, had 130 clients earlier this year and has stopped taking new cases. “The work is never done,” she said in a court filing. “I rarely feel completely prepared.”

Cynthia Godsoe, a professor at Brooklyn Law School who previously worked in family court, said the failure to raise the rates reflected officials’ indifference to the lives of the most vulnerable.

“Family court, where these court cases happen, is a poor people’s court, by definition,” she said. “Not paying these attorneys remotely close to what they need to be able to do a good job, reflects either ignorance about or disdain for those people’s fundamental rights as parents and their lives as families.”

The panel lawyers are fighting for a raise. For three days last week, panel lawyers across the state declined to take on new clients as a way of calling attention to the issue.

At the same time, a lawyer for several New York-based bar associations also asked a State Supreme Court judge to set new salary rates and to remove limits that can keep panel lawyers from being paid for cases that exceed a certain number of hours.

The judge, Lisa Headley, has yet to make a decision. If she does not grant the lawyers’ requests, it would be up to the State Legislature and Gov. Kathy Hochul to raise the panel lawyers’ salaries. But the state did not include that money in the recently passed budget.

A lawyer for the state, Anjali Bhat, told Judge Headley during a hearing that Hochul and the Legislature were working on a solution and that Hochul “does not oppose doubling the rates,” but Bhat provided no additional information. A spokeswoman for the governor, Hazel Crampton-Hays, said that Hochul supports “a fair rate” and is “working to reach a solution to ensure indigent parties have effective assistance of counsel.”

I stepped out of the apartment building I had just moved into. It was an early September morning, and a light rain was falling.

My train was coming soon and it wasn’t pouring, so I decided not to go back upstairs for an umbrella and just headed to the station instead.

I passed a man who was out sweeping. He had a broom in one hand and a dustpan in the other.

“Hey, miss,” he said, speaking so quietly that I almost didn’t hear him. I thought he might have been talking to me, but as someone who has had plenty of bad interactions with strangers on the streets, I thought it seemed best to keep walking.

I wondered whether I might have dropped something. Before I could check my pockets, I heard him again, a little louder this time.

I turned. The broom in his hand had been replaced by a clear plastic poncho. He was wearing a yellow one with the hood up. Beads of water were running down the front.

“For the rain,” he said, extending his hand.

Tags
Had Sai̇d School That Who

Here’s Where Beach House Rentals Earn the Most Revenue

Won’t Somebody Please Think of the Fashion Models? (For Real.)