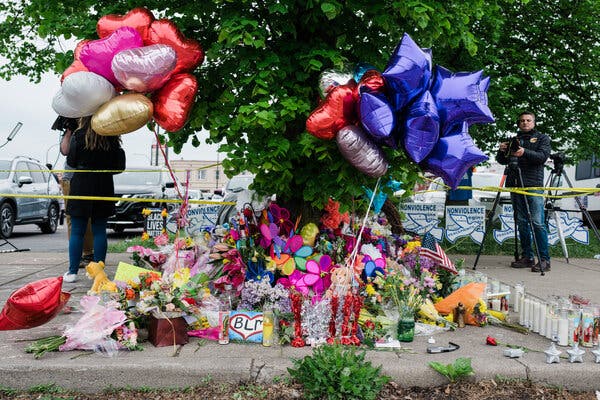 His screen name on the website Discord was Jimboiii. He posted racist and rambling remarks, including one that said “humanity will cease to develop if the White race is eliminated.”

Jimboiii was also the name used in a livestream from the mass shooting in Buffalo on Saturday that left 10 people dead. And as the posts provided details about the gunman’s motives, officials said he had planned a prolonged massacre, with the Buffalo police commissioner saying on CNN that the assailant had spoken “about possibly going to another store” and continuing the rampage.

The postings called into question the effectiveness of New York’s so-called red-flag law, which was intended to prevent people who pose a danger to themselves or others from possessing firearms. But nothing stopped Payton Gendron, the 18-year-old suspect in the supermarket shootings, from buying an assault-style rifle even though the state police had sent him for a mental-health evaluation.

At issue was a comment he had made at his high school about wanting to commit a murder-suicide. He characterized the remark as a joke, according to a law enforcement official familiar with the case.

The postings that came to light on Monday indicated he had lied his way through questioning. The state police confirmed on Monday that they did not seek a red-flag order against him. In the days before the attack, he posted pictures of himself and of the gun he used. He had written the names of other mass shooters on it with white correction fluid.

The postings, previously reported by The Washington Post, also suggested that he intended to stage his killing on March 15 to correspond with the anniversary of a 2019 attack at two mosques in Christchurch, New Zealand, that left 51 people dead. In a separate screed he is believed to have posted before the attack on Saturday, he expressed admiration for the gunman in the New Zealand assault.

Other details that emerged on Monday suggested that he had spent months considering possible targets. He decided against going to a predominantly Black elementary school in Buffalo, thinking it would be too hard to enter.

President Biden will visit Buffalo on Tuesday “to grieve” with families, including relatives of Ruth Whitfield, who at 86 was the oldest of the victims. On Monday her family demanded that officials do more to fight white supremacy and the widespread availability of guns often used in such mass shootings.

“We’re tired of losing our loved ones to senseless violence,” said Garnell Whitfield, a former Buffalo fire commissioner, flanked by his siblings as well as Ruth Whitfield’s grandchildren and great-grandchildren.

They were joined by Mayor Byron Brown of Buffalo. “The availability of guns in this country needs to change,” the mayor said. “People spreading hate through the internet and indoctrinating people in the ways of hate needs to change. The lack of services for people with mental health issues needs to change.”

It’s a sunny day near the mid-70s. The evening is mostly clear with temps in the mid-50s.

In effect until May 26 (Solemnity of the Ascension).

The guidance came as the city approached the orange, or “high” alert, level for Covid-19, a threshold it is expected to cross in the coming days. The increase is being propelled by the rapidly spreading Omicron subvariant, BA.2.12.1. The new advisory also called on those at higher risk for severe illness, including unvaccinated children under 5 and people over 65, to avoid nonessential indoor gatherings and crowded settings.

The recommendation is not a mandate. Mayor Eric Adams, who rolled back school masking regulations and vaccination checks at restaurants and theaters months ago, said on Monday that “we are not at the point of mandating masks.” Noting that hospitals are not overwhelmed with coronavirus patients and that treatments like antivirals are now available, he added, “We are not at the point of doing anything other than urging New Yorkers, while you are indoors in large settings, social settings, wear your masks.”

The Chelsea Hotel has had work done.

It is being unsheathed. Unshrouded. Uncloaked.

The Hotel Chelsea, the bohemian oasis that everyone from Thomas Wolfe to Jack Kerouac to Sid Vicious once called home, has had some work done in recent years — a lot of work. But it looks the same outside, or its owners say it will when the cloud of black netting and scaffolding covering its front face is fully removed. Some is already gone, but windy days last week prevented crews from taking more off.

Ira Drukier, one of the owners, said the facade work has been completed, although he said the scaffolding and construction bridge over the sidewalk would remain until a city inspection is conducted. He said the refurbishing inside would be “presumably 100 percent complete” in the summer.

The Chelsea now has 155 hotel rooms, plus about 45 apartments for long-term tenants who have lived through seemingly endless construction — and about two years when work was stopped.

The renovation included the installation of new doors on the rooms to conform to city fire regulations. The old doors, salvaged by a former resident, were sold at auction four years ago. And El Quijote, the Spanish restaurant on the first floor that closed in 2018, has reopened. Pete Wells, our restaurant critic, wrote last month that “the city’s antiquarian-bohemian axis feared it would be destroyed or at least cleaned up beyond recognition.”

“Most of those worries can be forgotten,” he said, and as for the food, “the old recipes have been retired, as they should have been.”

Upstairs, the president of the tenants association is happy, but friction lingers. The tenants association represents about 40 longtime residents. Drukier and Zoe Pappas, its president, say they have been at odds with several others, and there is a tangle of charges and countercharges, lawsuits and administrative proceedings.

Leon Behar, a lawyer for the tenants at odds with the owners, said last week that people in the building “still experience lack of hot water/no hot water (running the water for 30 minutes or more before being able to shower.” Drukier called that “not true” and said tenants alleging it “won’t let us in” to troubleshoot.

Debbie Martin, another longtime tenant who said last year that conditions had deteriorated since construction restarted, reported last week that the noise “has abated somewhat on my floor” lately. Still, she added by email that “my windows are blocked by boards, steel pipes and netting, and basic services are still not reliable.”

But Pappas, of the tenants association, called the remodeled Chelsea “magnificent.”

“This hotel is like a phoenix,” she said. “It has a totally new infrastructure. The details and the redoing of how the interiors looked and the quality that was put in should make everybody very proud to say they live in the Chelsea.”

When I was a graduate student at the Manhattan School of Music in the mid-1970s, I had a work-study job covering the front desk after hours, which involved answering the occasional phone call and doodling on message pads.

One day, I was asked to deliver some flowers around the corner, on Claremont Avenue, to the pianist Rosina Lhévinne. A friend who was a voice major and more worldly than I was begged to come along.

Arriving at a ground-floor apartment, we were greeted by Ms. Lhévinne’s caregiver. After accepting the flowers, the caregiver asked if we would like to meet Ms. Lhévinne.

We found her in bed looking frail. She extended a hand. All I could think to do was kiss it, as if she were royalty.

She asked which instrument I played.

“Baahh,” she answered in a low whisper, imitating the sound.

Girl, 11, Is Killed by Stray Bullet in the Bronx