KABUL — When Fariba Mohebi, an 11th grader, learned in September that most Afghan girls would not join boys returning to school under Taliban rule, she shut the door and windows to her room. Then she broke down and sobbed.

From her despair, a poem emerged: “Why Was I Born a Girl?”

Fariba’s poem found its way to Timothy Stiven’s A.P. history class at Canyon Crest Academy, a public high school 8,000 miles away in San Diego. It was relayed via Zoom calls between Canyon Crest and Mawoud, a tutoring center Fariba now attends in Kabul, where girls sit in class with boys and men teach girls — testing the limits of Taliban forbearance.

Periodic Zoom sessions between the Afghan and American students have opened a window to the world for girls at Mawoud, hardening their resolve to pursue their educations against daunting odds. The calls have also revealed the harsh contours of Taliban rule for the California students, opening their eyes to the repression of fellow high schoolers halfway around the world. 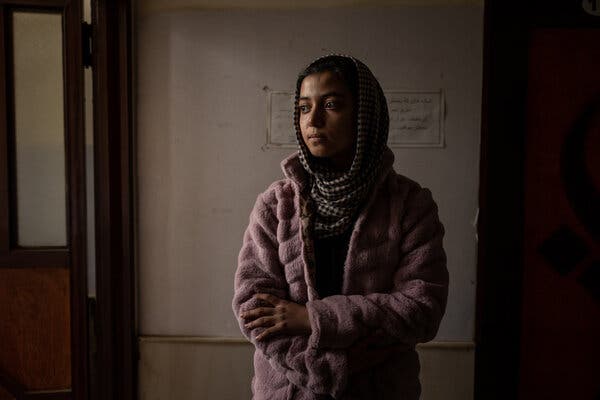 Fariba Mohebi, an 11th grader at Mawoud who writes poetry.

“If I was a 10th as courageous as these girls are, I would be a lion. They are my heroes,” Diana Reid, a Canyon Crest student, wrote after a Zoom call this month in which Afghan girls described navigating bombing threats and Taliban interference.

For the Afghans, the Zoom sessions have been a fun novelty, and a reminder that some Americans still care about Afghans five months after U.S. troops withdrew in chaos and the American-backed government and military collapsed.

“We are so happy we are not alone in this world,” Najibullah Yousefi, Mawoud’s principal, told the San Diego students via Zoom. “There are some beautiful minds on the other side of the world who are concerned about us.”

The Zoom calls were arranged in April by Mr. Stiven and Mr. Yousefi. An early topic of discussion was Fariba’s poetry, translated by Emily Khossravia, a Canyon Crest student, and published in the school magazine. “Why Was I Born a Girl” prompted an in-depth education in Afghan realities for the American students.

The class has learned that Afghan students risk their lives just by walking through the tutoring center’s fortified gates. Mawoud’s previous location was leveled by a suicide bombing that killed 40 students in 2018. The school’s new building, tucked into a tight bend in a narrow alleyway, is protected by armed guards, high walls and concertina wire.

Students of Mawoud greeting students in the U.S. during a Zoom class.

Most of Mawoud’s 300 students are Hazara, a predominately Shiite Muslim minority ruthlessly attacked by the Islamic State in Afghanistan, ISIS-K. Hazara schools, protests, mosques, a New Year’s celebration and even a wrestling club have been bombed by ISIS-K since 2016, killing hundreds.

Since the Taliban takeover, several commuter minibuses used by Hazaras have been bombed in the Hazara district of west Kabul known as Dasht-e-Barchi. At least 11 people have been killed and up to 18 wounded, most of them Hazaras, the Afghan Analysts Network reportedThe Taliban, who persecuted Hazaras in the past, are now responsible for their security. The analysts’ independent research agency described the Taliban government response as tepid, saying it downplayed the strength of ISIS-K, which claimed responsibility for most of the attacks. On Jan. 14, Afghan media reported that a young Hazara woman, Zainab Abdullahi, was shot and killed at a Taliban checkpoint just five minutes from the Mawoud center.

The San Diego students have learned, too, that attending class is a leap of faith for Fariba and her female classmates, who make up 70 percent of Mawoud’s student body.

Mawoud prepares students for Afghanistan’s rigorous university entrance exams. But there is no guarantee that girls will be permitted to take the annual exams — or to return to high school, attend a university, or pursue a career in a country where the Taliban have begun erasing most women from public life.

The Taliban have said they hope older girls will return to schools and universities, under Islamic guidelines, by late March. Except for some schools in northern Afghanistan, most Afghan girls above the sixth grade have not attended school since August.

Students of Mawoud in the tutoring center’s hallways. The San Diego students have learned that attending class is a leap of faith for female students at Mawoud.

Mr. Yousefi said that Taliban officials who have visited the tutoring center have not laid down specific rules, as they had at some public schools. He said they have merely stressed adherence to “Islamic values,” interpreted as separating boys and girls and requiring girls to cover their hair and faces.

When Mr. Yousefi told the Talibs that a nationwide teacher shortage made it nearly impossible to segregate classes by gender, “They did not have any logical reply for me,” he said.

For the American students, the Mawoud girls’ accounts of perseverance — delivered in near-fluent English — have been both sobering and inspiring.

“I can hardly imagine how difficult that must be, and the courage the girls must have to be sitting alongside male students after facing suicide bombings,” Selena Xiang, a Canyon Crest student, wrote after this month’s Zoom call. “It’s so different from my life, where education is handed to me on a silver platter.”

Alice Lin, another student, wrote: “They are stronger, more determined, more steadfast in belief than I have ever been, and I cannot help but think: What if the Mawoud girls had been given my life?”

And Ms. Reid said she was struck by something one of the Mawoud students said over Zoom: “Knowledge is powerful — and the Taliban knows it. That’s why they keep it from us.”

Fariba, 16, the poet, said of the San Diego students: “They have motivated us to achieve our goals — and for me, my goals are very big.” She said she wanted to become a famous poet and a cancer researcher.

Zalma Nabizada, another Mawoud student, said, “I lost my motivation and was in darkness after the Taliban came.” But she said that the Zoom sessions had helped nudge her to keep trying to achieve. She wants to become, she said, “a star that shines.”

A security guard at the entrance of the tutoring center. Hazara schools and other sites have been targeted by ISIS-K.

A sign, in English, hangs in a hallway at Mawoud: “Dreams Don’t Work Unless You Do.”

Before suicide bombs killed students at Mawoud in 2018 and at a nearby tutoring center attended by Hazaras in 2020, Mawoud had 3,000 students. Since the bombings and the Taliban takeover, the size of Mawoud’s student body has dropped by about 90 percent, the principal said.

Some Mawoud students fled with their families to Pakistan or Iran. Others have stayed home, afraid of bombings or Taliban harassment. Fariba said she spent weeks persuading her parents to let her attend the center.

The center’s guards turned to hunting rifles after the Taliban refused to let them carry assault rifles, Mr. Yousefi said. When students walk to and from the center, the principal instructs them to travel in small groups, to avoid presenting a mass target.

On a recent freezing morning, the Zoom session was frequently halted by technical problems, but each re-established connection was greeted with cheers and whoops from both classes.

There was a heartfelt discussion of a question posed by a Mawoud girl: How do you cope with loneliness? There was near silence when a Mawoud student, Sona Amiri, displayed her soccer medals, then said girls had stopped playing soccer after the Taliban takeover.

Sona Amiri, the soccer player, with her medals during the Zoom class.

Another Mawoud student displayed his oil paintings, then told the San Diego students that the Taliban have cracked down on artists, forcing them to paint, draw and perform in secret.

Other Mawoud students described dreams of graduating from high school and university, and of pursuing careers as doctors, journalists, lawyers, poets — and for one girl, as Afghanistan’s ambassador to the United States.

They spoke, too, of never backing down. “This bad situation can make a person more powerful,” Ms. Amiri, the soccer player, told the American students.

Aaron Combs, a Canyon Crest 10th grader, responded moments later, “The fact that every one of you guys are brave enough to speak up for yourselves is incredibly inspiring.”

Afterward, Fariba, the poet, said the sessions with the American students did lift spirits, at least for a while. But for her, a heartwarming Zoom discussion can’t soften the daily indignities and terrors endured by a young Hazara woman in Afghanistan.

“We prepare ourselves mentally for the worst,” Fariba said just after the Zoom screen had gone dark. “It’s terrible to say, but that’s our reality.”

Why Boris Johnson May Finally Have Gone Too Far