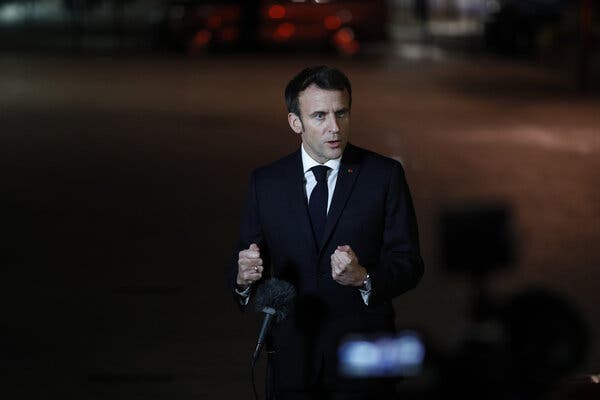 Macron tries to mediate over Ukraine

The standoff with Russia over Ukraine is at a critical point. The U.S. has snapped NATO to attention and moved forces east, while Moscow has readied still more soldiers on the Ukraine border. But beneath those tensions, diplomatic avenues are being feverishly explored and the outlines of potential solutions, still amorphous, may be taking form.

Emmanuel Macron, the president of France, is meeting with Vladimir Putin, his Russian counterpart, today in Moscow. At the same time, President Biden will be meeting with Olaf Scholz, the German chancellor, in Washington. Macron has positioned himself at the center of the diplomacy in Europe, giving him an opportunity to step into a larger leadership role.

For Macron, the risks are as great as the potential payoff. Solutions to the crisis seem fiendishly elusive for now, even if Putin has appeared less directly threatening toward Ukraine over the past week. With its huge concentration of troops at the Ukrainian border, Russia is still threatening a war, and its grievances against NATO continue to fester.

In Ukraine: Moscow is not yet ready to breach Ukraine, but parts of Russia’s army appear to be in the final stages of preparation for military action, according to a Ukrainian military assessment. U.S. officials said that a large-scale Russian invasion could kill as many as 50,000 civilians and prompt a refugee crisis across Europe.

Updates from the Winter Olympics

Unpredictable weather conditions in Beijing are raising concerns about scheduling, danger and fairness. With gusts of 15 miles per hour and up, the wind has already knocked out two official days of skiing. The downhill, Alpine skiing’s showcase event, has been postponed from yesterday to today, between runs of the women’s giant slalom.

For the first time, athletes at the Winter Olympics are competing almost entirely on artificial snow. China’s herculean investments in snow-making are part of larger efforts to turn the arid mountains near Beijing into a permanent ski and snowboard hub, a project that could face challenges as climate change upends patterns of rainfall and drought.

Even then, the outcomes of top races are hard to predict: The world’s best skiers don’t always win at the Olympics. Years of preparation and training can mean little if conditions and circumstances do not cooperate. Nothing solidifies an athlete’s status as one of the greats like an Olympic medal. But those medals can be won, or lost, in as little as two minutes.

Geopolitics: China’s leader, Xi Jinping, on Friday opened an Olympic Games intended to celebrate his country’s increasingly assured global status. He stood alongside Vladimir Putin, the Russian president, in a calculated display of solidarity to show their partnership and project their growing impatience with Western censure.

Here’s a schedule, a photo roundup, a list of rivalries to watch, the medal count and live updates.

Beds were placed in the hallway of a children’s hospital in Kabul because there wasn’t enough space in the wards.Credit…Jim Huylebroek for The New York Times

Hospitals and clinics in Afghanistan are struggling to stay afloat amid a funding shortage and a vast surge of malnutrition and disease. By one estimate, 90 percent of the country’s health clinics are likely to shut down soon.

Since the Taliban regained power last year, three-quarters of Afghanistan’s 40 million people have been plunged into acute poverty, with 4.7 million Afghans likely to suffer severe malnutrition this year, according to the U.N. Last month, the organization made its biggest appeal ever for a single country, asking donors to give more than $5 billion to fend off disaster.

Before the U.S.-backed Afghan government disintegrated in August as the Taliban overran the country, the health system relied on international aid to survive. But much of that funding has been frozen to comply with sanctions imposed on the Taliban.

Aid: While there have been infusions of aid, including $308 million in relief authorized by the U.S., they haven’t been enough to cover 1,200 health facilities and 11,000 health workers.

Europe: Educated Afghan refugees are welcomed in the E.U., butthey struggle with their lives in exile. And their poorer compatriots are often shunned.

Ten years ago, psychologists proposed that a wide range of people would suffer anxiety and grief over climate change. At the time, the notion was seen as speculative.

But that skepticism is fading. Eco-anxiety, a concept introduced by young activists, has entered a mainstream vocabulary. And professional organizations are now exploring approaches to treating anxiety that is both existential and, many would argue, rational.

Loosely based on a 2019 mission by Russian military operatives to put down an insurgency in Mozambique, the Russian film “Granite” is the latest blockbuster aiming to retell Russia’s story in Africa. The film features Russian mercenary warriors who save beleaguered African villagers from jihadists.

Writing in the news site Carta de Moçambique, the Mozambican journalist Marcelo Mosse began his review of the film with a single word: “Hahaha.” It was, he wrote, “a kind of docudrama promoting mercenarism.” For Mosse and others, the film raises uncomfortable questions about Russia’s role in Africa.

It’s not the first time Russian filmmakers have looked to mercenaries in Africa for inspiration. Last year, the film “Tourist” depicted the heroics of Russian mercenaries in the Central African Republic with the same blood, gore and clichés. Russian news media outlets have reported that the film’s production company has ties to Yevgeny Prigozhin, an oligarch who is close to Vladimir Putin.

Try this easy version of coquilles St.-Jacques, the classic French preparation of scallops in a creamy sauce.

“Abbott Elementary” is a new mockumentary about a group of (mostly) dedicated educators in an underfunded public school in Philadelphia.

Here’s today’s Mini Crossword, and a clue: Person I used to be (five letters).

P.S. Sign up to receive the latest from the Winter Olympics with our Olympics Briefing.

The latest episode of “The Daily” is on the “zero-Covid” Olympics.

Lynsey Chutel wrote today’s Arts and Ideas. You can reach Natasha and the team at briefing@nytimes.com.

How Failure Forced Canada Into a Curling Reckoning

Biden Will Press German Chancellor on Russia Sanctions and Pipeline