We’re covering a delegation of American lawmakers in Ukraine and a campaign by young Filipinos to upend this month’s presidential election. 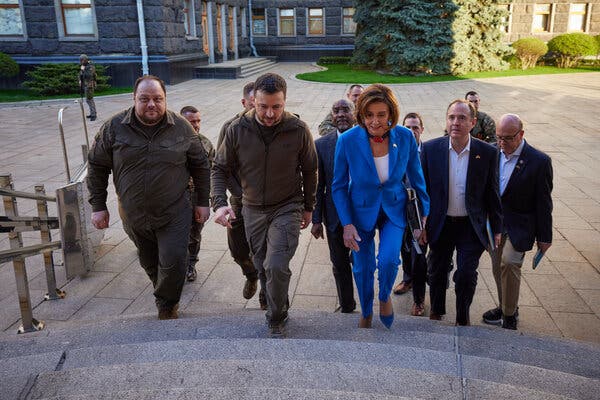 House Speaker Nancy Pelosi met with President Volodymyr Zelensky of Ukraine and became the most senior American official to visit its capital, Kyiv, since the start of the war.

The visit, which was kept secret until Pelosi and a small delegation of Democratic lawmakers were safely in Poland, came as the Biden administration cast aside early fears that too much U.S. assistance to Ukraine would risk a direct conflict with Russia.

In eastern Ukraine, some 300 miles from Kyiv, artillery fire thundered up and down the country’s eastern front. The Russian Defense Ministry said on Sunday that it had struck 800 targets over the past day, including a hangar in the port city of Odesa that the ministry said was storing weapons and ammunition delivered by the U.S. and Europe.

Russian forces now in control of the southern Ukrainian city of Kherson and its surrounding province started to enforce a transition to the Russian ruble from Ukrainian currency. Around the same time, nearly all internet and cellular service in the region went down. Fighting has intensified around Kharkiv, once Ukraine’s second largest city.

Evacuation: Women and children who had been confined to bunkers beneath a sprawling steel plant in Mariupol began to make their way to safety on Sunday.

Foreign fighters: The deaths of three foreigners killed this week while fighting with Ukrainian forces has drawn renewed attention to thousands of largely unregulated volunteers who have gone to fight Russia’s invasion.

As China struggles with Covid, Xi admits no doubts

As the coronavirus surged through China’s biggest cities in April, and 25 million residents of Shanghai were ordered to stay at home for weeks, China’s leader, Xi Jinping, gave no public speeches about the topic.

Xi remained behind the scenes, as complaints of scarce food and overwhelmed hospitals intensified. That distance has allowed Xi to avoid grappling with the challenges of his zero-Covid strategy, which has become a core of his political messaging.

China’s struggle to tame its biggest spike in Covid infections has tested Xi’s acumen and authority before an important Communist Party congress late this year. He is nearly certain to win a groundbreaking third term as party general secretary. But he also wants to ensure that the leadership is dominated by loyal officials, and economic damage could soften Xi’s power to corral elite support behind his picks.

Background: Xi’s leadership has been so invested in demonstrating China’s capacity that the government held off from introducing mRNA vaccines developed abroad, which are generally more effective than China’s homegrown vaccines.

Related: With Covid cases accumulating in Beijing, officials over the weekend imposed a ban on dining in restaurants and will require negative test results to enter public spaces.

A rally for Leni Robredo last month in Pampanga, the Philippines.Credit…Hannah Reyes Morales for The New York Times

Young Filipinos are rallying to upend an election

Millions of volunteers — many of them first-time voters or still too young to vote — have signed up in hopes of altering the likely path of this month’s presidential election in the Philippines.

Their energy stems from an increasing frustration among the country’s youth, many of whom fault President Rodrigo Duterte for the widespread violence and discontent in recent years. With at least half of the record 65 million registered voters between the ages of 18 and 30, many young Filipinos are seeking to elect Leni Robredo, the vice president and an outspoken critic of Duterte.

Ferdinand Marcos Jr., the namesake of the country’s late dictator, is far ahead in polls, and many of Robredo’s young supporters are united in seeking to block him from winning the presidency. Aside from the human rights abuses committed during his father’s 20-year rule, Marcos — known by his nickname, Bongbong — has been convicted of tax fraud, refused to pay his family’s estate taxes and misrepresented his education at Oxford University.

Disinformation: Robredo’s young supporters are also fighting against a disinformation campaign that has lionized the Marcos era and vilified Robredo as a communist. Spliced videos have also portrayed her as stuttering and unintelligent.

Asia and the Middle East

Ruins in Mandatah Village, where an airstrike killed 27 members of one family this month. Credit…The New York Times

A man with a digital prayer counter in Jerusalem’s Old City. Credit…Afif Amireh for The New York Times

Many Muslims around the world have long used prayer beads for religious recitations and praises. The practice, which is in addition to the five daily prayers most perform,infuses religious remembrance into their days. Increasingly, Palestinians have turned to digital prayer counters to track their recitations.

Day-to-day life during a war

The Times’s Claire Moses chatted with our colleague Michael Schwirtz, who has covered Russia’s invasion of Ukraine from its beginning, about living in a country upended by war.

Claire: Hi, thanks for talking during dinner.

Michael: When I’m eating, I’m good. It’s a Greek salad. And I’m drinking a beer — it’s a small thing, but in the beginning of the war there was an alcohol ban in the entire country. People were really disciplined about it. Everyone thought Russia was going to attack at any moment and they had to be ready to fight, and the ban was part of that. A lot of people had acquired guns.

What do Ukrainians do with their time now?

Many people aren’t working. There are volunteers everywhere. There’s a huge volunteer operation to make sure troops are comfortable, providing food, sewing flak jackets and clothing and bedding. Some people are donating their cars. They’re raising money for night-vision goggles and drones. It’s a massive operation.

Patriotism became more intense after 2014, but now it’s inescapable. For example, I can’t get the Ukrainian national anthem out of my head. You hear it in cars, in shops, in the grocery store. It’s not like people stop and put their hands on their hearts. But I’m going around humming it.

For more, read the full conversation in The Morning newsletter.

Katsu, the Japanese-style fried cutlet dish, is made just a bit healthier in this version prepared with tofu slabs.

In this week’s pop playlist, our critics recommend tracks by Sam Smith, Regina Spektor, Tokischa and others.

P.S. Erika Solomon, who has reported extensively in the Middle East and Germany, is joining the Times’s International desk as a correspondent in Berlin.

The latest episode of “The Daily” is about the U.S. approach on Ukraine.

You can reach Matthew and the team at briefing@nytimes.com.

Tags
People That This Ti̇me Ukraine

Pelosi and Democratic lawmakers vow the U.S. will stand with Ukraine.