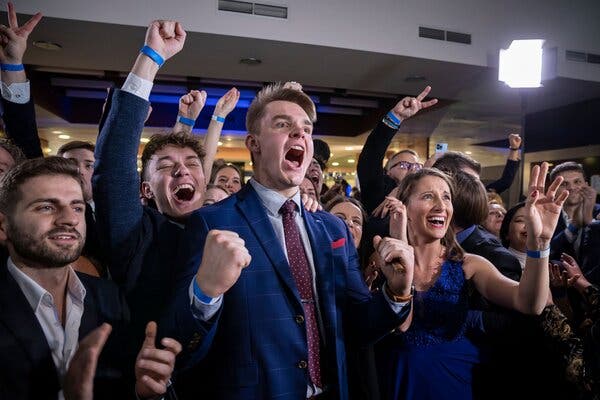 Supporters of the Czech Republic’s opposition coalition celebrating the election results on Saturday in Prague.Credit…EPA, via Shutterstock

What the Czech elections mean for Europe’s strongmen

This past weekend, Andrej Babis, the Czech Republic’s seemingly invincible populist leader, was the unexpected loser of its elections, after a coalition of previously divided center-right parties united against him. They had a simple, clear message: We can beat Babis.

The success of these Czech opposition parties could have major repercussions in the region and beyond. For the past decade, strongman leaders disdainful of democratic norms have risen to power around the world. Now, opposition leaders are mobilizing, trying to forge unified fronts and oust populist leaders in upcoming elections.

In Hungary, for instance, six parties across the political spectrum are collaborating to oppose the party of Viktor Orban, the right-wing leader who has become a standard-bearer for “illiberal democracy.” And in Poland, Donald Tusk, a former prime minister and European Council president, hopes to rally the main opposition party and people who often do not vote, and to lure support from a plethora of other opposition groups.

Quotable: “Populism is beatable,” said Otto Eibl, the head of the political science department at Masaryk University in the Czech city of Brno. “The first step in beating a populist leader is to suppress individual egos and to compromise in the interest of bringing a change.”

Five people were killed and two more wounded in an attack yesterday evening by a man using a bow and arrows in the Norwegian town of Kongsberg, outside Oslo. It was the deadliest attack in Norway in a decade, the authorities said. A 37-year-old Danish man living in Kongsberg has been taken into custody.

The killings have left a country where murder is extremely rare on edge, as Norwegians waited to learn what had happened — and why.

“The incident has left us all shaken,”said Erna Solberg, the Norwegian prime minister. “The news is terrifying. I understand that people are getting scared.”

The killings mobilized public services nationwide. Hospitals were put on alert, as was the Justice Ministry. Specialized national police units were summoned, and helicopters circled over the scene of the attack. Across the country, the Norwegian police, who are usually unarmed, were given special authorization to carry weapons.

Motive: “It is natural to consider if it is a terror event,” Oyvind Aas, an assistant police chief, said, adding that it was “too soon to say for sure what the man’s motivation is.” Investigators are not looking for accomplices.

People who received a Johnson & Johnson Covid vaccine might be better off with a booster shot from Moderna or Pfizer-BioNTech, a new study found.

Separately, the authorities in China have begun rolling out third shots of vaccines for high-risk groups as the country races to meet its goal of fully vaccinating 80 percent of its population by the end of the year. The W.H.O. has recommended an additional dose for people over 60 who were inoculated with vaccines made by the Chinese companies Sinopharm and Sinovac.

News From the U.S.

The pristine beach of Katoku, in southwestern Japan, is one of the country’s last. Soon, it will be filled with concrete for a sea wall to curb erosion.

Even the most precious ecological treasures are struggling to survive Japan’s construction obsession, which has long been its answer to natural threats. The push to build is also a vital source of economic stimulus in rural areas — though this plan has torn a tiny village apart.

Timothée Chalamet and Rebecca Ferguson in a scene from “Dune.”Credit…Chiabella James/Warner Bros.

A “Dune” that fans will love

At a screening this year of Denis Villeneuve’s hugely anticipated adaptation of Frank Herbert’s classic sci-fi novel “Dune,” Helen Macdonald, a contributing writer for The Times Magazine, caught herself whispering “Oh, my God” under her breath over and over again.

“Afterward,” she writes, “I walked along empty streets with my head full of deserts and burning date palms, vast ships, monstrous sandworms and a sense of wonderment that the book’s visions had been so exquisitely realized.”

Dune’s history is a graveyard of cinematic hopes, bringing despair and disappointment to David Lynch and Alejandro Jodorowsky, among others. Villeneuve’s take hews as closely to the book as possible, the director said, and to reality over the supernatural.

Featuring stars like Timothée Chalamet, Oscar Isaac, and Javier Bardem, “Dune” was three and a half years in production and cost approximately $165 million to make. Villeneuve declined offers of the very latest in C.G.I. in favor of real desert landscapes in Jordan and the U.A.E.

“For my own mental sanity,” the director said, “to be able to inspire myself to find back that feeling I was looking for of isolation, of introspection.”

Read more about the movie.

The documentary “Introducing, Selma Blair” is an unflinching account of the actress’s life with multiple sclerosis and the stem-cell transplant she underwent to treat it in 2019.

Cursed for life? Not so fast, say the witches in “The Book of Magic,” the final installment of Alice Hoffman’s Practical Magic series.

P.S. Elizabeth Dias and Ryan Christopher Jones were honored by the Religion News Association for excellence in religion reporting, and Laurie Goodstein was given the lifetime achievement award.

The latest episode of “The Daily” is on the impossible choices Afghan girls face under Taliban rule.